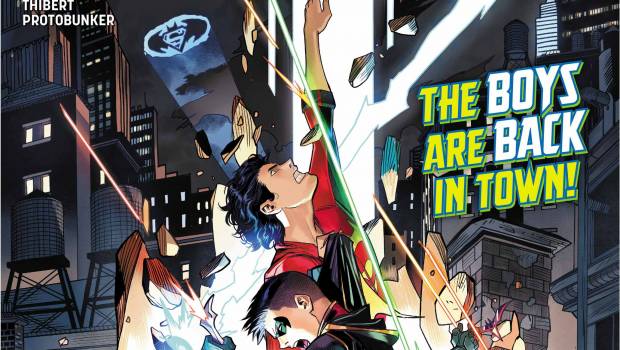 Adventures of the Super Sons #1

Jonathon Kent and Damian Wayne are back!  The sons of Batman and Superman return in this issue for a 12-issue run being advertised as a maxi-series.  Adventures of the Super Sons take place in the aftermath of their previous title, and prior to Jonathon Kent leaving Earth with Jor-El. 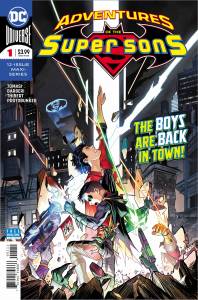 There are two covers to this issue.  A standard cover featuring the Super Sons bursting out of the roof of a building, Superboy carrying Robin as he fends off strikes from what appears to be a horde of villains below them.  These villains appear to be a mix of Justice League rogues, which suggests that the duo may be in over their heads.  The art on the cover is sharp, and the book looks very fun and dynamic at first glance. 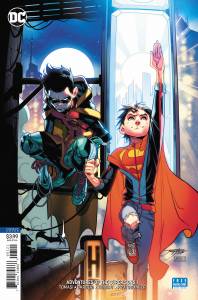 The variant cover is a little darker than the primary.  It features the duo on a rooftop, Superboy backlit by a neon sign, and Robin the darkness beside him.  The book showcases the contrast between the two of them, with Superboy being the bright and optimistic hero, and Robin the dour pessimist.  It doesn’t look as dynamic and exciting as the standard cover but is still a beautiful cover.

This art in this book is beautiful.  It is very well drawn, with strong attention to every aspect of the characters, from body language, to facial expressions, to the background.  Part of what is so fun about this book is the contrasts between the two leads.  Robin is dark, Superboy is light.  Every scene they are in together highlights this, and it helps set the tone for the whole book.  This has always been a strong series artistically, and this issue is no different. 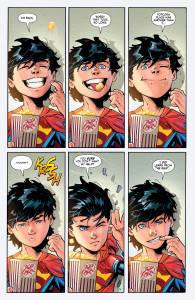 The story begins in Metropolis in the not too distant past.  Superboy is eating popcorn and watching Robin as he battles a large statue of Superman that is being controlled by an outside source.  Superboy takes over the battle and Robin tracks down the true villain, The Puppeteer.

The issue then switches to the two of them leaving school for the summer and preparing for a summer of full time super-heroism.  The duo head to their now repair underwater headquarters and begin to search for some villainy to stop.  The pair of them have a lot of fun banter, and the way that they interact is a lot of fun.  The friendship feels very organic and not forced.

The villains of the issue make a quick early appearance as well, and though not much is given away, they feel younger, and are clearly not from Earth.  Who they are is revealed at the end of the issue, so I will not spoil that here.

This issue follows in the footsteps of the previous Super Sons series.  It is a fun look at the Super Team of Superboy and Robin, and the friendship of Jonathon Kent and Damian Wayne.  It is as much a Superhero book as it is an exploration of youthful friendship.  The art is strong throughout the series, and really just contributes to the book being strong all around.  It does pick up where the previous series ended, so some familiarity with that book does help.  However, it is very easy to get into and given that it is the start of a new series and new arc, is a great place to step into these characters.

For being an all-around fun and well done book, I give this issue 4.5 stars out of 5. 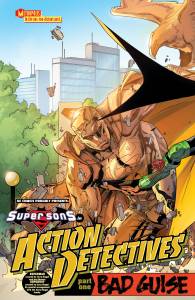 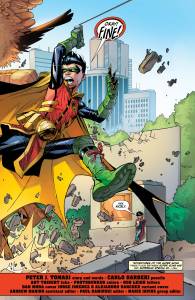 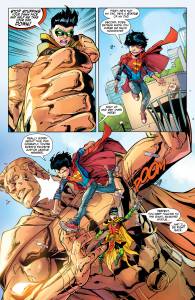 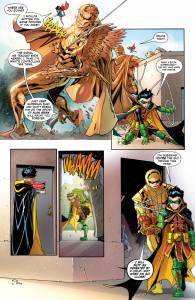 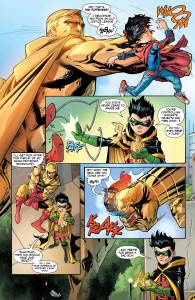