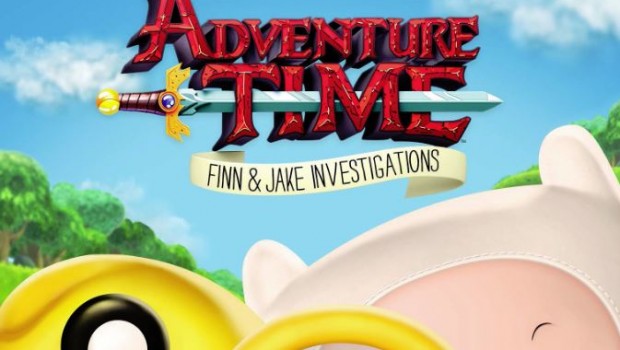 Developed by Vicious Cycle and based on the hit Cartoon Network original series, Adventure Time: Finn and Jake Investigations is first and foremost an adventure game, but it is one that also features combat.  Players will be able to dive right into both kinds of gameplay within each section of the game! With an action-oriented twist on the classic story-driven game, players must find and use objects (including Jake), and interact with characters in order to solve puzzles and progress through the game. Play as Finn (with Jake at your side) and be immersed in the Land of Ooo, talk to new and familiar inhabitants, battle evildoers, and unravel mind-bending puzzles in five playable chapters. Through this one of a kind experience, players will feel as if they’ve stepped into their own personal episode of Adventure Time!

For the first time ever, bonus downloadable content will be available in an Adventure Time console game in the form of an adventure featuring Finn and Jake’s friend Marceline the Vampire Queen. Just like the five chapters built into the game, this additional chapter plays out like an episode of the series, with players taking on the persona and vampire abilities of Marceline. In this original adventure, Finn and Jake discover that Marceline sold all of the magical but potentially dangerous artifacts they have collected in a Yard Sale. Help Marceline and our heroes retrieve all the artifacts before chaos and calamity take over the Land of Ooo! The Marceline DLC will be available now

Let’s take a look at the Tree House! It all begins at Finn and Jake’s Tree House, which serves as the central hub of the game.  Investigators are invited to make their way inside and begin each of their adventures in the easy-to-explore tree house complete with multiple rooms, each stocked with cool interactive items from the show.  For the first time, Adventure Time fans can explore every single room in glorious 3D detail.  From the front yard, to the treasure room (where players will collect their loot), the kitchen, bedrooms, living room, attic and more, players will be able to interact with their favorite characters from the show and explore like never before.

My Kingdom for a… great view in 3D! With likenesses incredibly true to the series, Adventure Time: Finn and Jake Investigations will allow players to see as much as they can of the Land of Ooo and its kingdoms in a way never before seen.  Each chapter of the game will take players to more kingdoms and give them an opportunity to visit key locations in each unique kingdom.  From the Candy Kingdom (loaded with all kinds of lush sweets) to the Ice Kingdom (filed with pointy, snow-capped mountains and snowy hills) and Wizard City (a magical settlement with a marketplace!)  to Maja’s (the sky witch’s) Forest, they are all there in gorgeous 3D.

Additionally, secret un-lockable bonus locations are scattered throughout the game and will include spooky forests and subterranean dungeons.