Summary: ADR1FT makes you an astronaut and then, tries to kill you. Survive, find out what happened, and figure a way back to Earth.

Can you survive in space?

Developers Three One Zero have brought an absolute incredible experience to Virtual Reality. The immersive game design and choices put into the game really show that the developers have a firm grasp at the true potential for this new medium which of course is virtual reality. Furthermore, ADR1FT makes great use of the Unreal Engine 4, making for some spectacular first person perspective game play.

What is great about this story and the adventure is that there are no monsters or science fiction baddies or aliens. For the most part it just deals with people working and living in the dangerous environment of space. Space, where the most minor thing could mean a matter of life and death.

In this game players take on the role of Commander Alex Oshima. Like a good movie or good story in a book, the adventure starts off with great peril right away. We wake up from being unconscious and are floating in space. All around us is debris and large chunks of a destroyed space station.

We have no idea what happened, or what events took place. All we know is waking up in this predicament.

Right away the reality of mortality comes into being. We are a long way from mother Earth so far below, and the suit is damaged and bleeding oxygen. 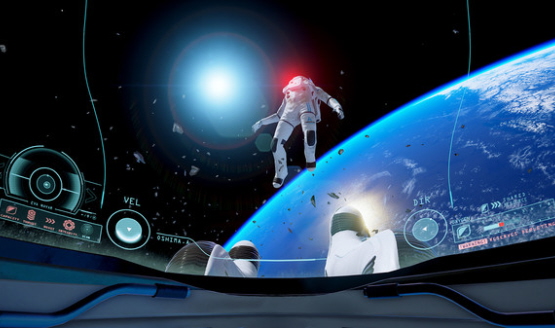 So as we move around and are using up oxygen and losing it through the damaged suit… we must find oxygen bottles that give us a bit of an oxygen boost to keep us alive a bit longer. So traveling too far where we do not see any oxygen bottles floating around is a very bad idea. This bit of game and storytelling has been done before to relay a sense of urgency in finding another oxygen bottle however in no other game does it resonate as so immediate as it does here in ADR1FT.

Travel we must though, because we have to piece things together on what happened. We do this by of course finding our way through the remains of the station, and finding clues. Such as personal logs both audio and on computer stations. All of this of course pales to the fact that we have to figure out a way to get back to earth safely. Because we also know that Earth base thinks everyone’s dead. Because we cannot contact them. We can hear the radio calls, but we cannot send an answer.

The adventure taking place in space and orbit around the earth, takes place in Zero Gravity which gives the physics code of the game a chance to really shine. There is nothing like the terror and desperate frustration of trying to reach for a floating oxygen bottle, only to miss it and instead hit it. Thus watching it spin off away from you. 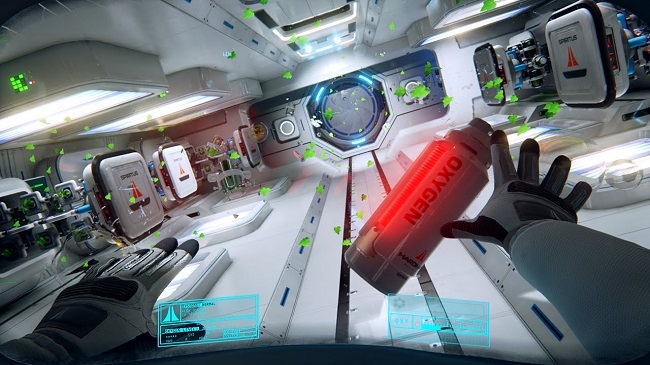 The game play and controls are great with a game pad. The Microsoft controller that you would use with an Xbox One works just perfect on this PC version of ADR1FT and controlling the character never felt difficult at all. Goals like grabbing objects or anchor points in the game or moving up to and using a computer terminal all felt very smooth. Transitioning between objects you interact with and moving away from them always felt very natural and just fit with the environment you are in.

Menu screens are pretty straight forward and the game even gives you a chance to go into what it calls EVA Training, just so a player can get the hang of Zero-G movement and the controls. It really does not matter if you think you are ready just jumping into the game cold or not… I would suggest doing the EVA Training section to really get a feel for it. After all you are playing as a character that is used to the Zero Gravity environment. 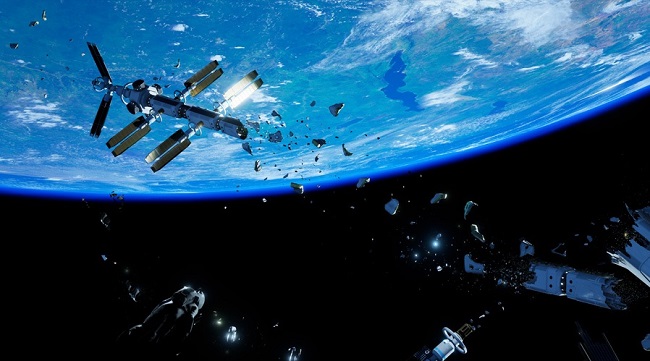 On that note, you have your basic forward backwards and since you are in space, up and down and rotation as well. The game does a good job of making you feel like you’re playing this astronaut and how the suite works. Feeling out of control? Not a problem, there is also a button sequence that stabilizes you, so it becomes easier to re orient yourself. This comes in handy when the world seemingly has no real up or down in some areas of the game.

Sound in the game is another stellar thing. Radio calls from Earth just sound, right for lack of better terms. You feel like these are real radio transmissions coming in to you. So the subtle sounds are also very solid. The muted thump as you collide with anything very solid and unyielding just sounds right. The sound work and music all work in concert to make it a great experience, though music does get repetitive after a time, it still sets the mood very well.

I would say the oddest thing is the character never talks in this game. even after communications are re-established. Or maybe I just missed something and only text could be sent.

The best music is almost the kind of stuff that just sort of makes itself a natural part of the story and events that are taking place in a game. You almost don’t even know it’s there. The emotional impact the music has on you in the game is very real. After a while you do tend to notice it more in the game, but it does not detract from the experience. 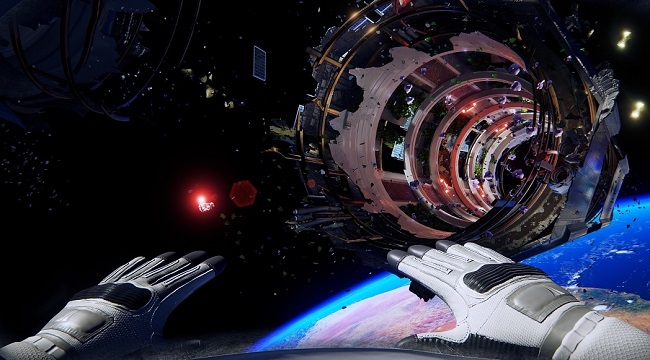 ADR1FT achieves an impressive gaming experience all without aliens, monsters or guns blazing. It’s just you and the environment of space… and trying to survive and escape back to Earth. While a bit on the short side it is still an enjoyable game.

Needless to say, the full sense of being there is mind blowing, if you sit back enough while playing you get the full effect of BEING IN the space suit in a very inhospitable environment.  That feeling is further aided by the fact that you are seeing things from the inside of a space helmet. It is truly a spectacular effect that the game pulls off and it’s the closest a majority of us will ever get to being an astronaut.

However the feeling is rather jarring sometimes and horrifyingly beautiful in some of its visuals. One of the problems that may arise with some players is the feeling of vertigo or virtual sickness/motion sickness. The brain and the other senses are just not agreeing with what your eyes are visually seeing. 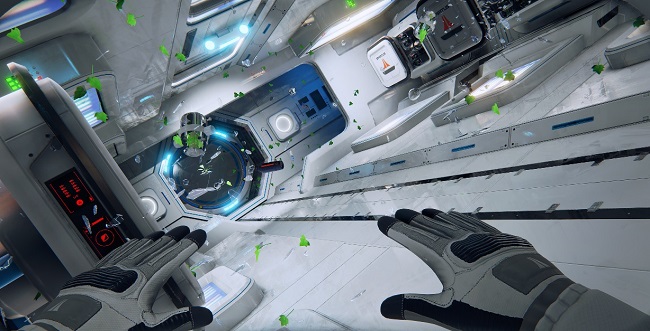 This does not make it a bad game at all. It just means that play wise you may have to take it in small chunks, especially if you are affected. The developers have come up with a way to assist in the motion sickness to help orient the player and maybe relieve some of the uneasiness that may wash over the player during a gaming session. With a push and hold of a button the field of view focuses down to an oval shape directly in front of the player. This does in fact help with the sick feelings of motion sickness. Though I did continue to feel the effects hours after a long playing session. 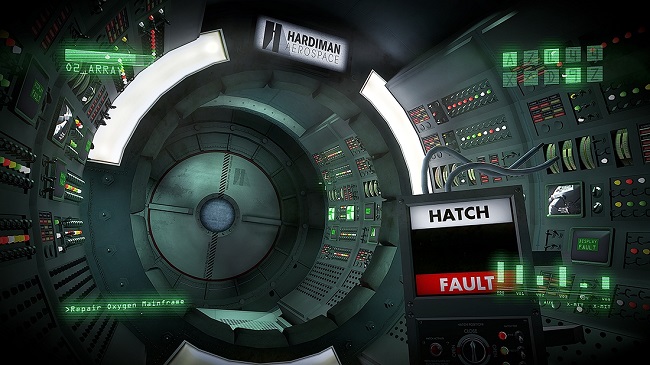 The measure I feel for a great VR game is, how well does it use the Virtual Reality experience? Also, would I want to play it even without Virtual reality? I would have to say yes. ADR1FT has enough going for it that I would play it in a regular game mode, without the Virtual Reality. There is a mystery, there is survival, there are dangers, and there are some puzzles to figure out. It gives enough of a challenge to keep us playing.

Other Virtual Reality games should take note as ADR1FT is not just a throw away game for the sake of showing off some cool VR gaming. It’s the real deal. Giving players a really mind enveloping gaming experience of the dangers of working and traveling in outer space. Some may say the limited environment of space gives the player very little of nothing much to do. That is not the point of the game, the developers set out with a vision and brought it to light. ADR1FT is well worth the time to play it and while not a lot of replay ability here, it is still a game that delivers.