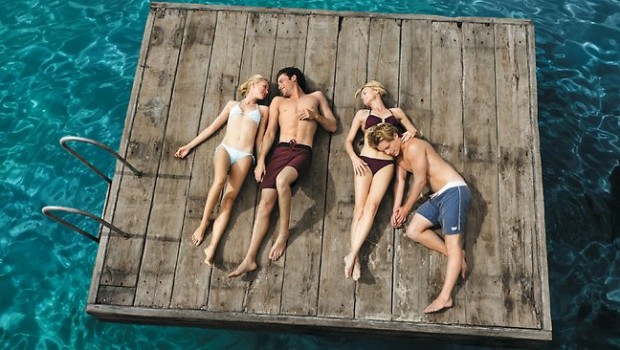 The characters in Adoration (previously called Adore and Two Mothers at various film festivals), belong in their own isolated little world that is self-absorbed, irresponsible and one that I had little interest visiting. French director Anne Fontaine (Coco Before Chanel) and British screenwriter Christopher Hampton (Atonement) come to the conclusion that some people are afraid of growing old and would prefer to spend their days with those who are much younger. They abandon their social responsibilities and families, so they can play together at the beach. This is a film that seems divorced from any moral sensibilities. In the film’s production notes it says that the unjudging hand of its filmmaker was deliberate. This film needed serious judgment: someone to rewrite the underwritten draft of the script and to have a firmer opinion on these terribly unappealing characters.

Christopher Hampton’s script, adapting from Doris Lessing’s novel The Grandmothers, lacks plausible psychology and context for the film’s two female characters and their love circle. Naomi Watts plays Lil, who is recently widowed because her husband died in a car accident. She lives by the beach, next door to her childhood friend Roz (Robin Wright), and they lazily watch their two sons Ian (Xavier Samuel) and Tom (Animal Kingdom’s James Frecheville) catch the waves. Roz’s husband is Harold (Ben Mendelsohn), who is concerned that she spends more time with her best friend than with him. He wants her to move with him to the city because he’s accepted a job as a teacher. The two boys have few prospects besides surfing, so Harold encourages Tom to become involved with a stage play.

The only distinguishable traits of Lil and Roz are that they are two Peter Pan figures, living an impossibly sheltered inner life. Roz works at an art gallery (rarely seen) and Lil’s inner life involves a yacht company, where she is pursued by Saul (Gary Sweet), who she finds boring. The film’s romance isn’t between the two women, they assure us they aren’t lesbians, but between themselves and each other’s sons. They romance the two boys because they’re both resisting adult lives. They reject future prospects with two older, more stable men because they want to remain young and free (shallow). What is sympathetic or attractive about that? It’s not that this is creepy, though some might think so, but that the relationship grows increasingly unrealistic, selfish and short-sighted. It fails to make you understand the mental attraction, particularly from the boy’s side, besides the physicality and the casualness of it, as one of the women describes it. Why would these young, funky surfer dudes be interested in sharing their intimate social lives with their mothers?

One of the other fatal narrative choices made by Hampton is that after initiating the romance, the film decides to fast forward two years into the future. This dilutes potential conflict and reactions to the relationships from the older characters like Harold. Fast forwarding also reveals the limitations of the story’s driving motor. The original source material is composed of four short stories and like a lot of films attempting to expand limited material it feels overstretched as a full length feature. The love circle aside, there are actually very few risks taken with the dramatic beats of the story. They seem predictable to everyone except the leads. Tom starts spending time with Mary (Jessica Tovey), a girl from the play he’s working on. This makes Lil feel old and worried he’s not interested in her anymore. Why does it surprise her that a young man would find someone closer to his own age? The awkward time shift also means that a pivotal side character, Sophie Lowe’s Hannah, is belatedly introduced and is underwritten, with no backstory or personal geography. 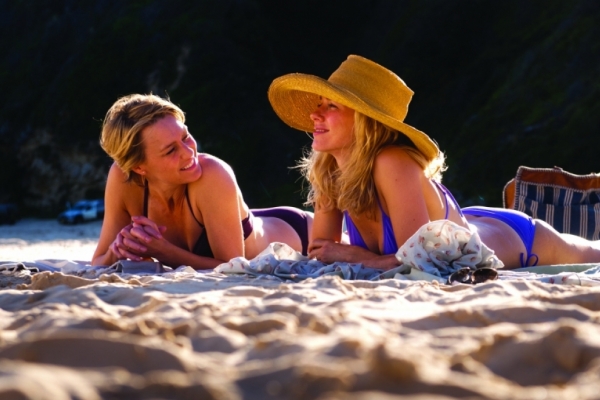 The performances from some normally reliable talents do little to strengthen our sympathy and help us understand the characters. Naomi Watts and Robin Wright smoke, giggle and drink a lot but also come across as a pair of juvenile airhead teenagers. Is this intentional? Both Xavier Samuel and James Frecheville are given terribly uninteresting and inexpressive roles, spending most of the film surfing and being underserviced by flat dialogue. “I love her”, says Ian with laughable, deadening seriousness after his first encounter with Roz. Behind the camera, Fontaine’s only stylistic choices are the attractive wide framing of a consistently deserted beach, and contrasting these shots with a tighter lens in the household. This is an obvious contrast between the freedom of the beach and the adult life. The film is interminably long, poorly paced, and concludes with an ending that is frustratingly detached from comprehensible human behaviour and personal responsibility. What exactly do these characters plan to do when the tide is low or bluntly, when they’re too old to be running around a beach together?

Summary: The film is interminably long, poorly paced, and concludes with an ending that is frustratingly detached from comprehensible human behaviour.