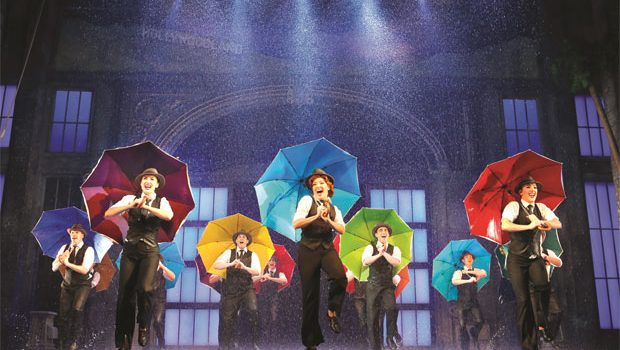 Adam Garcia has today announced that unfortunately, due to ongoing issues relating to the injury he suffered whilst performing on stage, he has had to withdraw from the remainder of the Australian tour of SINGIN’ IN THE RAIN.

‘The word disappointed does not begin to convey how I’m feeling with having to step away from this dream role and the fantastic cast and crew I was having so much fun with. The injury sustained has proven to be more extensive and complicated than initially diagnosed. The length of the recovery time and the risk of recurrence has made it impossible for me to continue in the production. I wish my fellow cast members all the best with the remainder of the tour as they truly are a most talented and hard working group of people which I have had the pleasure of calling my colleagues’ said Adam Garcia.

‘We are very grateful for Adam’s contribution to this production and we are truly sorry to see him have to withdraw from the show and wish him all the best with his recuperation. We are so thankful to have accomplished performers Grant Almirall and Rohan Browne who will continue sharing the role of Don Lockwood in Sydney together with the extraordinary company giving audiences an amazing experience each and every performance. Plans for the role for the Brisbane, Adelaide and Perth seasons will be confirmed shortly’, said the Producers.

As has been the case so far in Sydney, sharing the role of Don Lockwood are talented actors Grant Almirall and Rohan Browne. Grant has starred in many international productions around the world, and has performed the lead role of Don Lockwood in Singin’ in the Rain over the past 18 months on its international tour to South Africa, New Zealand and Hong Kong, to popular and critical acclaim. Rohan has enjoyed an extensive and successful career having starring roles in countless productions including Melbourne Theatre Company’s The Drowsy Chaperone, West Side Story, A Chorus Line, The Production Company’s Nice Work If You Can Get It, amongst others. Rohan also originated the role of Ken Railings in Strictly Ballroom the Musical and more recently was a featured artist alongside Hugh Jackman for his Broadway To Oz concert tour.

The splash-hit West End stage production SINGIN’ IN THE RAIN is currently playing at Sydney Lyric until September before seasons in Brisbane, Adelaide and Perth. This extraordinary production stars Jack Chambers as Cosmo Brown, Gretel Scarlett as Kathy Selden and Erika Heynatz as Lina Lamont. SINGIN’ IN THE RAIN also stars Robyn Arthur, Rodney Dobson and Mike Bishop alongside an incredible supporting cast of 20 of Australia’s brightest musical theatre performers.

★★★★★ “Even the rain can’t stop this bountiful tap-dancing beauty from glowing brightly in the streets. This latest production is a brilliant and vibrant explosion of bliss, laughter and formidable tap skills” Time Out

★★★★½ “Superb adaptation of arguably the most iconic movie musical of all time. Every second is packed with bright, buoyant, whip-smart energy…the principal cast are solid gold, a trio who are almost flawless” Limelight

Produced in Australia by Lunchbox Theatrical Productions, Michael Cassel Group, David Atkins Enterprises and TEG Dainty, the popular musical is thrilling audiences as they experience high-octane choreography, sumptuous sets and costumes and the exhilarating spectacle of rain live on stage!

With the help of 12,000 litres of recycled water, the audience can enjoy one of the most famous dance scenes live on stage, with some leaving the theatre a little wetter than when they arrived!

SINGIN’ IN THE RAIN playing at Sydney Lyric until September before seasons in Brisbane, Adelaide and Perth.