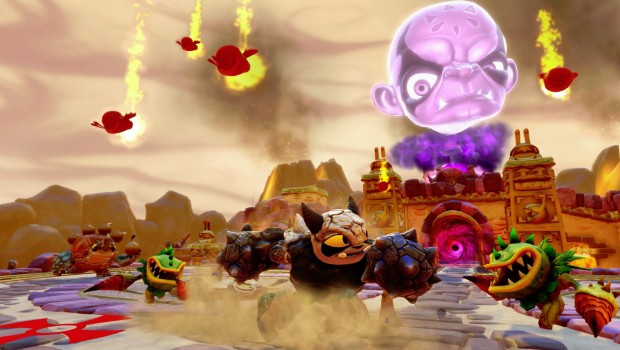 Can You Believe Those Skylanders Losers Actually Caved In to My Demands?

SYDNEY, Australia – SEPTEMBER 16, 2014 – Attention foolish human fools! Activision Publishing, Inc., a wholly owned subsidiary of Activision Blizzard, Inc. (NASDAQ: ATVI), is officially announcing an all new diabolical gameplay mode in honour of me, Emperor Kaos, the most infamously evil villain in all of Skylands!  In my glorious “Kaos Doom Challenge,” snivelling Portal Masters like you can feebly battle through increasingly difficult waves of my personal minions using your ridiculous army of Skylanders.

And since you obviously won’t stand a chance, I, Kaos, will graciously allow you to build defensive towers and battle my fearsome allies using any of your Skylanders from your entire collection. However, when you bumbling Portal Masters utterly fail to progress past my hoards of evil underlings, the “Mystery Box of Doom” will be opened – which will then incomprehensibly spit out gigantic villains that will completely destroy you! And because I am both benevolent and merciful, I will even let you fools use any of your pitiful Trapped Villains to fight them.

And for those of you who absolutely cannot wait for your horribly inevitable destruction, the Skylanders Trap Team Starter Pack will be available on October 2nd in Australia on the following exceptionally awesome platforms: Nintendo’s Wii™ system and Nintendo’s Wii U™ system, a variety of iPad®, Kindle Fire and Android tablets; Xbox One and Xbox 360 games and entertainment systems from Microsoft; PlayStation®4 system; PlayStation®3 system. A different, unique adventure also will be available on the Nintendo 3DS™ hand-held system.

Now if you’ll excuse me, I have a world to conquer.  I look forward to crushing your spirits. With loathing and disgust.