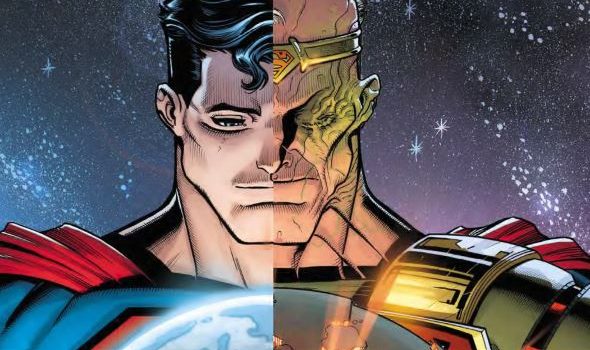 Summary: Action Comics #989 is all about who watches the El's and what will be his end game?

As the countdown to Action Comics #1000 continues, the mysterious story of a corrupted Jor-El as Mr Oz continues as Clark is still unsure of who this person really is. “Jor-El” is still persistent that humanity will destroy itself much to the disgust of Clark. Meanwhile at the Daily Planet, a crazed terrorist who has strapped explosives on his body threatens to destroy this iconic building and everyone in it. As Superman is alerted to another threat, we also learn that Jor-El is hiding something as this puppeteer continues with his plan as his agents do his dirty work.

So before the terrorist can achieve his end goal, Jor-El “saves” the day as his son is busy elsewhere. It is also here where we learn that Jor El planned this attack on the Daily Planet in order to get closer to his grandson Jon and more particularly, brainwash him towards his own nefarious plans. Jor-El also shows Jon a better place than Earth and a place where no one has to hide and can be themselves which the son of Clark and Lois finds very tempting.

Although not on the same level as the previous issue, Dan Jurgens still delivers a compelling read and drops far more clues about this mysterious Jor-El. If Earth is corrupted, this Jor-El is a complicated cesspool of corruption and if he is the puppetmaster, I’m really eager to learn who his master or masters are. The story is also beautifully pencilled by Viktor Bogdanovic who not only draws a majestic Superman but successfully brings the words of Jurgens to wife in a true blockbuster fashion with some spectacular panels.