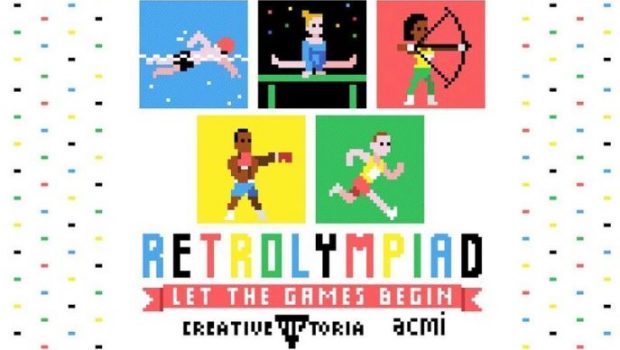 To celebrate the 2016 Olympic games in Rio de Janeiro, ACMI presents RETROLYMPIAD, an evening of food, drinks and Olympics inspired retro videogames from the 80s through to the 2000 Sydney Olympics. For one-night only on Saturday 23 July, RETROLYMPIAD transforms ACMI’s ‘Lightwell’ and ‘Cube’ spaces into a pop-up arcade playground for adults.

A highlight of the night will be a live DJ Set by the Midnight Juggernauts who will spin 80s inspired beats.

“RETROLYMPIAD is a new breed of late night,” said ACMI Producer Emily Siddons. “Whether you have fond memories of mashing controllers to crunchy 8-bit graphics, or are a game expert, this event has you covered. It is about getting into the Olympic spirit, hanging out with friends, being entertained by live game play and epic sporting fails over music, laughs and great food and drinks.”

Just like Carl Lewis made history in track and field, so too could Melburnians make history as top scoring players of Konami’s genre defining Track and Field (U.S). They might even win a medal or ten like Carl did.

Whether you’re a competitor or a spectator, RETROLYMPIAD is one pixel pusher party you don’t want to miss.

The Midnight Juggernauts as a creative collective have been active since the late 1960s give or take a few decades.  From Russia to Colombia and China to Turkey – they’ve performed across the globe including at major festivals including Glastonbury, Exit, Coachella, Fuji Rock, and more.  When not releasing galactical musical concoctions, they are hosting parties and events from Tokyo to New York.

Andy Matthews and Al Tremblay Birchall are stand-up comedians and writers who have collaborated together in sketch group Stupid Old Man, most recently writing and starring in six part sketch series, Australia, Get It Up Ya! (2015). Between them they have written and performed for shows such as The Project, Shaun Micallef’s Mad As Hell, The Chaser’s Media Circus, The Checkout and Dirty Laundry Live.