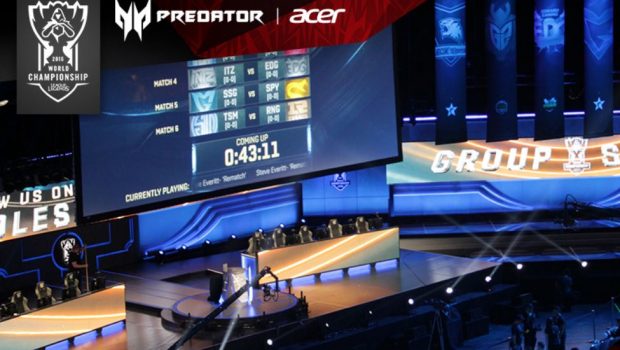 Acer’s Innovative, Award-Winning Predator Gaming Monitors will Display All of the Action at Top International Esports Events in 2016

Sydney, Australia. (Oct. 4, 2016) Acer (TWSE: 2353, LSE: ACID) has been named an official Sponsor for the 2016 League of Legends World Championships and 2016 All Star Event, with the partnership with LoL esports kicking off now and continuing through the duration of these events. Assisted by CAA in setting up the partnership, Acer will supply Predator XB1 (XB241H) monitors for these exciting global esports events, equipping the professional practice rooms and stages, displaying all of the action during matches. The marketing partnership also includes branding integration during Worlds and ASE broadcasts, and unique experience opportunities will also be offered to avid gamers.

“Acer is committed to pushing boundaries in the gaming arena and has built a strong reputation with its widely acclaimed Predator line of gaming notebooks, desktops and displays, consistently delivering new, relevant technology to the market,” said Vincent Lin, senior director, Global Product Marketing and Planning at Acer. “This sponsorship for the 2016 League of Legends World Championships and 2016 League of Legends All-Star Event, two of the world’s most popular and exciting esports events, will help Acer demonstrate its gaming prowess to gaming enthusiasts around the globe. The Predator XB1 monitors will give professional players an immersive experience that will enable them to push their skills to the limit and delight their esports fans.”

“We’re thrilled to welcome Acer to the game as a partner as we get ready to celebrate the competitive pinnacle of 2016 and crown a new World Champion,” said Jarred Kennedy, Riot Games.

The Acer Predator line has earned countless industry awards and accolades for giving a competitive edge to gamers. The Acer Predator XB241H sports a brilliant 24-inch Full HD 1080p display featuring NVIDIA G-Sync, a quick 1ms response and up to a fast 144Hz refresh rate rendering fast-moving actions and dramatic transitions without smearing or ghosting. For enthusiasts and professionals who like to push gaming to the outer limits, the Predator XB241H can be overclocked up to 180Hz. It also provides wide viewing angles with accurate colors up to 170 degrees horizontally and 160 degrees vertically, so no targets are missed.

Featuring GameView, the Acer Predator XB241H lets gamers quickly and easily toggle between three customisable profiles to tweak settings in-game without the need to navigate an OSD menu, a significant benefit when every second counts. Other settings include the ability to adjust black levels to ensure every threat is seen, aim-point assistance to get a lead on opponents and perfect the shot, and the ability to select the on-screen refresh rate. Acer EyeProtect leveraging flicker-less, blue-light filter, ComfyView and low-dimming technologies prevents glare and allows the user to reduce blue light emissions, which may help decrease eye fatigue during long gaming matches. VESA wall mountable, the Predator XB241H maximizes desk space and the stand can be adjusted up to 5.9 inches and tilted from -5 to 35 degrees for more comfortable viewing. Powerful connectivity is enabled via HDMI and DisplayPort.

The 2016 League of Legends World Championship, or Worlds, is an international esports tournament that takes place over five weeks of competitive play. The top 16 teams from around the world who have conquered their regional leagues come together to compete on the international stage; teams from North America, Europe, Korea, China, Taiwan and other regions will compete for a prize pool of more than $2 million (USD). Worlds kicks off on Sept. 29 and the finals will take place on Oct. 29 in Los Angeles.

League of Legends All Stars Brings Fans in on the Fun