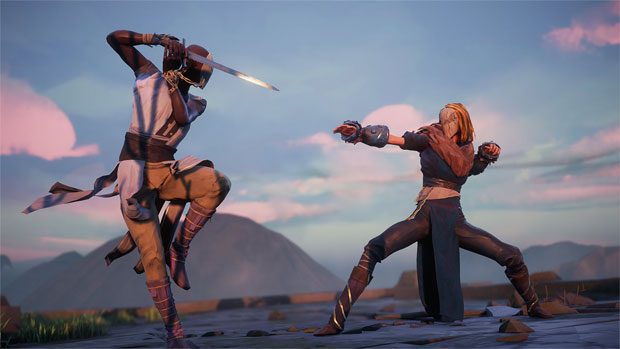 PARIS – Independent developer Sloclap and the punch drunk fighters of Devolver Digital have released a major update to Absolver (1.06) that delivers six striking new masks based on other Devolver Digital hit games alongside notable fixes to the online experience on PC and PlayStation 4.

Both Prospects and Absolvers can reenter the world of Adal to discover six new crossover masks hidden in the game’s central Guidance Bridge. These masks were each inspired by a different Devolver Digital title including Hotline Miami, Enter the Gungeon, Mother Russia Bleeds, The Talos Principle, Shadow Warrior 2, and the upcoming RUINER.

The update also delivers the results of Sloclap’s tireless efforts to correct launch week frustrations experienced by some players after the developer worked closely with the community to identify and remedy issues with players on PC and PlayStation. The fixes include updates to online connection stability, server relays in specific territories, save file corruptions and several other tweaks to smooth out reproducible bugs reported by the Absolver community.

Absolver launched on August 29 for PC and PlayStation 4, going on to become Devolver Digital’s largest game launch to date with over 250,000 units sold across all platforms. Sloclap and Devolver Digital plan to continue to address any technical issues reported by the community while delivering a steady stream of new gameplay modes, features, and additions to Absolver’s deep Combat Deck. For more information on Absolver visit absolver.com and follow @Absolver on Twitter.