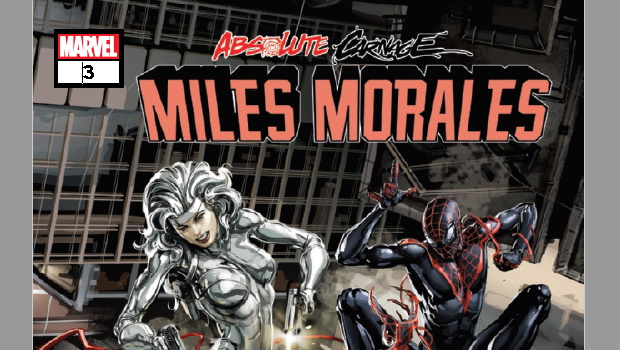 Summary: Wrestling with yourself when you are not yourself... not a great way to start the day, but for Miles, it's just part of the job.

You’re going to need a running start for this one because it hits the ground… running! I’ll let the comic bring you up to speed “While trying to protect a man with a codex from an army of Ravencroft inmates under Carnage’s control, Spider-man was overwhelmed. Now part of the red family, Miles was dispatched with another man under Carnage’s power, the murderer Happy Dan, to kill J. Jonah Jameson.” That’s just the introduction! Take a deep breath because you won’t have time to breathe with all the action going on in this issue!

How do you fit so much activity into so few pages? Somehow Saladin Ahmed has managed to cram a huge amount of story into this portion of the larger arc… Miles fighting to escape Carnage’s clutches, J. Jonah Jameson… being… well J. Jonah Jameson. Silver Sable trying to do her job, despite the aforementioned Mr Jameson. A bit of sneaker promotion work, acknowledgement of property damage and a daring decision that just might be the only option at the end… as I said, there’s a lot crammed in here.

I think it would be fair to say this comic is defined by movement… there is barely a panel in which things are still for any sense of time. Federico Vicentini must have been just as kinetic as the artwork that has been committed to these pages when bringing them to life. The action, the sense of movement is all inescapable! You can’t help feel the energy of all the movement contained within the pages.

With a bold open and a send off that poses the old notion of trying to choose the lesser of two evils… there’s a lot to take in here. If you like your comics with energy and pace… this is going to be right up, down and around your alley. If you like a slower pace and gentle story telling, this definitely won’t be for you. Keep your heart rate monitor nearby and grab a copy for a seated workout!