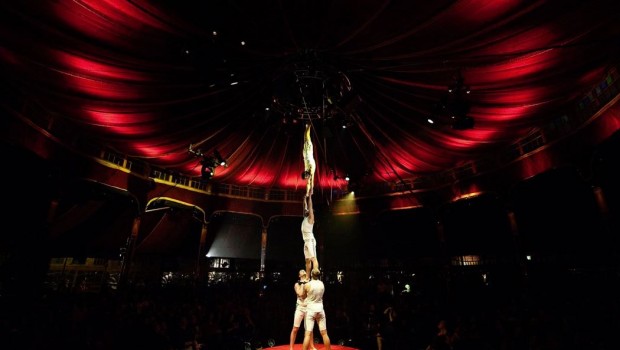 The thriving Las Vegas residency of ABSINTHE commenced in 2011, playing on the forecourt of Caesars Palace following several summer seasons in Spiegelworld’s iconic spiegeltent in New York City. Now in its fourth sold-out year, the production has been hailed as “the most inventive and daring show to open on the strip in years!” (Las Vegas Sun), and was announced the “Best Show in Vegas” by Vegas Seven Magazine. Celebrity audience members over the past year alone have included James Franco, Olivia Newton-John, Neil Patrick Harris, Brad Garrett and Pamela Anderson.

ABSINTHE will be presented in a 700-seat antique spiegeltent, furnished with beveled mirrors, plush velvet seating booths and a well stocked bar. Audience members will get up close and personal as the artists present their jaw-dropping acts on the most intimate stage in town.

The Australian tour of ABSINTHE will feature several of the outstanding acts currently featured in the Las Vegas production with some additional new surprises.

“ABSINTHE is now considered a must see for visitors to Las Vegas. I am thrilled to be bringing our biggest ever hit production home before we head off to tour the rest of the world.”

Nine Live CEO Geoff Jones said, “We are absolutely delighted to be bringing another world class show from the team at Spiegelworld to Australia next year. Straight off a hugely successful run on the Las Vegas strip, I have no doubt that Australian audiences are going to fall head over heels for this spectacular, one-of-a-kind show.”

The seventeen-month Australian tour of EMPIRE by Spiegelworld was a phenomenal success, playing to over 200,000 people including by-demand return seasons in Sydney and Melbourne. EMPIRE has just completed a sold out tour of Japan and is about to tour New Zealand.

Tickets for ABSINTHE in Newcastle, Melbourne, Brisbane, Perth and Sydney on sale from midday on Wednesday October 15 2014!

For information on the ABSINTHE Australian tour please visit www.absintheaustralia.com

*VIP Ringside Tickets are available and include a seat in the front 2 rows, priority entry and a complimentary beverage.

**transaction fees and charges may apply

Group Bookings are available to groups of 6 or more. Contact the Ticketek Group Bookings Department on 1300 364 001 or email groupbookings@ticketek.com.au

Show duration: 90 minutes with no interval

Absinthe is recommended for ages 15 and above. The performance features some nudity and strong language.