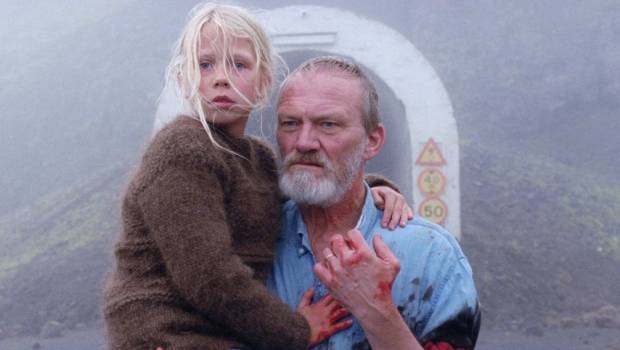 The second feature film from Icelandic visual artist turned filmmaker Hlynur Pálmason subverts the Nordic noir genre and achieves emotional and artistic success. For the past decade, the genre has flourished by juxtaposing wintry landscapes and small, banal communities with grizzled crime drama and strong police procedural content. The height of the genre has included a plethora of high-quality television shows, such as The Killing (2007). It has also transitioned into mainstream culture with adaptations of Stieg Larsson’s Millennium novels from Sweden and David Fincher’s solid Hollywood remake. Now A White, White Day is another fine Scandinavian piece.

Despite traditional genre tropes, such as death, infidelity, and police work, Pálmason successfully deters from creating a straight crime procedural. Instead, his incredible eye for images creates a mosaic of fractured humanity. He argues men are incomplete and fail to overcome a heavy heart if they are left without a proper emotional outlet. The film’s potent combination of visual finesse and deep humanity counters the banality of day-to-day village life and climaxes with a powerful physical and psychological struggle. The film’s thesis draws from an unsourced quote that opens the story by stating: ‘when everything is white, and you can no longer see the difference between the earth and the sky, the dead can talk to us who are still living’.

The voices of the dead are imbedded in the grief that burdens people when they fail to articulate themselves. The idea commences in the prologue, which dramatises the proximity of the living and the dead. The striking opening image is a long winding road smothered by an impenetrable white fog. The camera pursues a car as it drives deep towards the haze only for the vehicle to skid off the road and tumble down the side of a cliff. The deceased driver (Sara Dögg Ásgeirsdóttir) is the wife of Ingimundur (Ingvar Sigurdsson), a burly policeman. To counter his grief, Ingimundur builds a house for his daughter, Elín (Elma Stefania Agustsdottir), and granddaughter, Salka (Ída Mekkín Hlynsdóttir).

He has a loving relationship with Salka who he happily drives around the community and takes fishing. She shields him from several problematic relationships in his life. He is unmoved by his psychologist who asks difficult questions and his brother’s company proves unsatisfying. Ingimundur has also stood down from his job but his working relationships with his colleagues remain solid. However, when he discovers his wife was having an affair, he uses his investigative skills to survey the man who threatened his relationship.

Every scene is imbued with a complex binary highlighting the inseparability of life and death. Ingimundur’s failure to understand death leaves him with an emotional void where he is unable to express his anger to others. Without his wife and the structure of his job, he feels lifeless. His one emotional release is building a house for his family, but it resembles a long, ongoing project. A point-of-view shot through a circular window suggests it merely contains his depression. Meanwhile, he mistakenly believes Salka is too young to understand death.

She is smarter than some realise and appeals to Ingimundur because she differs from the adults who are shallow or unable to express themselves. In one humorous moment, she plays a Robert Schumann piece and comments on the composer’s private life. Ingimundur also detaches from Elín who struggles to comprehend their loss. When she kisses him goodbye, he tells her, ‘that’s enough’. He then hears her reflecting on her mother by saying, ‘she made me, now she’s not here anymore’. Her disbelief reminds him of his own failure to understand the tragedy.

A conversation between Ingimundur and his brother also leaves him unsatisfied and without a suitable emotional outlet. His brother reveals he had an affair because he could not imagine sleeping with one person his whole life. Regarding his wife, Ingimundur states ‘I never needed anything else’. The contrast in their attitudes quietly leaves them at odds. Similarly, Ingimundur’s doctor asks difficult questions that further agitate him.

In this sequence, Ingimundur’s dialogue comprises of short staccato sentences that characterise his deflective nature. When asked if he knows who he is, he replies, ‘I am a man’. The line foreshadows Pálmason’s dramatic thesis that to understand themselves and death, men require outlets where they can grieve and express their pain.

Pálmason’s unique visual choices further illustrate Ingimundur’s failure to understand death and his lack of self-expression. In the opening, the camera pursues the wife’s car before it descends. The fluidity of the tracking shot and the speed of the car express the immediacy of death as the vehicle veers towards the white fog. The fog ominously reflects the ambiguity about whether it was an accident or suicide. Meanwhile, the way the deep white haze swarms the background infers our failure to understand death beyond its immediacy.

The opening’s cold, grizzly milieu persistently underlines the story’s dense psychology. For example, the muted colour tones, such as the grey concrete and glass panels of the house, subtly infer Ingimundur’s emotional stasis and repression. The house itself is first photographed in a lengthy time-lapse montage. The weather constantly changes so that a mountain’s visibility is consumed by the fog while construction continues. The sequence’s duration reflects Ingimundur’s persistence but also the prolonged loneliness of an unfinished home.

Deliberate framing is also employed to visualise Ingimundur’s sense of incompleteness. As he becomes aware of his wife’s infidelity, he grows increasingly aggressive during his soccer games. When he showers after a match, he is filmed in a mid-shot. Despite the hulking physicality of his upper body, framing him as half a man purposely suggests his incompleteness and depression because he is unable to articulate his grief and anger to others. The height of his trauma is signposted by the camera following a stone falling from a cliff all the way down to the bottom of a river. The unique visual sequence is then followed by sporadic bursts of violence.

Pálmason further argues that understanding death is a meaningful rite of passage for children and adults. After Ingimundur and Salka undertake a fishing trip, his colleagues notice that a fish Salka has caught is still alive. They tell her to bash it against the table. The camera hard cuts to the inside of the bag where we see the fish. The immediacy of the shot suggests Salka does not realise the proximity of life and death.

Learning death pursues us like an unseen fog is a significant passage of emotional maturity. In an unforgettable scene, Ingimundur tells Salka a gruesome bedtime story. The tense scene is filmed in a single take. As he tells the story, the camera slowly pushes in on Ingimundur’s shoulder and tightens the frame. The gentle push of the camera contrasts the hard cut to the fish. It visualises how Salka is beginning to understand life and death’s inseparability. A similar effect is achieved while watching a bizarre children’s programme.

It is morbidly funny when the show’s host screams that he is not ready for death and then looks at the camera and says, ‘you at home will all die!’ In this scene, the camera edges towards the television set in a single motion. The unbroken take creates a subjective viewpoint shot, highlighting Salka’s concentration on the host’s words. It suggests that at a young age she is beginning to understand death’s inevitability. Further, the eerie music score used in several scenes employs piercing string instruments. The unsettling notes foreshadow death hovering above us whether we ourselves die or witness violence and near-death experiences.

The story’s emotional heft is attributable to the two lead performances. As Ingimundur, Ingvar Sigurdsson’s stern, minimalist performance is magnetic and perfectly attuned to the idea of someone incapable of self-expression for fear that it will dilute his masculinity. While physically imposing, he remains likeable because of the love he shares for Salka. The longstanding repression of his emotions serves to make his belated aggravation affecting. In one tough moment he unexpectedly berates Salka, which makes her cry. The excellent naturalistic work of twelve-year-old actress Ída Mekkín Hlynsdóttir makes these moments affecting.

The visual prowess and the performances overcome some dips in the film’s pacing around the midpoint. The design of the content, specifically the emphasis on everyday activity, leads one to ask where the story is heading. However, it proves integral to Pálmason’s subversion of Nordic noir where he juxtaposes everyday life with heightened emotions of anger, jealousy, and revenge. Instead of succumbing to the conventions of the subgenre, Palmason’s filmic choices craft a deep psychological outlook.

Theme and image skilfully combine to dramatise the proximity of life and death for children and adults and the difficulty of finding emotional outlets for one’s struggles. The film is engaging because of the original approach to grief and depression and the powerful humanity supplied by the two lead actors. It is proof that Pálmason himself is an artistic and personal filmmaker quickly rising in stature.