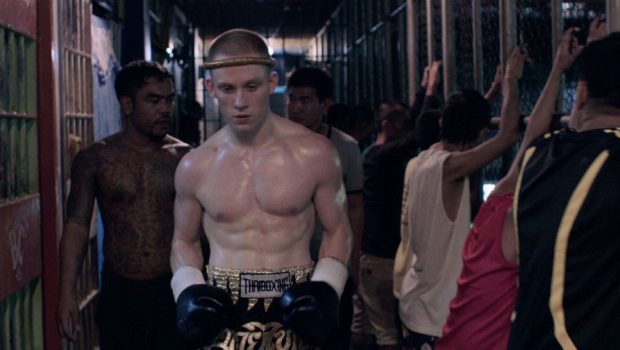 A Prayer Before Dawn – Film Review

A Prayer Before Dawn is a powerful sensory experience rather than a story about deeply cemented relationships. The technical components employed by French director Jean-Stéphane Sauvaire potently enhance its sense of place and its realism. It was shot in Thailand in the now-closed Nakhon Pathom prison. The extras are mostly former inmates and ex-boxers. All of them are covered in tattoos and are the types of heavies most would cross the street to avoid. To further authenticate the experience, one sequence was filmed in an active prison and included over three-thousand real prisoners.

It’s a cold, terrifying passage into a hellscape where one wouldn’t dare to look sideways. Sauvaire has said that he does not think the film is particularly violent and that Hollywood films are comparatively more violent: ‘I’d say this is more realistic, and certainly a more realistic form of violence. And I think that’s what strikes people’, he said. While he is right about its realism, there are also many types of violence besides blood and gore. The oppressiveness of the environment and the intimidation factor are forms of violence, but they are artfully designed to build stylistic and thematic patterns.

Prayer’s intent is to portray prison life as a claustrophobic war zone, directly viewed from the perspective of its subject, real-life British boxer Billy Moore. The camera regularly tracks behind Billy’s back and focuses on his face in a tight close-up. When Billy must evacuate from his cell and is summoned to the courtyard, an unbroken tracking shot paces behind him, and a siren wails on the soundtrack. We become fully immersed into what he sees and hears, particularly the claustrophobic spaces that are shot in natural lighting and grey, muted colours.

The film’s spaces overflow with an avalanche of colliding male bodies. Men are filmed either pounding each other in the boxing ring or they are forced to sleep side by side in the horribly overcrowded cells. In one terrifying sequence, Billy is almost crushed under the weight of a group of attacking men. They force a young man over to the corner where Billy is asleep and then proceed to rape him. In another scene, the camera crabs sideways, speeding past each prisoner as they call out during a roll call. As part of the repressive sound design, the men constantly yell in their native dialect without subtitles. 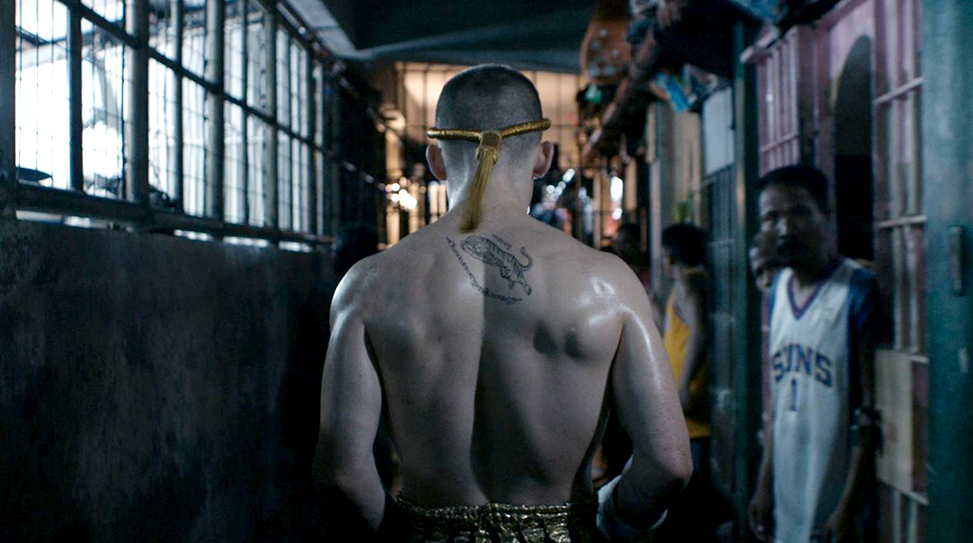 The stylistic choices that define Sauvaire’s audio-vision are purposeful. By filming the men in rows and lines, Prayer adopts a visual symmetry that transcends the ugliness of its setting. The blocking and compositions reflect the cultural disconnection between Billy’s pale skin and freckles and the Thai prisoners. Similarly, the mash of tattooed bodies shows the psychological trauma of an outsider being swarmed by an oppressive and dominant culture. By having the men yell in their native tongue without subtitles, it amplifies Billy’s isolation as a White man in a foreign world. In contrast, there is a great wide shot of several Thai prisoners sitting outside, which shows their solidarity.

Billy’s does not speak for the first half of the film. The effect of the minimalist dialogue is twofold. It further stresses his repression in a foreign environment, and emphasises the film’s reliance on pure cinema, images instead of dialogue, to create meaning. One of the few memorable lines of dialogue is from a guard. Following a death in a cell, where someone hangs themselves, he addresses the disharmony amongst the prisoners. ‘Prison is a place for men not for dogs!’ he says, chastising them for fighting with each other. This underlines the cultural disconnect the film looks to resolve. 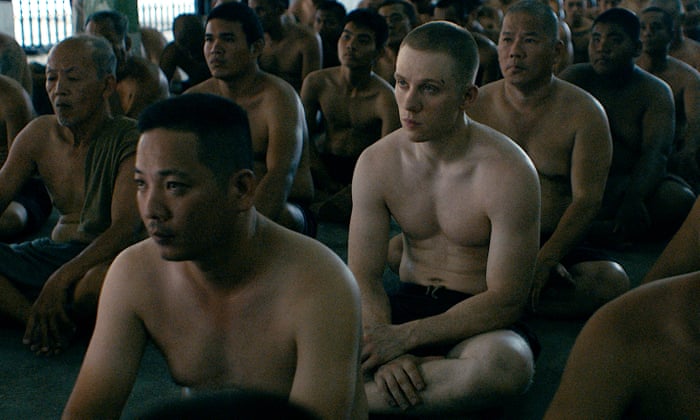 Prayer’s exploration of boxing leads to mending some of the cultural disharmony. Billy (played by Peaky Blinders’ star Joe Cole) is a heroin addict and a boxer who is arrested after assaulting a referee during a match. He tries hiding his drugs before being captured. In prison, he continues taking drugs and remains violent to the other prisoners and guards. Some of the guards manage to sneak him some contraband. Life looks grim for Billy until he sees the prison boxing team, which he seeks to join. They practice Muay Thai, which is different to regular boxing. It allows for kicks and elbows to be used.

During some of the fight scenes, the frame becomes so tight that Billy and his opponent are indistinguishable from one another. It is as though their humanity has been dissolved by the violence. Meanwhile, Billy is also aided by Fame (Pornchanok Mabklang), a transgender inmate who provides him with cigarettes to trade. She also starts a physical relationship with him too. Billy concedes to her that he does have a family, but he has not spoken to them in a long time. Through this subplot, the colliding male bodies, and the prevalence of prison rape, the film reveals an underlining degree of homoeroticism.

One of the challenges for Sauvaire and screenwriter Jonathan Hirschbein is deciding how to create an entire film from the verisimilitude of the sound and images. The social disconnect of the early scenes is addressed as Billy becomes a stronger boxer. He becomes trained in Muay Thai and learns new fighting techniques from his inmates. The plot predictably rests on the climax of a major tournament fight where Billy carries a serious injury. Through its story beats, Prayer begins to resemble a movie and forgoes some of the realistic, documentary-like qualities of the early scenes.

While the story’s beats seem overly faithful to the boxing genre, Billy’s unpredictability, and the unlikelihood of him pulling himself together, holds our attention. The tension of the plot is sustained by his relapses into drugs and violence. When he beats up a man, he is filmed behind a chicken-wire fence as though he is a prisoner of his own choices. Though one surprise decision in the denouement suggests he is capable of change but in a quiet manner. As for Billy’s family conflict, its resolution is implied rather than dramatised through a clever final image. It doesn’t elaborate on the fractured relationship but frees the film from any unnecessary sentimentality.

Although its imagery is authentic, liberties have been taken in retelling Billy’s story. A family member did not visit him in prison, nor did he have a relationship with a transgender person. The real Billy was regularly incarcerated before and after this prison stint. One website says he has spent fifteen years in twenty-two different prisons. Calling this a redemption story is misleading. It’s a contained survival story that asks whether a man can use sport as a form of personal rehabilitation. Additionally, Joe Cole is not as physically imposing as the real Billy, but his minimalist acting excels in showing the mental deterioration of a man losing control of his body to terrible choices before regaining his composure.

Prayer is a brutal and uncompromising dramatisation of prison life and the social disconnect found between men of different cultures. It is commendable for creating a powerful vision of hell and addiction, the artistry of which transcends the ugliness of its subject matter. As a boxing story, it is involving too because we remain uncertain about whether Billy will make the right choices in his life. It is true that once Prayer becomes more plot-driven, it takes some liberties and doesn’t forge many deeply personal relationships. However, as an immersive audio-visual experience, it’s a rather extraordinary technical feat in creating style and meaning from even the most confronting images.

Summary: As an immersive audio-visual experience, it’s a rather extraordinary technical feat in creating style and meaning from even the most confronting images.