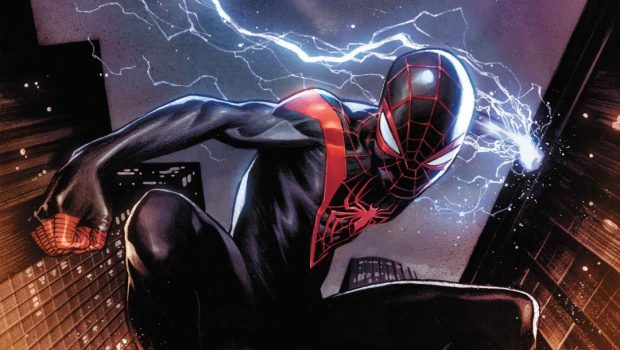 Kicking off in December, MILES MORALES: SPIDER-MAN’s new series will be defined by a dangerous new foe… In this highly-anticipated new run, writer Cody Ziglar and newly christened Marvel’s Stormbreaker artist Federico Vicentini don’t plan to pull any punches when it comes to putting Miles through the ringer and the hero’s biggest defeat will come at the hands of RABBLE. The tech-genius will use an army of drones and deadly never-before-seen gadgetry to upgrade Miles’ rogues gallery like never before. Relentlessly seeking to settle a long-brewing personal agenda against Miles, the mysterious villain is set to destroy every aspect of Miles’ life from his friends to his family. And that’s only step one of her plan… What’s at the root her deep hatred of Spider-Man?

“It’s fantastic to work on this new character,” Vicentini said. “I was given total freedom of creation. Based on Cody’s description and on his notes, I had a clear idea of how I wanted to portray the armor; it had to be something rough, but resistant and ingenious at the same time. And thanks also to the drones, Rabble’s gonna rock! Brace yourself, Miles!”

For years she’s schemed in the shadows…now Rabble is finally ready to unleash an assault on everything and everyone Miles Morales loves. Don’t miss the first strike in the battle that’s going to shatter Spidey’s Super Hero career when MILES MORALES: SPIDER-MAN begins in December. For more information, visit Marvel.com.