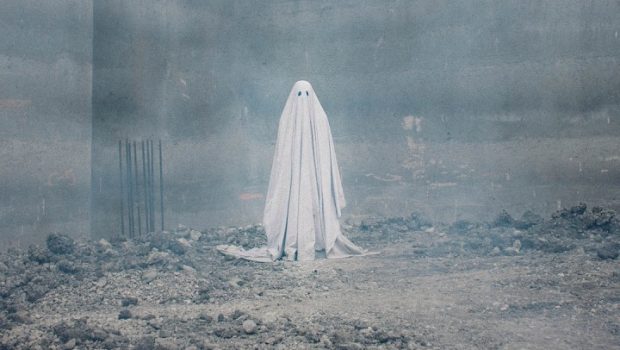 The title A Ghost Story provides connotations of a spooky movie with conventional horror scares. While the film is undeniably tense and unsettling at times, it is completely different to the recent haunted house movies of James Wan’s filmography for example. The movie opens with a quote from Virgina Woolf’s short story “A Haunted House”: “Whatever hour you woke, there was a door shutting.” In the context of this film, the door shutting may refer to the inevitability of death in everyday life. Ironically, death is only perpetual because we are alive to see people fade before us.

While not a religious film about the afterlife, A Ghost Story argues there might be a space between life and death, where love keeps a metaphysical being from relinquishing something valuable in their former life. The film uses this viewpoint to look at time, arguing that until an otherworldly being has accepted fate, they will be caught in the same cycle of time that has determined their existence, thereby preventing them from moving forward. A living person, bound by linear time, has no choice but to see out their life, and consequently leave grief behind.

If it wasn’t already apparent from these complex ruminations, this film is an experimental arthouse project rather than a conventional horror film. Its peculiarity stems from two facets: its unique story beats and the deliberate, occasionally self-consciousness, employment of shot selections to explore its story and characters. It purposely leaves us as spectators waiting and lingering, which is also representative of the dilemmas facing its two characters, who are played by Rooney Mara and Casey Affleck.

The film’s director David Lowery is himself compiling an interesting and varied oeuvre, including the dreary drama Ain’t Them Bodies Saints (2013), which also starred Mara and Affleck, and the Disney remake Pete’s Dragon (2016). He is also developing a new version of Peter Pan. Perhaps his commercial projects, children’s films, are the reason why he’s been permitted to make a highly unique movie with two mega stars—one of whom is an Oscar winner hidden under a sheet!

A Ghost Story is shaped by Lowery’s formal choices, specifically how the characters and its story are framed as opposed to hard definitions of characterisation and plotting. Describing the film’s narrative with a conventional synopsis doesn’t do justice to its unique form. It starts simply with a couple named “C” and “M” preparing to move out of their home. “M” (Mara) is keen to move but “C” (Affleck) feels he has history with the house and is reluctant to leave.

One morning “C” is killed in a car accident, leaving “M” to identify the body in the morgue and to continue with her life alone. After she leaves, “C” awakens in the morgue as a voiceless and invisible ghost who is now wrapped in a sheet with two eyeholes, like a child’s Halloween costume. For the rest of the film, he merely watches “M” live out her life. Only other ghosts can communicate with him, which leads to a few quietly funny subtitles shared between them.

The specifics of how this film is photographed fleshes out the story and characters. The early scenes for example are shot in a home video ratio, which is a unique stylistic choice that reflects the characters’ lives as a stored archive of the past—a significant choice considering the cyclical nature of time and some late developments that won’t be spoiled. Other formal choices offer clear visual grammar for separating the living and the dead, such as the simple image of the white sheet floating along the green lawn, which shapes the conflict of the two binaries with clarity.

Another example of the purposeful visual design is the use of extended shot duration. In an unbroken long shot of the house, no cuts, “M” draws an object all the way from her front-door to the lawn, thereby highlighting her unflinching desire to leave the home. Contrastingly, after “C” dies the contained spaces of the house perpetually show his ghost always in the back of the frame behind “M”, which stresses the narrative’s thematic core in one image: his unbreakable emotional attachment to his partner.

The length of the shot duration is unnerving because it leaves us in anticipation and the refusal to cut shows the psychological stasis of the two characters, who are stubborn to accept their fate. One sequence, where “M” is photographed for an eternity eating a chocolate pie, is one of the few times where the unbroken shot feels self-conscious; the static camera overly signposts her emotional crisis when its unnecessary to hold for this long to recognise the image’s meaning. 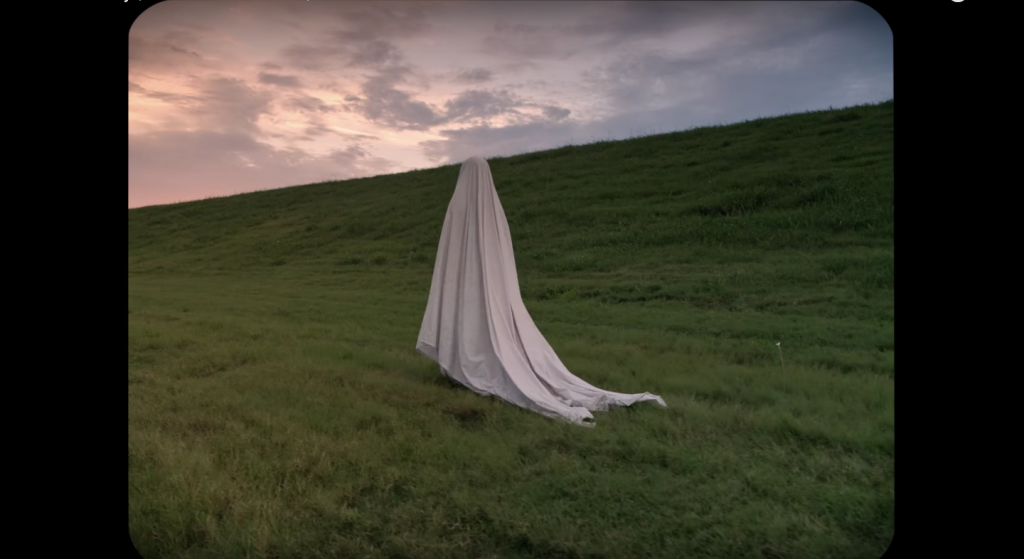 Fortunately, the film recovers because of the momentum of its unique story beats, and because it persists with its visual system rather than using dialogue to dramatise these moments. The film stops lingering over its artistic style and instead builds personal conflicts, such as “C’s” ghost watching “M” as she starts dating again, and a Hispanic family moving inside the house. In the latter scenario, conventional scares, such as objects being smashed, are employed but unlike conventional horror films, we understand the actions of the ghost archetype first. Having “C’s” ghost linger while other characters move on is a clear and simple way of showing a contrast in attitudes and beliefs.

The film commences a major visual and philosophical shift, beginning with an energetic monologue at a party. In the film’s most dialogue-heavy sequence, a man announces that art will be the only thing to survive as the world folds in on itself and takes shape again. Making him unaware of “C’s” ghost reflects his failure to understand the individual, and the volume of dialogue here in an otherwise quiet, dialogue-free movie is suggestive of the film’s belief that words are less significant and meaningful than actions.

The changes in time and location that follow the party, signposted by an early galactic image, show how “C’s” love for his wife transcends linear time. The shifts are thematically consistent with his early lingering and contradict the party man’s viewpoint that only art will be remembered, not people. 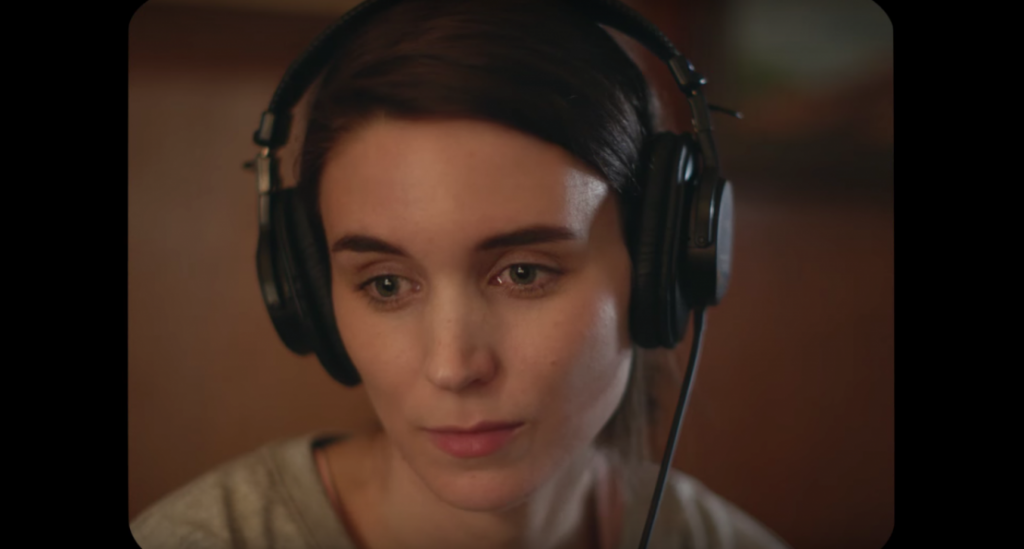 Similarly, the image of “M” bobbing her head to a music track in a close-up shot reflects that she’s remembering her partner, not merely his work. This means that art cannot exist without a creator, someone who has enabled us to listen to a piece of music or to view a painting. Perhaps more philosophically, people are in the film’s eye the creators or artists of life, where one cannot move onto a new chapter if a previous one wasn’t created by someone else. Through his death, “C” has indirectly shaped the trajectory of “M’s” new life, potentially with someone else.

A Ghost Story is a unique and often bewildering movie that’s not always easy to watch. It takes huge risks, particularly with its formal compositions, and as expected not all of them pay off. Sometimes the shot duration feels overstated, compensating for how little dialogue and characterisation the film contains. There are also times when we want to ask more from the film’s two actors because without dialogue, and only the formal properties to access their character, they can only provide icy minimalistic stares to reflect their loneliness.

Regardless, there is much skill and craft on display because the film confidently builds an image system to create meaning almost singularly through its visuals. Refreshingly, it is a film of big ideas and questions rather than one built around formulas for cheap scares, which is an important distinction to consider before seeing it.

Summary: It is a film of big ideas and questions rather than one built around formulas for cheap scares, which is an important distinction to consider before seeing it.