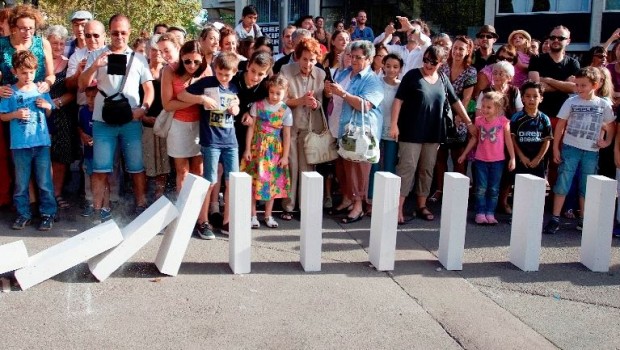 In an Australian first, a 2km chain of more than 7000 giant dominoes will snake through the city and bring Melbourne to a stand-still.

On Saturday 6 February Arts Centre Melbourne’s Dominoes arts project will see thousands of concrete breezeblocks winding along paths and laneways, through buildings, squares and promenades linking the city’s diverse communities in a symbolic as well as physical chain of cause and effect.

The interactive spectacle is Arts Centre Melbourne’s third project in the Betty Amsden Participation Program and the work of internationally renowned UK performance company, Station House Opera. An Australian premiere, the Melbourne event is the first time Dominoes has been presented outside of Europe after “falls” in more than 10 European cities including Copenhagen, Marseille, Helsinki and Ljubljana.