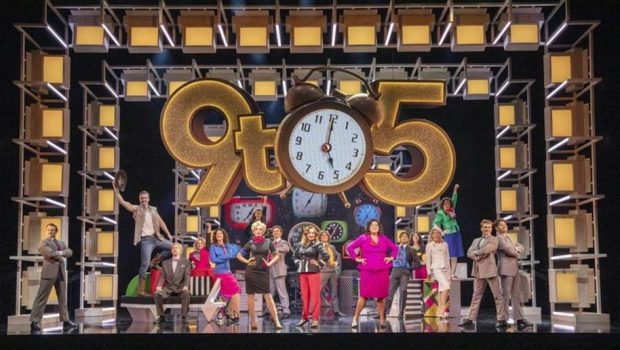 9 TO 5 THE MUSICAL ARRIVES IN MELBOURNE IN SIX WEEKS!

Dolly Parton’s smash-hit West End musical, 9 TO 5 THE MUSICAL, has proven to be a winner in Sydney and Brisbane with both audiences and critics, and will open in Melbourne on July 10. New tickets for performances at State Theatre, Arts Centre Melbourne, go on sale this Friday 3 June, with pre-sales from today.

“Double the fun of the film and what a cast!” – Sydney Morning Herald

“The finest escapism you could hope for” – Australian Financial Review

“The best musical to hit Australia ever” – Dave Hughes, 2DAY-FM

The producers have assembled a top line cast to inhabit these iconic and much loved roles. Marina Prior plays Violet Newstead, a smart, sassy and efficient woman who has worked all her life at Consolidated Industries. She has all it takes to run the company but there is one small issue … her boss! Casey Donovan is Judy Bernly, a newly separated, never worked before young woman who finds more than just a job at Consolidated Industries. Erin Clare plays Doralee Rhodes, a ‘don’t mess with me’ well-brought-up, bright and beautiful country gal. She may look like a push over but is anything but! Caroline O’Connor is busy-body Roz Keith, the administration assistant who is fiercely – and unrequitedly – in love with her boss, while Eddie Perfect plays the controlling boss Franklin Hart Jnr.

The stellar cast have been lauded with critical acclaim. Marina Prior is described as “Pitch perfect” by The Australian, and Limelight said she “Exudes sassy, no-nonsense efficiency and anchors the show with effortless ease.” The Plus Ones said Casey Donovan gave “A tour-de-force in musical theatre”, while Theatre Thoughts said ”If 9 to 5 is gold carat fun, Casey Donovan shines in 24 carat gold.” The Australian called Erin Clare “Luminous” with Limelight saying she is “Loveable, gorgeous and captures Parton’s country tones beautifully.” Time Out said, “Caroline O’Connor, one of Australia’s true stage greats, offers a masterclass in character comedy” and “Eddie Perfect is, well, perfect”.

A sensation on the West End and inspired by the hit film, the musical tells the story of Doralee, Violet and Judy, three enterprising workmates pushed to the edge by their mean-spirited boss Franklin Hart Jnr. Resorting to wit, comradery and cunning, they dream up a no holds barred scheme to kidnap and turn the tables on their controlling supervisor in the most hilariously defiant of ways. The only question is, will the feisty trio manage to change the office culture to reach their full potential – or will events unravel when the CEO pays an unexpected visit?

With a sparkling score by Dolly Parton and a book by the iconic movie’s original screenwriter Patricia Resnick, 9 TO 5 is the quintessential feel-good show for the times. Full of mischief, laughter and affection, it’s gold carat fun!

Set the alarm for a great night out at Dolly Parton’s joyous smash-hit musical 9 TO 5, featuring knock-out songs and high-flying ambitions.

Sofitel Melbourne on Collins is the official hotel partner of 9 TO 5 in Melbourne.  For those wanting to add an overnight experience to their trip to the theatre visit sofitel-melbourne.com.au

The Australian Government is supporting 9 TO 5 through its $200 million Restart Investment to Sustain and Expand (RISE) Fund, a program that is providing financial assistance to arts and entertainment companies affected by COVID-19.

9 TO 5 is subject to a major event declaration under the Major Events Act 2009. It is an offence for a 9 TO 5 ticket to be sold, or offered or advertised for resale, at a price exceeding its face-value purchase price by more than 10%, unless the seller is authorised in writing by the ticketed event organiser. Breaches can result in heavy fines. For more information, please vic.gov.au/ticketscalping