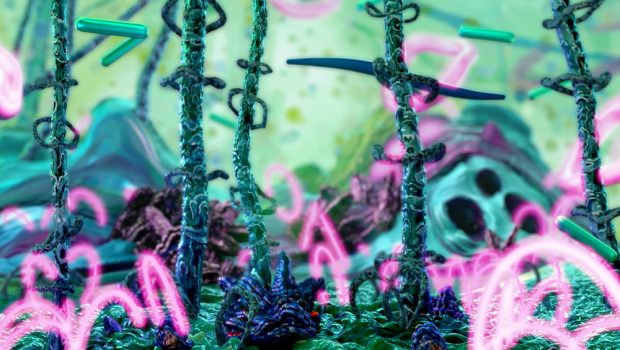 SYDNEY, 20 July 2017 – From Friday 21 to Sunday 30 July, Gertrude Street in Melbourne’s suburb of Fitzroy will burst with visual art and culture courtesy of the artists behind the Gertrude Street Projection Festival (GSPF). The festival, now in its tenth year is being supported by Epson whose projectors are used in many of the key installations.

Epson’s flagship 25,000 lumens laser projector, the EB-L25000UNL, is being used at the Gertrude Hotel by artist Ash Coates in his work entitled Mycolinguistics (Rubico-Sterolosis or Oneness). There’s also two 12,000 lumens EB-L1505UNL projectors being used at the festival, one by Ian de Gruchy at Turning Point for Futures Past and the second by Peter Waples-Crowe with Megan Evans at Turnley’s Roller Door for their work Settlers and Savages.

Other Epson projectors used at the festival include an EB-L1300UNL by Amanda Morgan at the Builder’s Arms for If they build a wall, we can scale it, the EB-G7905UNL by Glynn Urquhart at Johnstons Façade for Future Flesh Forms and the EB-G7500UNL by Rose Staff at El Lobo for Reflective INK.

There are also Epson EB-2265U, EB-1460Ui and EB-G7400UNL projectors used at other installations – a total of eleven – across the entire festival.

For a complete list of installations go to: http://gspf.com.au/program/

The Festival Hub at Catfish will also present 10 nights of live music as well as Little Woods & Seventh Galleries showcasing a contemporary spin on the projection art medium.

2017 GSPF Curator Fiona Hillary said, “We are delighted that Epson is such an integral part and key supporter of the 10th Anniversary of the Gertrude Street Projection Festival as we see it as an invitation to artists to create glimpses for and of the future. For ten days over winter, imagine Gertrude Street as a time capsule that explores the social, political and environmental epoch of our times. Drawing on the past and grounded in the present while projecting into the future the GSPF 2017 invites artists to contribute to an immersive, interactive and enchanting experience that ignites our collective social imaginary to explore the possibilities of multiple futures…there are no limits as we unfurl the future.”