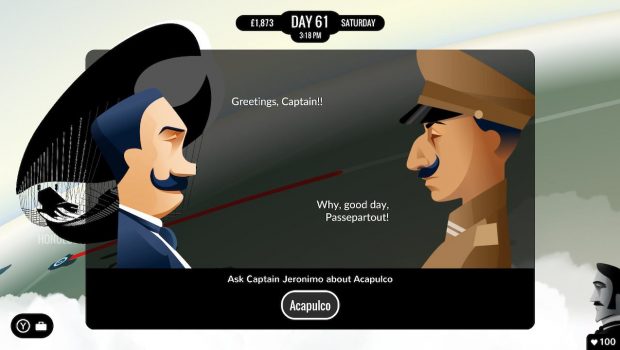 Summary: An entertaining on the go text-based adventure

Jules Vernes Around the World in 80 Days is a novel that eagerly lends itself to the format of video games, so when developer Inkle turned to the adventure for their ‘choose your own adventure’ text game, 80 Days, it was a natural fit. You play as reluctant navigator Passepartout, manservant to Phileas Fogg, a wealthy individual who has placed a hefty bet on being able to circumnavigate the world in 80 days or less. Our modern mind says, no big deal, I can fly from Perth to London in sixteen hours, getting around the world in less than 80 days should be easy. 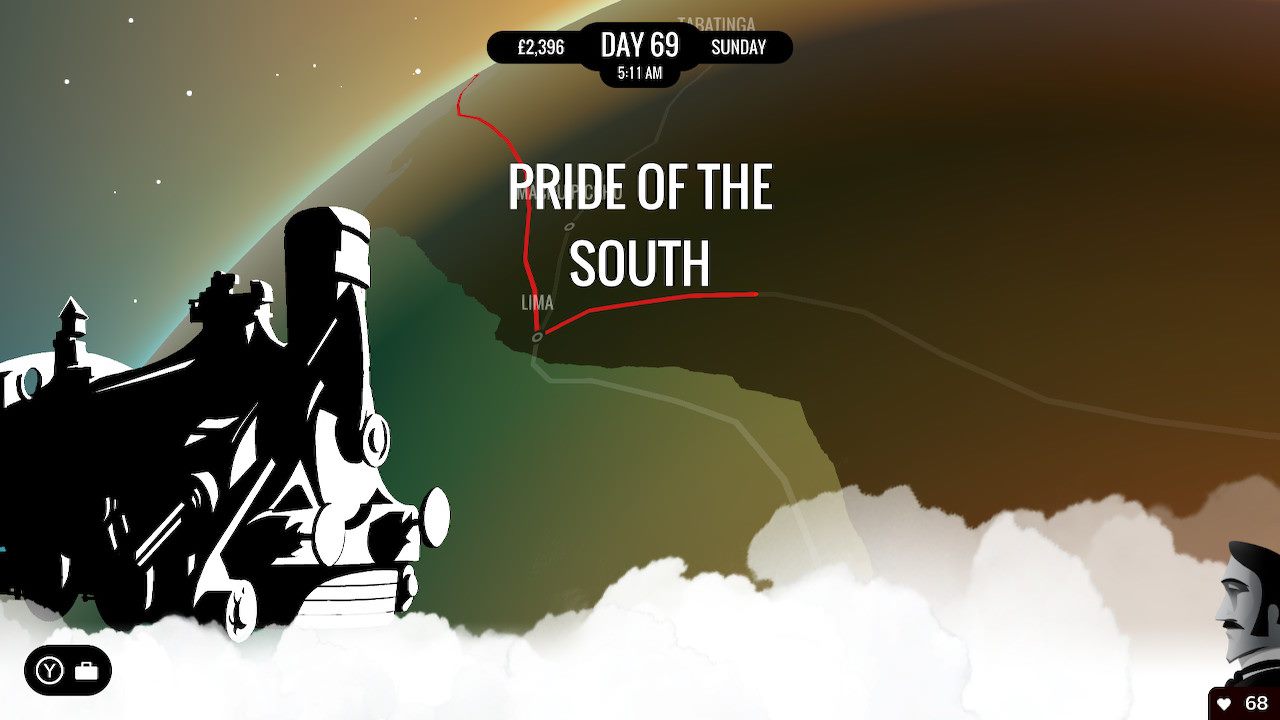 As this is a steampunk-esque story, the growing presence of automatons causes a heightened level of fear. On top of this, the feeling that war could break out at any time is everywhere, contradicting the luxurious challenge that Fogg has thrown down to his contemporaries. And what a challenge that is! Sure, with a modern mentality we think that it’s no big deal and nice and easy to just hop on a plane and a day later you’re on the other side of the world, but in the age of innovation, this wasn’t so easy. But, the year is 1872, not 2019, and no matter how much steampunk sheen is applied to this narrative, it’s not going to be easy securing a path across a changing world.

Your ‘play space’ is a globe of the world, and as such, you can plot out your path long before you even set off, but if you’re like me, that plan will be thrown out completely when you arrive at a new city. More on that in a bit.

Story progression is made by intuitive dialogue choices that equally inform about the city you’re currently in, as well as elucidate what kind of character your version of Passepartout is going to be. As you continue on with your journey, you’ll need to manage finances by negotiating cheaper travel tickets, and by purchasing goods that you can on sell for a greater value in oncoming cities. But, you’re a manservant first of all, and as such, you’ll need to ensure that Phileas Fogg is satisfied with your service and kept in good health. He’s a finnicky codger who will frown upon your choice to talk to the lower class, but will easily be satiated with a hot tea. 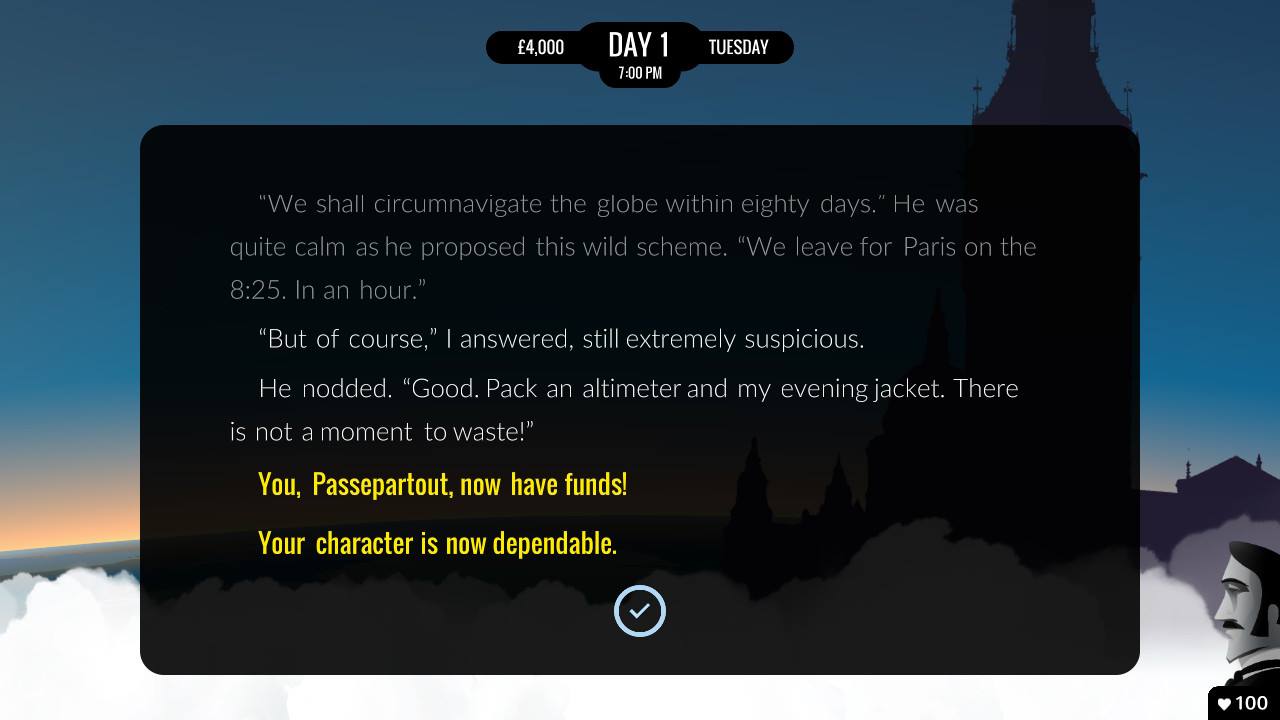 There’s a curious glimpse into class and diversity, with the fact that Passepartout is a servant to a man of wealth, he essentially has feet in two worlds. I’m equally dispensable, but desperately important and vital for Fogg’s success. With that said, if there’s an initial complaint about 80 Days, it’s that it’s hard to predict exactly how your wealthy leader Phileas will react to your actions. In one city, he’ll be happy that you spoke to the townsfolk, and then, in the next city he’ll be grumpy that you opted to find out about the culture of the town. So, I’d iron his clothes at the next city, and suddenly our relationship had improved. There’s a morality system at play within 80 Days that always seems in flux, meaning that I never fully comprehended whether my actions would have a positive outcome or not.

That’s a minor quibble though, especially when it comes to the in-the-moment gameplay which is joyous and entertaining. Writers Meg Jayanth and Jon Ingold have crafted a deep, fascinating world to explore, and with 750,000 words of textual content to explore, you’re barely even going to scrape the surface of what’s on offer in one playthrough alone. 80 Days encourages extended replays to find new, quicker, easier, or cheaper paths around the world.

My first playthrough was just over three hours long. I plotted out a path across Russia, thinking that the Trans-Siberian railway would cut a speedy path across the top of the world, leading me to Canada and beyond, but instead of easy navigation, I found a country wrought with a simmering military presence that was openly antagonistic to my English heritage. I discovered a world brimming with fear of the impending automaton revolution that was about to transform the future.

My first version of Passepartout was a lothario, attempting to woo any woman who he met. And yet, because of the always-moving journey, he was never in town long enough for a romance to flourish. While you want to reach home as quick as possible, the people that you meet along the way fill your journey with fascinating tales, causing you to want to linger in towns longer than you should, causing a further drain on your ever-dwindling bank account. Given the wealth of possible stops on your journey, you can’t help but plot a path in your mind for future playthroughs.

As you travel, you can purchase trinkets and goods at each stop. The cities that they’re most valuable in are noted, quietly influencing which path you might take. I purchased a bunch of soon-to-be-valuable items in Europe, with the hope of making thousands when I reached San Francisco. But, the unpredictable nature of travel rears its head as we were diverted mid journey due to a storm, and instead, we ended up in Honolulu, out of money, and despised for the failed mutiny that I tried to instigate. The costly items that I’d lugged halfway around the world suddenly became useless and pointless. 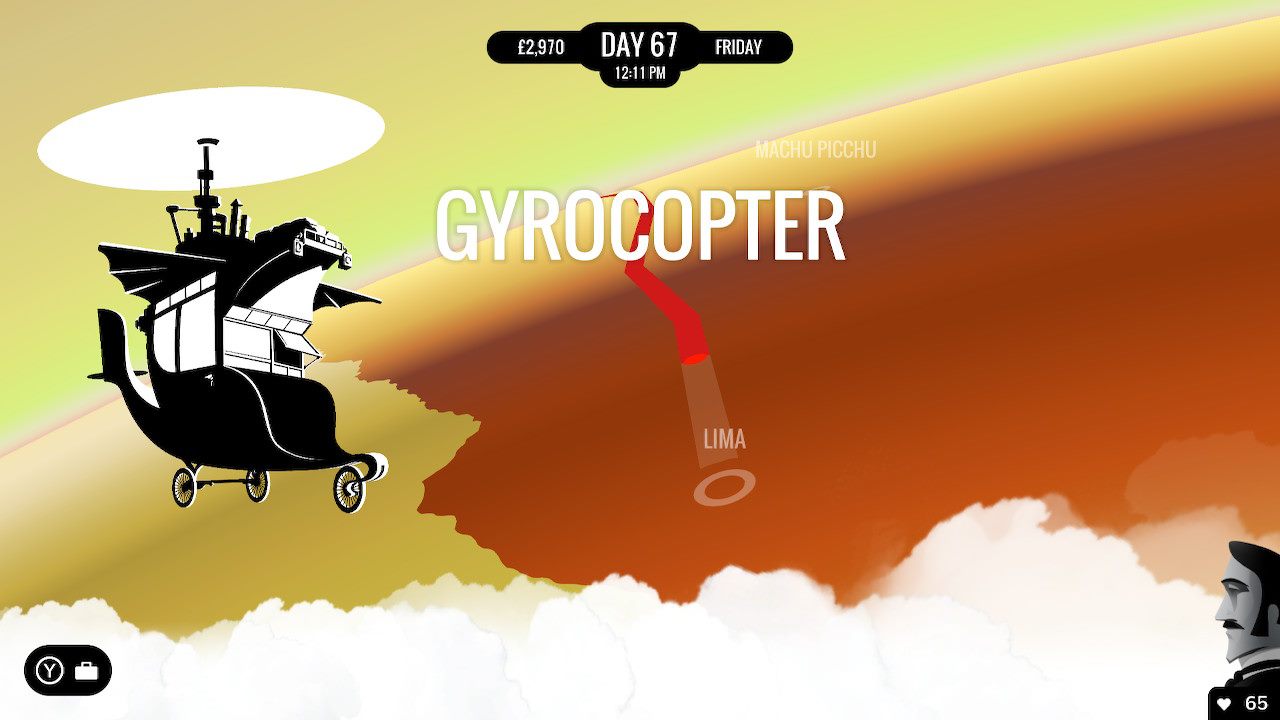 With the basic gameplay, and the visually pleasing (albeit unexciting) children’s book style of animation, and a lacklustre soundtrack, the entertainment and joy of 80 Days comes from the narrative. This joy is amplified by the great risk/reward decisions that you have to make at each town. You’re never sure whether it’ll pay off, but that’s part of the charm. My first playthrough had me only just getting back to London in time, scraping by with barely a dollar to my name. I was victorious, but I knew I could do better next time round.

80 Days was released on Android and iOS platforms in 2014, and then PC in 2015, but this new release on the Nintendo Switch feels just right. I didn’t play the previous versions, but in handheld mode on the Switch, with haptic feedback in the controllers responding to each decision you make, I found myself lost in this wonderfully vibrant world. You’d do well to add this to your ‘on the go’ library. 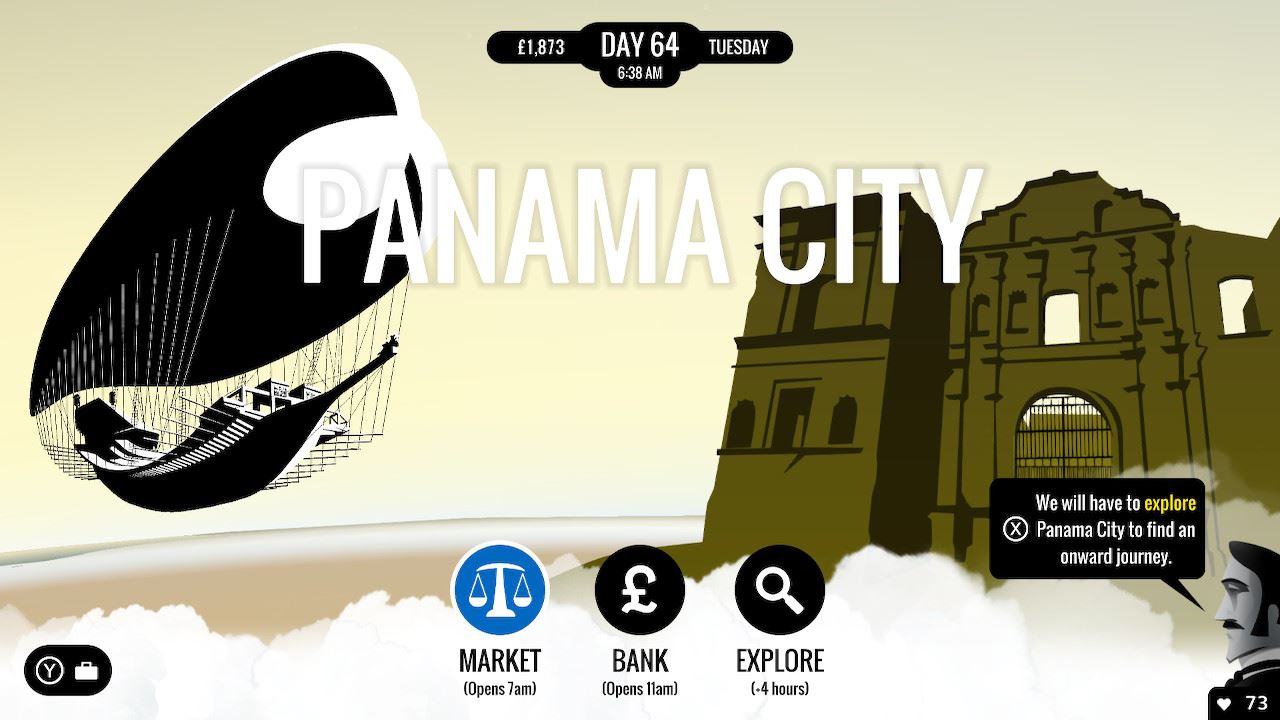 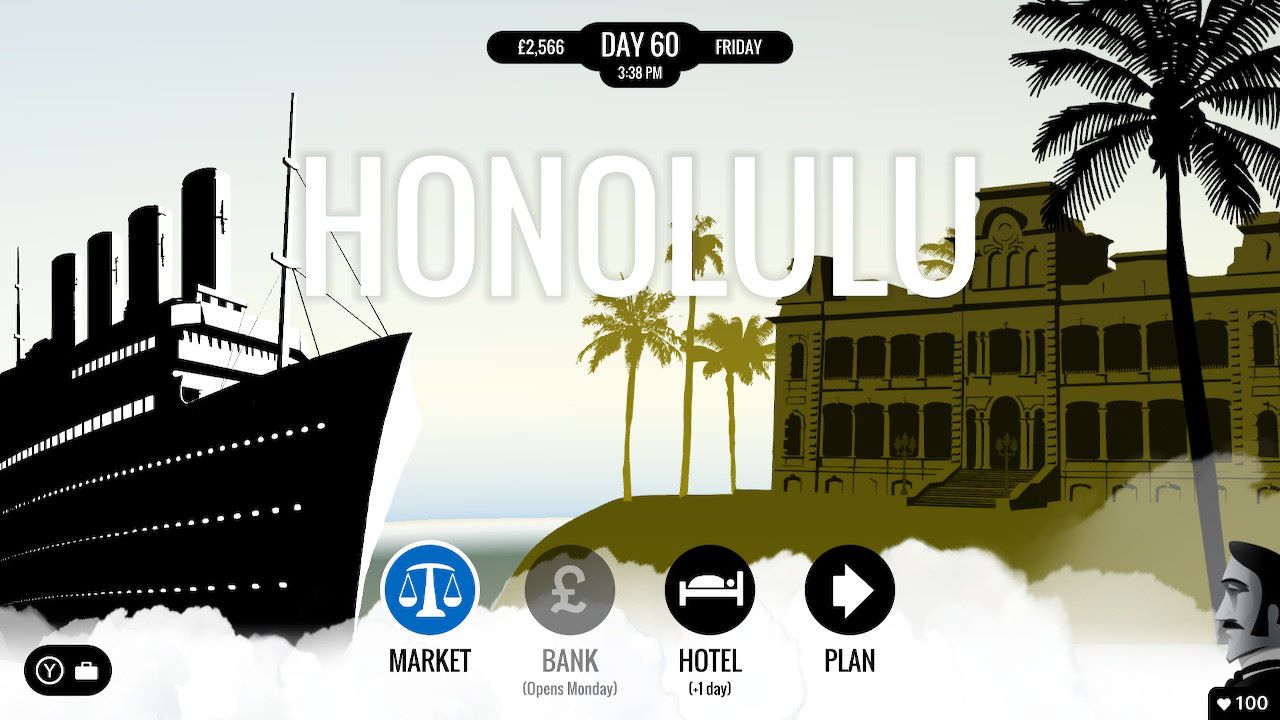 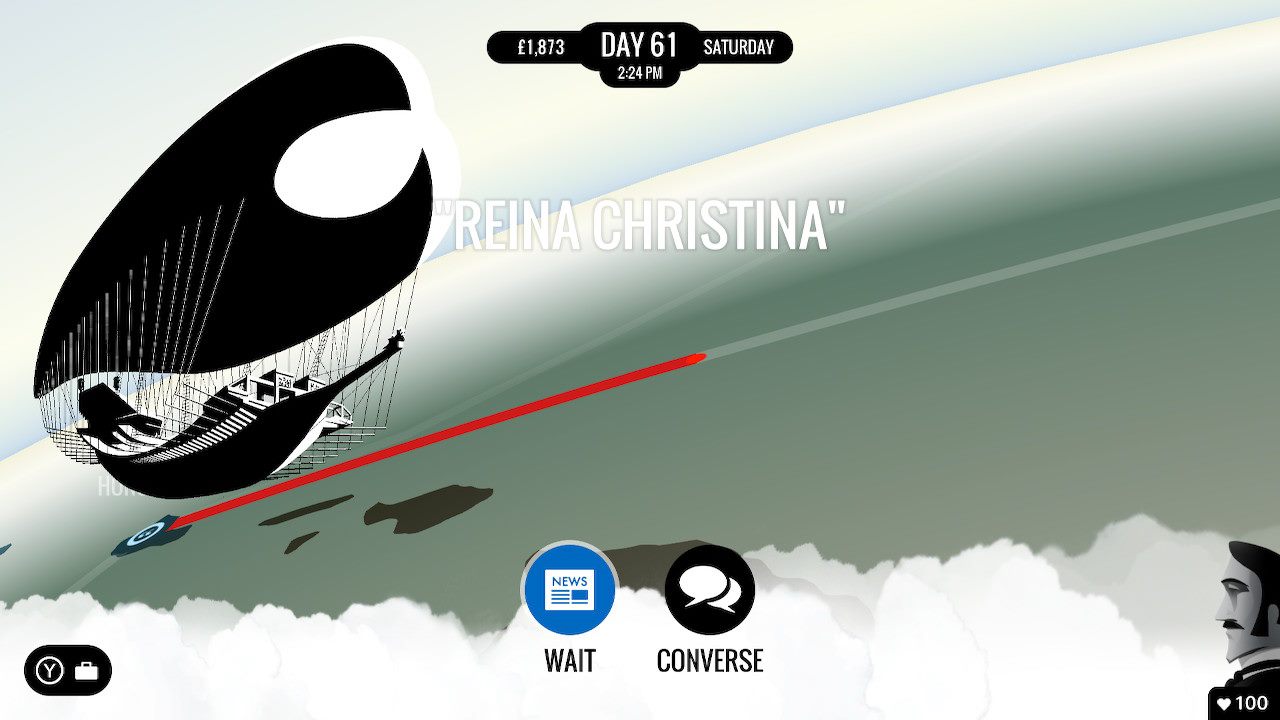 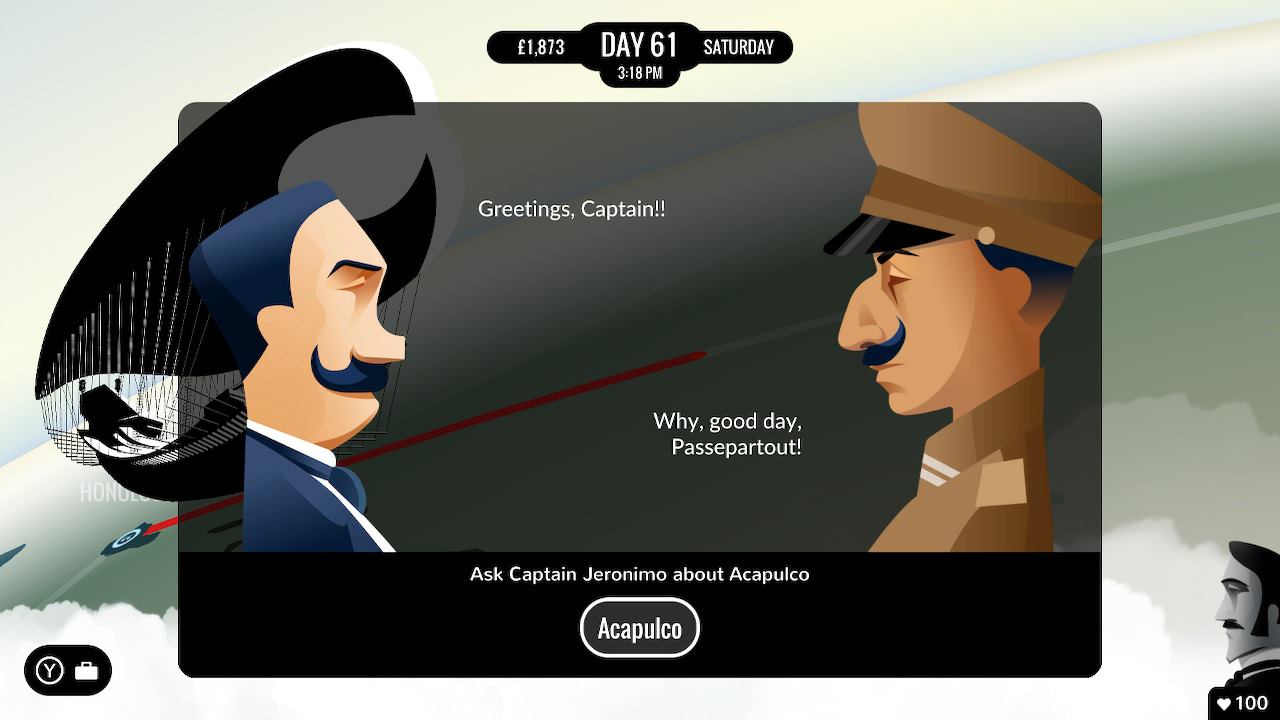 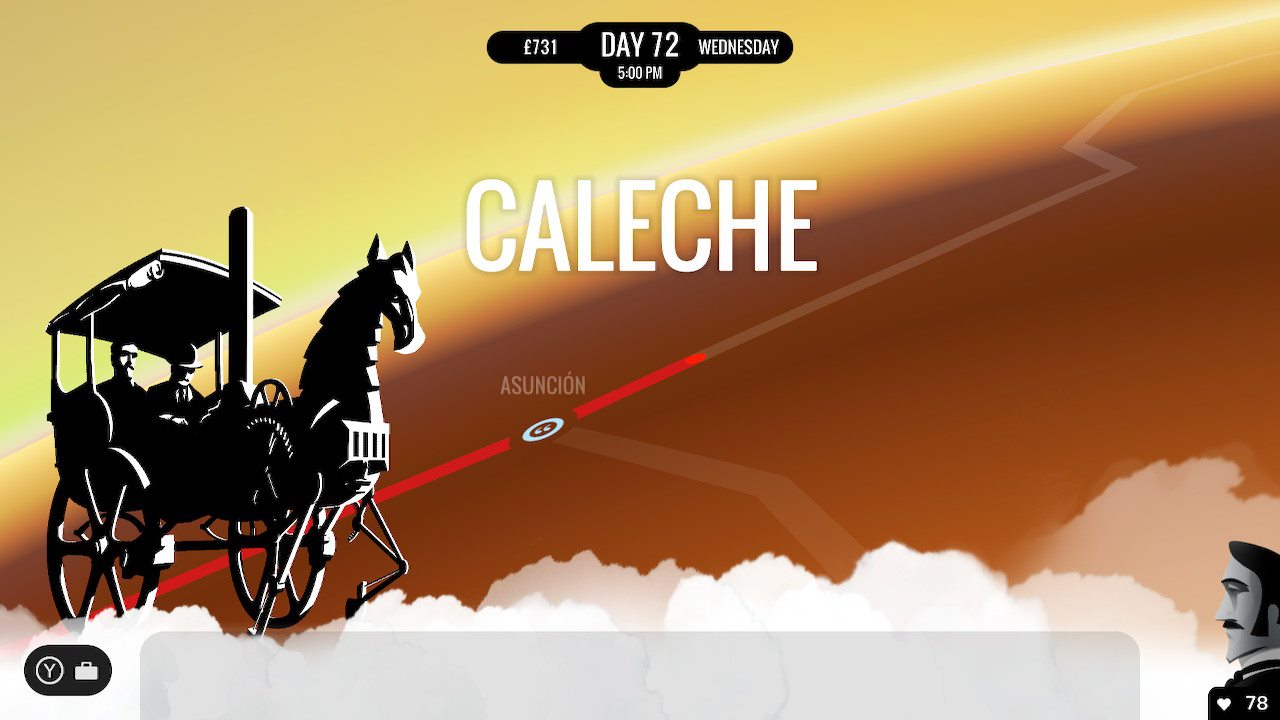 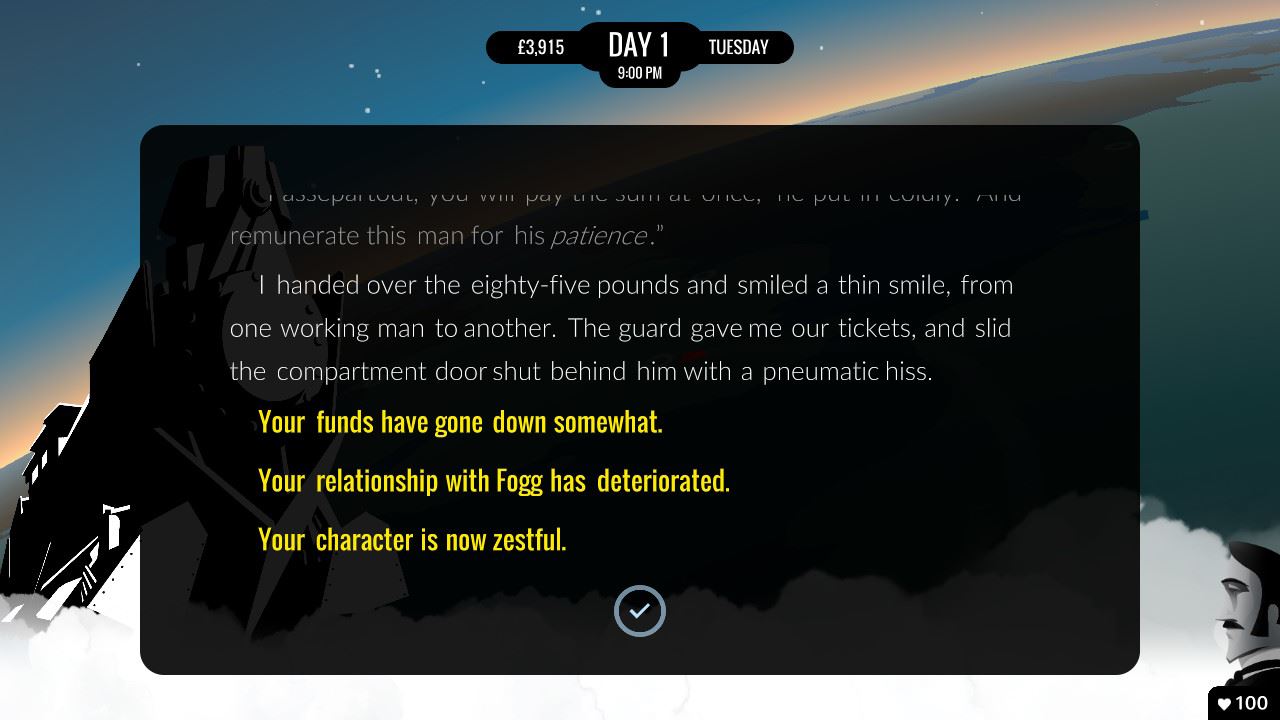 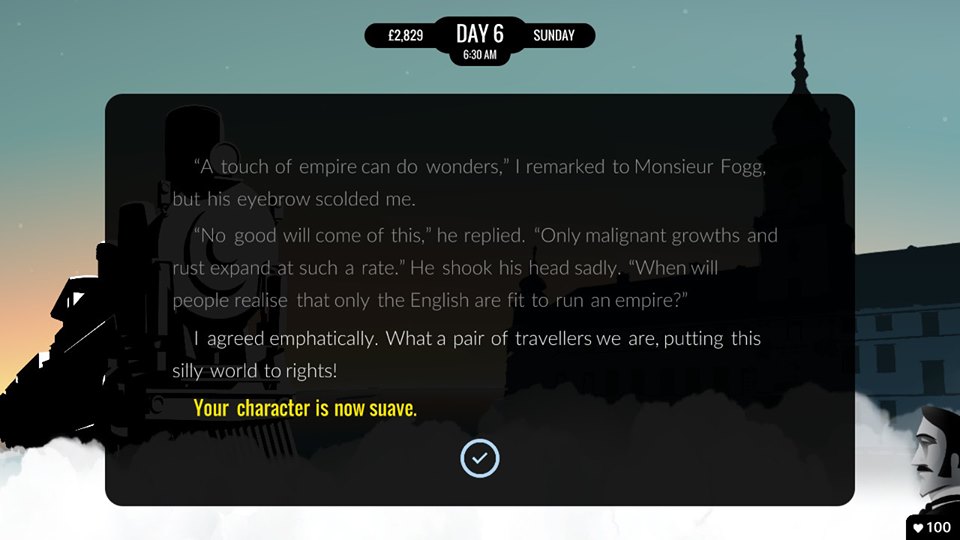 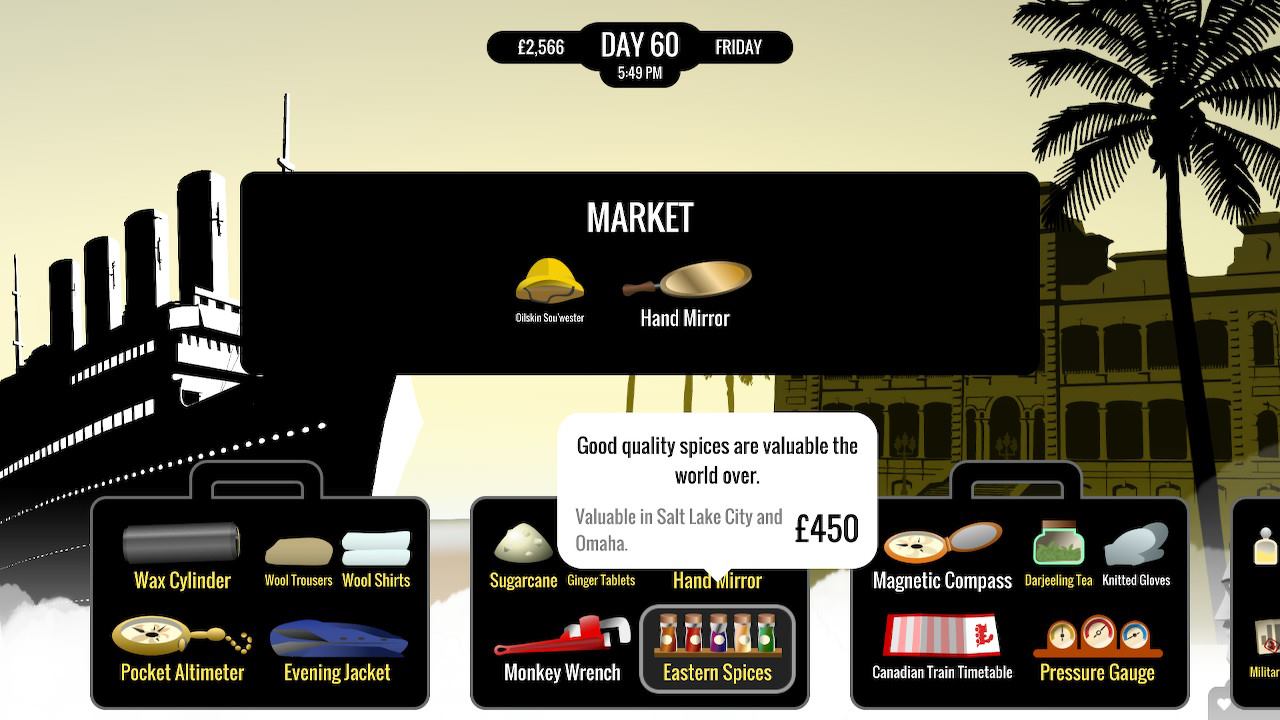