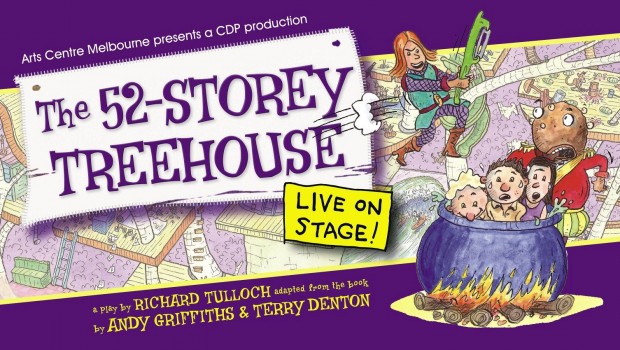 MELBOURNE, WEDNESDAY 9 MARCH 2016 – Andy and Terry are back and they’re coming to Arts Centre Melbourne from 1 – 17 April for the stage adaptation of The 52-Storey Treehouse. Their world-famous ever-expanding treehouse has 13 new storeys and is filled with fantastic inventions including a rocket powered carrot launcher, the Disguise-o-matic 5000 and even a Ninja Snail Training Academy!

The team behind the hit adaptations of The 13-Storey Treehouse and The 26-Storey Treehouse  have come together one last time to bring Andy Griffiths’ and Terry Denton’s bestseller The 52-Storey Treehouse to life on stage for a national tour following its Sydney Opera House premiere.

The best-selling, award-winning series of books created by much-loved duo Andy Griffiths and Terry Denton has inspired children across Australia to let their imaginations run wild. The 52-Storey Treehouse was the best-selling book in Australia in 2014 and won ABIA Book of the Year 2015, ABIA Book of the Year for Younger Children 2015 and ABA Nielsen Bookdata Booksellers’ Choice Award 2015.

The 52-Storey Treehouse takes place on a very special day. It’s Andy’s birthday, but Terry has forgotten! To make matters worse Mr Big Nose has mysteriously disappeared and Jill has fallen into a deep sleep and they just can’t wake her up. Andy and Terry set off on a crazy adventure tackling a world of startling obstacles including a hungry caterpillar, an angry vegetable kingdom and a 100 year ninja-snail epic voyage. Will they solve the mysteries and survive the dangers that test even their ingenuity?

“I’m so thrilled — and amazed — to see the spirit of this ridiculous book so faithfully reproduced on stage. Five and a half (million) stars!’’ Andy Griffiths said.

A play by Richard Tulloch. Adapted from the book by Andy Griffiths & Terry Denton