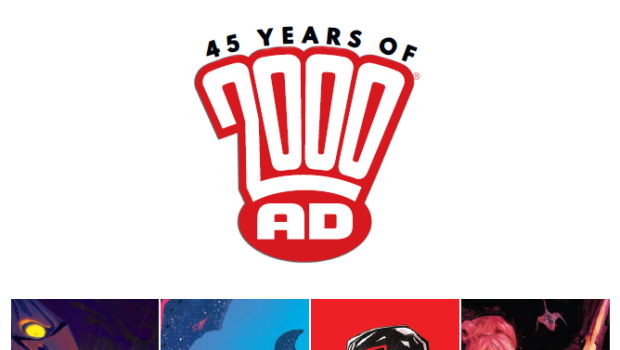 Summary: 45 years of 2000 AD has meant a lot of artists have contributed to the many stories and successes of this beloved publisher. In this collection we get to interpretations of some well known, and some less well known characters.

45 years is a long time to be putting out stories and as the first few pages of 45 Years Of 2000 AD – An Anniversary Art Book points out… that’s over two thousand and seventy issues published, which also means, that’s a lot of art. A number of the artists who have contributed over the years have their interpretations of some of the many characters that have come out in the pages of 2000 AD publications displayed here for viewers enjoyment. Whether an old fan or new… there’s a lot to enjoy here.

As this is focused more on the art, there’s not a lot of writing but what is here is a nice compliment to the art. We have a brief overview of 2000 AD, then we have minor artist bios accompanying the art. It’s not a lot, but it’s nice to have a little context for what we are seeing.

This is it… this is the reason you would have/will grab this book. If I was going to be super blunt… I’d say that the first thing that ever drew me to comics was the art. It’s an interesting industry to ponder that old notion of “never judge a book by it’s cover” because while there is a certain amount of truth to that… you could also say “let your eyes lead you to greater things” (or something like that). Comic art certainly lead me to some great stories and there’s nothing I like more than when the art and writing are in harmony, one enhances the other. Here we get a number of different interpretations of characters we have grown to know over the years and the sheer number of artists represented in this book means the art styles are quite varied, meaning there is likely something for every taste here. I’ll be honest, there are some images in here that I’m really not that fussed about, but equally there are many that I think are absolutely stunning and would be more than happy to have enlarged versions of on my wall. That is certainly the strength of this collection… there are plenty of images here to flick through and you are bound to find some that will just make your jaw drop.