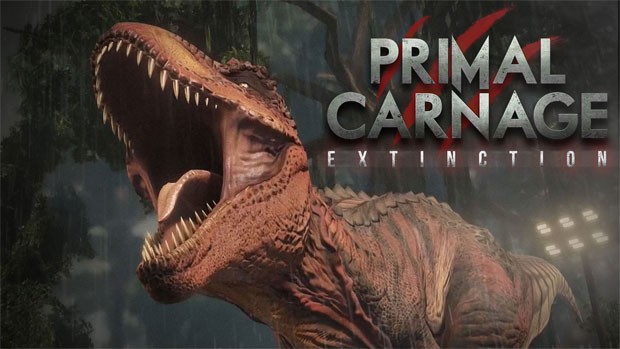 Summary: Unfortunately, this one is just another entry into the already well stocked pile of mediocre dinosaur games.

Do you fancy taking control of some legendary prehistoric monsters, and savagely rip human beings limb from limb? Of course you do! Primal Carnage: Extinction is an online multiplayer first/third person shooter that pits teams of humans and dinosaurs against each other through four different game modes. 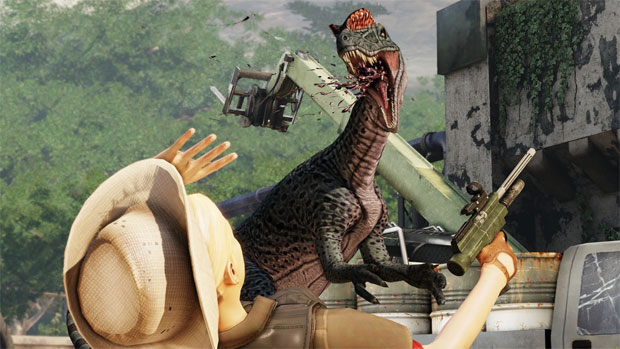 As great as the concept of Primal Carnage sounds, unfortunately it doesn’t end up the dino adventure it could have been. Though not being bad overall, bugs, glitches and a lack of depth have managed to turn Primal Carnage: Extinction into a distinctly average game. There are only four playable modes to choose from, these are:

Team Deathmatch – Whichever team gets the highest amount of kills wins. You are forced to swap between humans and dinosaurs after each round. Up to 16 players at a time.

Survival – You take on waves of dinosaurs.

Get to the Chopper – Play as dinosaurs or humans as the humans aim to capture a number of areas of the map in order to reach their final destination, and be airlifted to safety.

Free Roam – No scores being kept, basically a way to get used to the mechanics of both teams.

There are 11 types of dinosaurs to play as, including T-Rex, Spinosaurus, and Novaraptor which is basically a DNA splice of different kinds of Raptor species. On the human side, there and five classes of hunters. Pathfinder, commando, scientist, trapper and pyro. 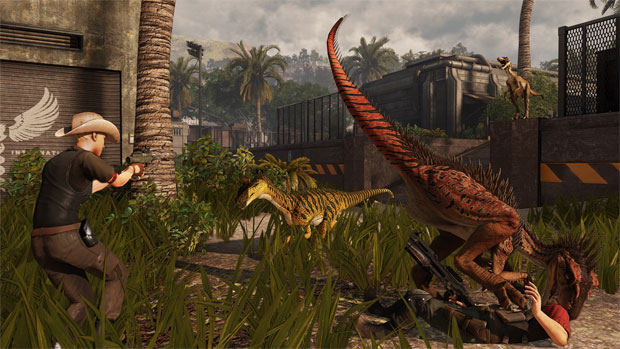 Having different classes of human hunter gives you the option to choose which method of attack and defence suites your preferences. The pathfinder is ideal for close combat situations thanks to the shotgun he is equipped with, as is the Pyro who who has a flamethrower.

My preference was to play as the trapper, due to having the option to fire a net trap over each predatory foe, restraining the ‘smaller’ dinosaurs leaving them vulnerable to be finish off with his dual wielded Colts. Overall the human classes are pretty diverse, so finding one that suits your style is relatively easy.

The right trigger is the main attack for both humans and dinosaurs, and the right bumper is reserved for a more special assault technique. For example, time it correctly and a Novaraptor will pounce upon any prey within its vicinity and proceed to tear them to pieces, while a Cryolophosaurus will spit acid into the faces of its enemies leaving them temporarily blinded. Playing as a human and getting a faceful of dino juice can be particularly difficult to work around as the screen goes a blackish-red resulting in your only option being to aimlessly fire round after round in multiple directions hoping for the best. 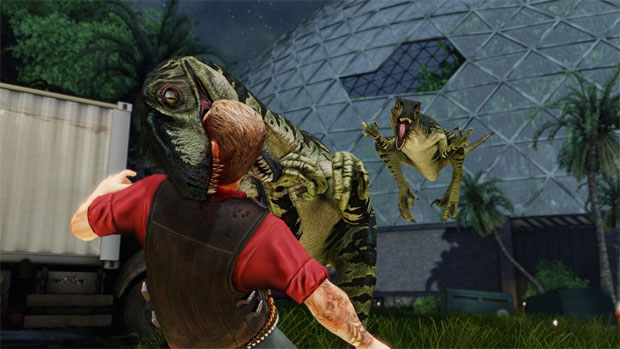 Taking on the larger prehistoric monsters such as the T-Rex and the Spinosaurus can become pretty redundant. You can blast away at them multiple times with an array of different weapons, but they have more resilience to bullets than a coked-up Tony Montana. For all the good a gun attached with a rocket launcher would be when faced by prehistoric powerhouses such as a T-Rex, in Primal Carnage you may as well be armed with a supply of ping pong balls and aggressively throw them in their direction.

I found the best course of action was to just focus on the less intimidating enemies, as that is your best chance of survival, especially in the Team Deathmatch modes. While the gulf in power between humans and the larger dinosaurs is accurate, utilising the right equipment such as mines and flares can turn the tide of battle into your favour against the smaller dinosaurs.

Thanks to Unreal Engine 3, for the most part, the shooting mechanics are okay, though nothing special. Control of the dinosaurs feels decent enough. The larger T-Rex, Spinosaurus and Carnotaurus are not exactly gracious in their movements but that is to be expected of creatures that weighed up to nine tonnes. The Raptors are fast and agile, though I found controlling the flying pteranodon the most difficult of the three types of jurassic animals on offer.

The maps can be selected through the main options before each game you join. In Team Deathmatch, if you’re playing on one particular map, that map will be the only one you will play in. If you want to play in a different map, you’re best bet is to exit and rejoin another game. It would have been nice if the game changed maps after several rounds, as most the time you’ll end up playing the exact same maps over and over again. The Docks heavily favour the dinosaurs due to them being able to access most areas, while other maps such as the Utility Base give the humans the chance to take shelter from the larger monsters, though still being vulnerable to the smaller dinosaurs. 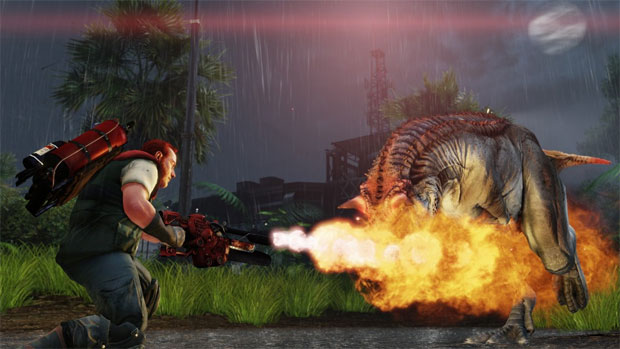 The humans can restock on ammo and health via various crates scattered throughout each map, while the dinosaurs regain their health by feasting on dino corpses.

Once you have spent sufficient time playing through Primal Carnage’s game modes, there’s not too much reason to come back. There is no leveling up, or progression system meaning there is no overall reward for putting hours of craft into the game. Survival mode gives you money to spend on patching yourself up and restocking your ammo while in combat. From the main menu, you can change various dinosaur skins, and appearances of humans but that’s all there is.

There are quite a number of bugs and glitches present. Most notably the larger dinosaurs having the special ability to teleport their heads through solid walls. As frightening as the prospect of that is, as far as we know it isn’t an attribute that dinosaurs had millions of years ago, and there really is no excuse for those kind of flawed physics occurring in any game. A simple QA test should have ironed those kind of faults out before launch. Survival mode is particularly glitchy, as I found myself standing in a line with fellow players easily picking off wave after wave of attacking dinosaurs because the AI wasn’t smart enough to attack from the side or behind.

Graphically Primal Carnage: Extinction isn’t particularly amazing to look at. However, the dinosaur animations and designs are very good, although the humans are not so well crafted. The sound effects and musical score are passable, with the dino sound effects being the best aspect of the overall audio. The maps are quite uninspiring, with the Docks being the most bland, though the arenas that are located in the forest are better executed in their design.

Primal Carnage: Extinction doesn’t overly satisfy, but it at least gives you the opportunity to take control of a selection of legendary dinosaurs. There’s not much depth to be found, and although it is not a terrible game, there’s only enough here to hold your attention for a few hours or so. Unfortunately, this one is just another entry into the already well stocked pile of mediocre dinosaur games.