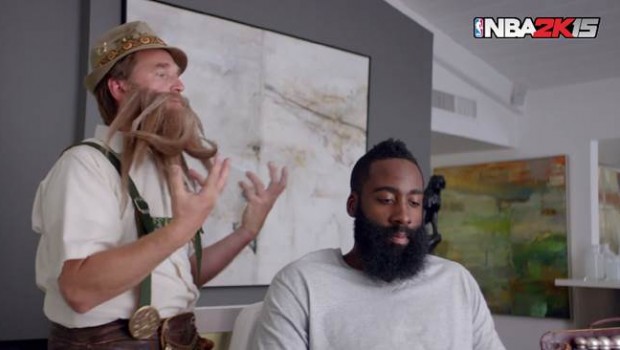 2K today revealed new in-game technology that enables NBA 2K15 players to put themselves into the game like never before with all-new face scan technology available on next generation consoles. By allowing users to scan their face directly into this year’s title through native first-party camera hardware, NBA 2K15 allows users to take customization to a new level for their MyPlayer. NBA 2K15 will be the first game on next gen consoles to allow players to create a true, 3D representation of their face through 2K’s facial mapping technology.  Now players can see themselves live the life of an NBA player in MyCareer mode and play alongside familiar faces online in multiplayer gameplay modes.

None of this means anything without a sweet trailer, of course, so we’re doubling down with two quite different takes on this new face-scanning tech:

In “Beard Guru” we take a look behind the scenes at what it takes for James Harden, Rockets NBA All-Star and NBA 2K15 highlight athlete to maintain his glorious facial furniture: http://youtu.be/PTLj2PU6KQY