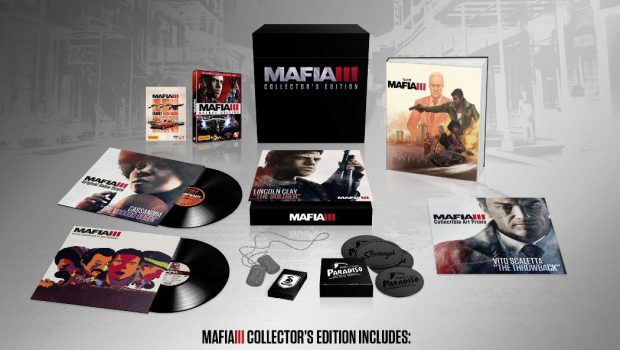 Sydney, Australia – June 2, 2016 – 2K and Hangar 13 today announced details for the collector’s edition of Mafia III, the next installment in the popular organized crime game series. The Mafia III Collector’s Edition is packed with physical and digital items, providing a window into the sights and sounds of a turbulent 1968 New Bordeaux, Louisiana, the seedy criminal underworld of Mafia III. The Mafia III Collector’s Edition will be available for AU$189.95/NZ$199.95 (MSRP) for PlayStation®4 computer entertainment system, Xbox One and Windows PC on October 7, 2016. Those who pre-order any edition of Mafia III will receive the Family Kick-Back bonus, which includes three exclusive vehicles and weapons available to players at launch.

In addition to the inclusion of Playboy and Alberto Vargas Estate art prints in the collector’s edition, players can discover and collect Playboy and Alberto Vargas content in-game in all versions of Mafia III. Collectible in-game Playboy content will immerse players into 1968 America with authentic magazine covers and additional magazine content.

Players looking for a Mafia experience prior to the launch of Mafia III can play Mafia II on PC when the title is re-released on Steam today. To celebrate the re-release, players can pick up Mafia II and all of the game’s downloadable content at an 80% discount today through to June 8, 2016. In Mafia II, players are immersed in the Golden Era of the Italian Mafia as Vito Scaletta, who also appears in Mafia III as one of Lincoln Clay’s lieutenants.