22nd November, SYDNEY AUSTRALIA: Today marks the beginning of a new generation of games and entertainment as the highly anticipated Xbox One hits shelves around the country.

22nd November, SYDNEY AUSTRALIA: Today marks the beginning of a new generation of games and entertainment as the highly anticipated Xbox One hits shelves around the country.

In Australia, only the second country in the world to launch after New Zealand, Xbox took over the Sydney skyline, with the iconic Luna Park face and Sydney Tower washed in a sea of Xbox green, to celebrate the biggest launch in Xbox history. 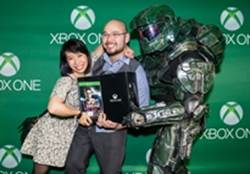 To bring in the official countdown to midnight – the first moment people could get their hands on their consoles – a show stopping 3D water projection took place on the harbour beneath the North pylon of the Sydney Harbour Bridge. The spectacular display saw a tribute to the gaming culture splashed across the water in a way never seen before by Sydney siders.

In an Australian first, the Sydney Tower switched off the Westfield sign for the evening and was transformed into a green beacon, its top doubling as the Southern Hemisphere’s largest countdown clock as midnight approached.

As well as Sydney’s iconic skyline turning green, the official Xbox One launch party was held at Luna Park in Sydney. Treated to an intimate performance by The Presets, the event was attended by more than 300 people, including 100 of the biggest Xbox fans in the country, who were also the first to collect their consoles.

Jeremy Hinton, Interactive Entertainment Business Lead, Microsoft Australia, says the launch of the Xbox One was a celebration of the gaming culture.

“It’s a great time to be a gamer and we are honoured to be a part of this incredible industry. More than 370 retail stores opened around the country to bring in this new era of gaming and entertainment. Thousands of people across the country headed out to collect their consoles at the stroke of midnight – that’s a passion and dedication that we are continuously humbled by.”

The first people in Australia to collect their Xbox One were Francis King and Angela Tran, a couple who were also amongst the first Australians to pre order the console, locking in their purchase with EB Games, Top Ryde almost two years ago!

Xbox One is the ultimate all-in-one entertainment system built for the 21st century living room which introduces a new world of games, music, live TV, movies, sports, apps and Skype, all personalised to a person’s interests and accessible with the sound of their voice.

Xbox One brings together the best games, the best multiplayer experiences through Xbox Live and rich entertainment offerings in a system that is built to deliver best in class experiences today and for the next decade. Additionally with the best games line up, Xbox One offers 22 launch titles and 10 exclusive Xbox One titles. Gamers will have the opportunity to explore award winning titles, created by world class developers such as “Titanfall,” “Forza Motorsport 5,” “Dead Rising 3,” “Ryse: Son of Rome” and “Halo,” as well as blockbuster third party games including “Watch Dogs,” “Assassin’s Creed IV: Black Flag,” “Destiny,” “Call of Duty: Ghosts” and “Battlefield 4.”