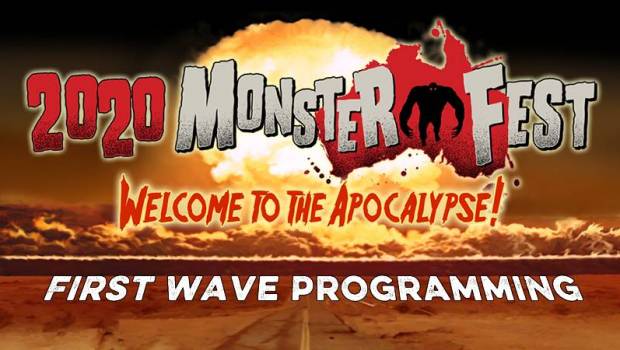 Once again in partnership with EVENT CINEMAS and CINEMA NOVA, 2020: MONSTER FEST will see all five cities play host to four days of diverse and highly imaginative film programming; a celebration of the latest and greatest genre cinema from around the world.

Following its World Premiere at the Sundance Film Festival where it was met with universal praise, we are pleased to announce that the sci-fi/horror POSSESSOR will be our Opening Night Film of the festival, in its Australian Premiere. Abstract, immersive and unflinchingly brutal, POSSESSOR is the sophomore feature of Brandon Cronenberg (ANTIVIRAL) and is a truly remarkable work of cinema that reaffirms Brandon’s status as a visionary filmmaker. Christopher Abbott (IT COMES AT NIGHT) and Andrea Riseborough (MANDY) give exceptional performances in this sophisticated story of a corporate assassin who may have inhabited the wrong body in which to enact her next mission.

For the first-time in MONSTER FEST history, we are excited to announce that we will host the World Premiere of OCCUPATION: RAINFALL simultaneously across all five festivals. Filmmaker Luke Sparke‘s highly anticipated follow-up to the 2018 Aussie sci-fi blockbuster sees Ken Jeong (THE HANGOVER Trilogy) and Daniel Gillies (THE ORIGINALS) join a returning cast that includes Temuera Morrison (AQUAMAN), Dan Ewing (BEAST NO MORE) and Trystan Go (THE FAMILY LAW). Picking up two years after the events of OCCUPATION, the war for earth rages on, however the alien invaders are no longer our only threat as factions form between survivors and the race to save mankind is on.

Steven Kostanski, formerly of Canadian film collective Astron-6, follows up his acclaimed 2016 Lovecraftian love letter THE VOID with the light-hearted and ultra-violent slice of cosmic comedy/adventure, PSYCHO GOREMAN, making its Australian Premiere. This small-town tale of intergalactic proportions follows two kids who are in possession of a highly coveted magical amulet that allows them the ability to control an ancient alien overlord.

Modern takes on the works of William Shakespeare were all the rage in the nineties with films such as Baz Luhrmann’s highly-stylised ROMEO & JULIET, the Heath Ledger breakout hit 10 THINGS I HATE ABOUT YOU and of course the dirty granddaddy of them all Lloyd Kaufman‘s TROMEO & JULIET. If you thought that TROMEO & JULIET was the greatest Shakespearean adaptation ever committed to celluloid (yes, even above Kenneth Branagh), prepare yourself for #SHAKESPEARESSHITSTORM, as Lloyd and the Troma team go back to the Bard for their latest outing. #SHAKESPEARESSHITSTORM is a modern retelling of Shakespeare’s THE TEMPEST but with the drier aspects removed and/or improved upon by the inclusion of excess bodily fluids, hyper-violence, gore and in fact anything that could potentially be deemed offensive, in fact we’ll be surprised if this film isn’t #cancelled before its Australian Premiere at MONSTER FEST.

Following up an instant cult classic like ROBOCOP is no mean feat but filmmaker Paul Verhoeven is no ordinary filmmaker, not only did he rise to the challenge, he crushed it with his fearless, subversive and visionary take on legendary author Phillip K. Dick’s classic tale of caveat emptor. Join Arnie and the gang as we go a vicarious vacay to Mars to celebrate Quaid’s divorce and of course the 30th Anniversary of this sci-fi/action classic with the Australian Premiere of an all-new 4K Restoration of TOTAL RECALL.

From the mind of writer/director Brandon Cronenberg, POSSESSOR is an arresting sci-fi/horror about elite, corporate assassin Tasya Vos (Andrea Riseborough). Using brain-implant technology, Vos takes control of other people’s bodies to execute high profile targets. As she sinks deeper into her latest assignment Vos becomes trapped inside a mind (Christopher Abbott) that threatens to obliterate her.

OCCUPATION: RAINFALL occurs two years into an intergalactic invasion of earth, while survivors fight back in a desperate ground war. As casualties mount by the day, the resistance and their unexpected allies uncover a plot that could see the war come to a decisive end. With the alien invaders hell-bent on making Earth their new home, the race is on to save mankind.

Prospero (played by director/co-writer Lloyd Kaufman), a brilliant and generous pharma-scientist, has had his life and career ruined by blind, greedy, perverted pharmaceutical execs, causing him and his very hot daughter Miranda to flee from NYC to Tromaville, New Jersey. When the evil execs and their elite guests take a celebratory luxury cruise to North Korea, Prospero uses his science, magic, and a load of whale laxative to create the titular Shitstorm, wrecking the cruise ship and causing its execs to wash up on the shores of Tromaville. Prospero’s planned a brutal revenge – with all the sex, mutations, musical numbers, and violence that Shakespeare always wanted but never had!

Haunted by recurring dreams of another life on Mars, Douglas Quaid (Arnold Schwarzenegger) is drawn to Rekall Incorporate to implant virtual vacation memories of Mars, using a special program with the identity of a secret agent. Something goes wrong and the procedure is interrupted. The life of Douglas turns upside down, and he travels to the red planet trying to discover who he is.

VIP Passes are strictly limited, with the initial allocation being 20 per location, with no guarantee of further VIP Passes being available at a later date. The VIP Pass gains all-access to all Monster Fest screenings and events from Thursday 29th of October to Sunday 1st of November.