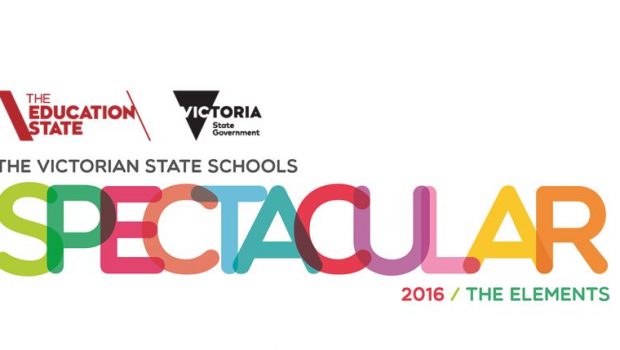 TICKETS ON SALE NOW FROM TICKETEK

MAGIC, MUSIC, DANCE AND SCIENCE IN THE SPOTLIGHT

Rehearsals are well underway for the Victorian State Schools Spectacular as 3000 students get ready for this year’s show, titled  ‘The Elements’.

Students from more than 200 government schools are preparing for the September 10 extravaganza  at Hisense Arena which will feature everything from show stopping vocals, high energy dance to awe-inspiring magic tricks and skating…not to mention a giant robot cat puppet all brilliantly choreographed for this three hour show.

The show will be a concoction of the ancient elements of Earth, Air, Fire, Water, combined with the Periodic Table of Elements – all served with a dash of pop music and stage magic.

See the stars of tomorrow, today at this year’s Victorian State Schools Spectacular screen including

In the lead up to September 10, the students have the opportunity to learn and work with industry professionals such as Musical Director Chong Lim (Sydney Olympics, Dancing with the Stars and John Farnham), Creative Director Neill Gladwin (Los Trios Ringbarkus), Green Room Award winning lighting designer Paul Jackson, Puppetry team Felipe Reynolds (who created King Kong for the Musical) and Ed Boyle,  choreographers Yvette Lee and Deon Nuku.  The Spectacular also has a partnership with the Australian Chamber Orchestra, providing tutoring and mentoring to student string musicians, as well Jason Coleman’s Ministry of Dance.

The Spectacular provides a hands-on training experience for students who want to work behind the scenes in areas like stage management, audio, lighting, photography, makeup, costume and graphic design. These students participate in workshops with some of the best in the trade such as Norwest Productions, Production Resources Group, and CVP.

The 2016 Victorian State Schools Spectacular will be held before an audience of more than 10,000 people at Melbourne’s Hisense Arena on Saturday 10 September, with one show at 1pm and another at 6.30pm. The show will also be broadcast on Channel 7 at a later, to-be confirmed date.

The Spectacular contributes to a number of the Government Education State targets, including more students reaching the highest level of achievement in the arts, ensuring our kids are happy, healthy and resilient, and increasing pride and confidence in our schools.

Presented by the State Government of Victoria, the 2016 Victorian State Schools Spectacular – The Elements, is a not-to-be-missed event.

For more information, please visit http://www.education.vic.gov.au/about/events/Pages/spectacular.aspx and for more music the Australian Chamber Orchestra at https://www.aco.com.au/