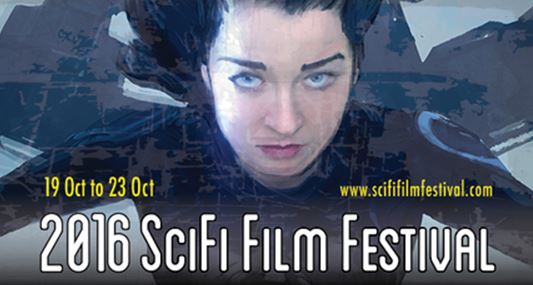 “Good job, son. I’m very proud of you. Now, what’s your next job?” These were the words that master director, Ridley Scott, offered his son, Luke, upon seeing his debut feature film, Morgan. Coming from the famously terse director of Blade Runner and Alien – two cornerstones of the sci-fi genre – that’s high praise indeed. And it’s well deserved too. A chilling, keenly intelligent meld of horror and sci-fi in which mad science leads to violence and terror, Morgan will appropriately bring The 2016 Sci-Fi Film Festival to a close, with the fest opening with the Ridley Scott-produced Equals. A cerebral chiller that announces a dazzling new filmmaking talent, Morgan – which stars Kate Mara, Anya Taylor-Joy, Rose Leslie, Paul Giamatti, Toby Jones, Jennifer Jason Leigh, and Michelle Yeoh – will still be rattling around in your head long after the credits have rolled.

Amongst the already announced selection of cutting edge, hotly contemporary sci-fi titles (including Rupture, Approaching The Unknown, The Purge: Election Year, and This Giant Papier Mache Boulder Is Actually Really Heavy), The 2016 Sci-Fi Film Festival has also made room for something very special indeed, with the 1982 classic, Star Trek II: The Wrath Of Khan, set to screen in a brand new 2K remastered director’s cut version never before seen in cinemas. Don’t hesitate: this will literally be your one and only chance to see the best Star Trek movie as it was intended on the big screen in Australia. And if that’s not enough to get you thinking about which Star Trek character you want to come dressed as, Star Trek II: The Wrath Of Khan will be screening straight after the profoundly moving documentary, For The Love Of Spock, in which director, Adam Nimoy, pays warm and wonderful tribute to his father, Leonard Nimoy, and the character that he made famous.

Along with the main programme at The Ritz Cinema, Randwick, there will also be two very special free events at The AFTRS Theatre on Sunday, October 23. 10:00am will see the blast-off of “The Upcoming Australian Film Showcase”, an exclusive look into the minds behind three new Australian sci-fi flicks – The Osiris Child: Science Fiction Volume One, Blue World Order, and Space/Time – with the filmmakers screening clips from their works and answering audience questions. Directly afterwards at noon will be a very special presentation of Cerulean, in which concept illustrator, Tani Kunitake (The Matrix, Avengers, Star Wars), will illustrate performer, Dani Swan, live in person, and then present their upcoming collaboration on the multi-media mind-bender, Cerulean, a boundary-pushing comic book, TV series, and feature film.

The 2016 Sci-Fi Film Festival has also made the official announcement about its two Short Film Programmes, which will explode on Saturday, October 22 at 4:00pm and Sunday, October 23 at 2:00pm. This year’s short film line up celebrates both established filmmakers and new talent, and boasts titles from around the globe, with entries from Australia, UK, France, Italy, Hungary, Slovakia, Russian Federation, Cyprus, Luxembourg, Spain, USA, and South Africa. “I’ve been absolutely astounded by the short films that we’ve assembled for The 2016 Sci-Fi Film Festival,” says festival founder and director, Dov Kornits. “The diversity of the talent and ideas on display is breathtaking, and what these gifted filmmakers achieve with their limited budgets will blow you back in your seats. Trust me, the next Ridley Scott, George Miller, and James Cameron are in amongst this incredible crew of directors.” See below for the full list of titles in The 2016 Sci-Fi Film Festival’s two Short Film Programmes.

SCI-FI SHORT FILM SESSION 1
Lockbox 1:26mins (UK)
A loving mechanical puppet looks for a way to save his makers business through the ultimate sacrifice. Director: Peter Cotter
Voyager 9:30mins (France)
Sent in 1977, the Voyager Golden Record was intended to introduce humanity to possible beings in outer space. But centuries later, Voyager is back on Earth. A little girl who lives alone in a destroyed town finds the space probe, uncovering music, pictures of nature, and past humanity. Director: Loic Magar, Roman Veiga

Signature Tune 5:57mins (Australia)
There is nowhere to hide from despair when the heartbreak of reality breaks the barrier to the dream-world, in this exploration of a tortured subconscious. Director: Josef Arbiv

Lazyboy 11:30mins (Australia)
Ray discovers his La-Z-Boy recliner is a one-minute time machine. Will he learn from his mistakes, or is he destined to repeat them forever? Director: Dave Redman

Can You Decide 4:55mins (Italy)
This is the official music video of the track “Can You Decide” written by the Manchester (UK) singer/songwriter, Jon Kenzie. The video tells a story of a lonely robot musician who is struggling between the desire to travel and play music throughout the galaxy or go back home to be with the one he loves. Director: Lu Pulici

IM Perfect 6:36mins (Hungary)
In 2046, a young woman dates a handsome guy who has some weird plans with their hands. Director: Zsuzsanna Koszti

Chronos 11:00mins (Slovakia)
A troubled old businessman finds himself looking at the world upside down through a hotel room where time runs backwards. Director: Martin Kasimir

True Copy 11:11mins (Russian Federation)
Igor’s uncontrolled transformations into other people force him to turn to the only person able to stop this… Director: Olga Belva

Sanctioned 17:51mins (Cyprus)
In a dystopian future, it is legal to murder someone providing that you have legally applied to The Ministry Of Sanctioned Homicide to be given legal authorisation to do so. Elias visits the Ministry to apply to kill one of his parents. Director: Harry Ayiotis

SCI-FI SHORT FILM SESSION 2
The Light Eater 12:00mins (Luxembourg)
Today is Light Eater’s very first day of school. Light Eater has to sort things out on his own. Since his father passed away, his mother hasn’t been able to overcome her sorrow and has turned away from her son. Since this day, Light Eater has been burdened by a curse: when he opens his mouth to speak, he swallows the light around him. But, Light Eater also has a gift: he loves to draw and his drawings are full of bright colors that brighten his existence. Having only just arrived at school, Light Eater is the victim of a bully who tears up his drawing. Which of his sides will take over, light or dark? Director: Sean McCormack

The Last Journey of the Enigmatic Paul W.R. 18:00mins (France)
The red moon threatens our existence on earth. Our only hope is the enigmatic Paul WR, the most talented astronaut of its generation. But few hours before the start of the Great mission, Paul disappeared. The one that the whole world considers as a hero hides in fact a terrible secret: since his youngest age, Paul W.R hears our thoughts. The consequence of this strange gift: Paul W.R doesn’t support us anymore. If he accepted the Mission without return, it’s not by heroism. It’s to find, finally, the peace of mind of a perfect silence. Far from our thoughts. Director: Quirot Romain

ZONA-84 15:25mins (Spain)
ZONA-84 is a futurist short movie set in a post-apocalyptic Barcelona. The mood of social criticism is related to the abuse of power which controls the earth essential resources. Director: Lonan Garcia

Waste Of Time 7:00mins (Australia)
John hasn’t left his bedroom in 10 years. Today he could, in a Time Machine. Director: Ben Nicholas

F Meat 17:20mins (Australia)
When The CEO of a synthetic meat empire reveals his product is secretly grown from human flesh, he must use extreme measures to persuade his morally opposed successor to save his legacy and the starving masses. Director: Sean Bell

The Garden 13:36mins (USA)
In the Garden, humans get converted into A.I. constructs to survive. But Luc – a rebellious ballerina – would rather die than conform. When in 2089 humans become an out-of-date concept, the only way to survive is to integrate into A.I. constructs. Yet Luc—a rebellious ballerina—would rather die than conform. But when she meets an odd robot Azul, the idea of integrating into a better version of herself suddenly sounds tempting. Director: Natalia Lyudin

Johnny Clegg – Take My Heart Away 5:20mins (South Africa)
The story follows a young South African boy, Lindo, who lives in an informal settlement that borders an international spaceflight launch site. Lindo is infatuated with space travel, his hideout in-between is filled with articles and old books on space travel, as well as drawings and pictures of rockets and spaceships. His dream is to fly amongst the stars, far away from his destitute township life. One day, Lindo sees an opportunity to sneak on board a space shuttle as a stowaway. Director: Jaron Clegg