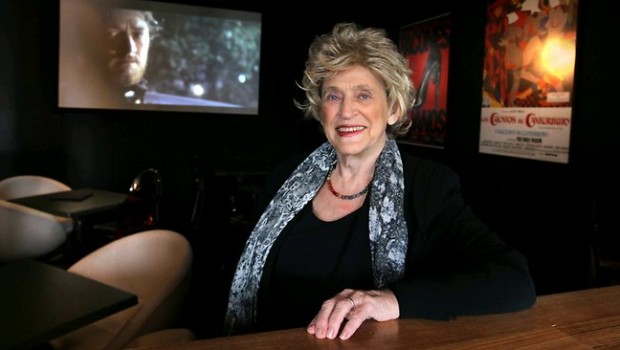 The 2015 Natalie Miller Fellowship grant was awarded to Courtney Botfield today, by Natalie Miller at the Australian International Movie Convention, the most prestigious annual event in the industry attracting distributors, exhibitors, producers and filmmakers from Australia and New Zealand.

Established in 2011 in recognition of the unique contribution of Natalie Miller AO, the Fellowship awards a grant of $10,000 to a woman in the Australian screen industry who has demonstrated initiative, entrepreneurship and excellence. The only grant of its kind in the country, the NMF was created to recognise and nurture the next generation of female leaders in the Australian Screen Industry, and inspire them to achieve outstanding success at the most senior levels of the business.

Courtney Botfield, a distribution specialist with over 15 years’ experience in independent film, has recently developed a focus on the burgeoning field of Impact Producing, targeting films with strong social messaging and the potential for creating real change. With her grant, she plans to fill the market gap in this area, through increasing her knowledge and practice of sourcing innovative pathways for the financing and distribution of these types of films. Botfield plans to attend the 2016 Media That Matters Conference in Washington DC, meet leading social impact and analysis practitioners in New York, and engage a business mentor aligned with the philanthropic and social enterprise sectors.

On receiving her grant Botfield said, “Natalie Miller has long been an inspiration for me in my years working in distribution and exhibition. To receive this fellowship in her name that vigorously promotes the role of women as leaders and encourages gender equality across all facets of the industry is an absolute privilege and honour. The opportunities this fellowship will afford me in my new entrepreneurial ventures are boundless and I look forward to an exciting year ahead.”

This year’s applicants came from all major Australian states and were assessed by a selection panel of highly respected and distinguished screen professionals from across several sectors of the industry.

Natalie Miller AO said, “I am delighted that Courtney Botfield has been named as the Natalie Miller Fellowship winner for this year. In the spirit of the Fellowship encouraging leadership in the film industry business world, Courtney has demonstrated leadership skills in starting her own business and choosing a new area to explore – alternate and innovative pathways in film financing and distribution. I think she is an ideal winner of the Fellowship and we wish her well to inspire others in the task of building on women’s leadership goals so all women may one day go through the glass ceiling and take their place in equal numbers on boards and in CEO roles.”

The Natalie Miller Fellowship is funded from donations made to the Natalie Miller Fellowship Endowment Fund and through the generous support of Film Victoria. Past recipients who have represented the NMF’s vision to develop, inspire and provide leadership include 2014’s winner Rebecca Hammond (Deluxe Australia), 2013’s winner Harriet Pike (Wildbear Entertainment), and 2012’s winner Rachel Okine, (StudioCanal).

For more information about the Natalie Miller Fellowship and 2016 applications visit:

Natalie is a pioneer of Australian arthouse cinema and a visionary distributor. In 1984 Natalie took over the Longford cinema in Melbourne’s South Yarra and established it as one of the first arthouse cinemas in Australia. She is best known as the co-founder of the iconic Cinema Nova in Melbourne and as the founder of distribution house Sharmill Films.