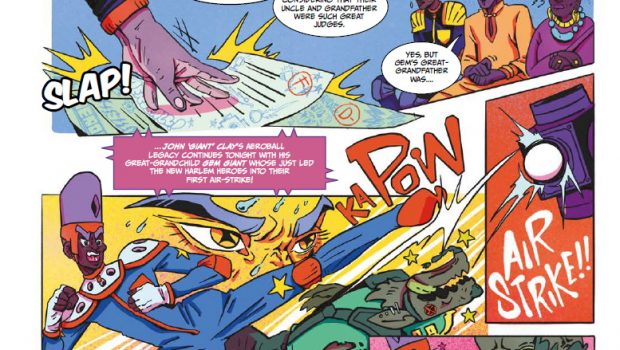 Summary: Well worth having a look at even if you have never heard of 2000AD and even if you have been following it for a while it is good to read stuff without having to dig through back issues.

As I have said in the past while I was aware of the 2000AD publication growing up I never actually read any of them until the reissues started coming out. There are 46 years of publication they can choose from to publish these volumes so they seem to have chosen stories that are easier to get into and don’t need a lot of knowledge of the characters involved. You can still go into the Judge Dredd stuff an there are collections of just his stories.

While it does say for “all ages” some of these stories do seem to be aimed at younger readers with Harlem Heroes being one of my favourites due to the bright colours and great character designs.

In general the stories are all pretty good, the parts referencing social media do stick in my craw somewhat, how do you even know it would be called that by the time this story was set?

If you are looking for a way into 2000AD this is an idea way to dip into it without having to make a big commitment and going doing deep into the lore so you can understand what is going on.

While all the characters inhabit the same universe, they are not really connected to each other in terms of story. Also something that sticks out is that is the UK version of what they think a post-apocalyptic USA police state would look like so it has a different spin on it.

I would recommend this to fans of the 2000AD series or newcomers as even if you have been following the series it might be good to catch up with some of the older stories again and not have to dig through back issues. An excellent introduction to the series if you haven’t seen it before and well worth your time. 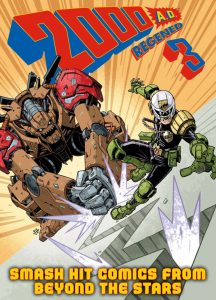