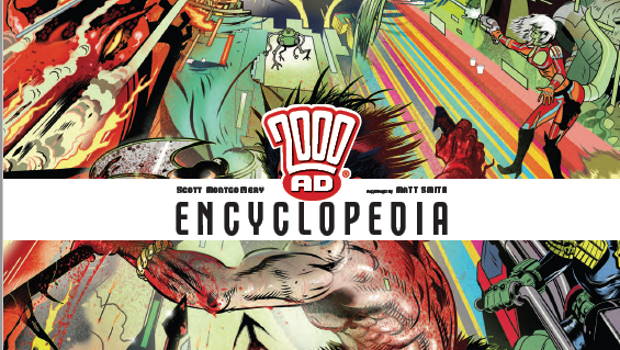 Summary: An easy choice for fans of 2000 AD, it simply must be in the collection!

It had been decades between my first reading Judge Dredd comics and getting to review them, in that time I had forgotten most of the details of Judge Dredd and the other characters that fill the pages of 2000 AD comics. So with the 45th anniversary of 2000 AD and the publication of the 2000 AD Encyclopedia I can quickly bring myself back up to speed. If you wanted to know who any of the main (or ancillary) characters are or where to find more stories featuring them, this is your guide. If you want to know back ground information on some of the creatives and how certain characters came to be… this is your guide.

It is really nice to have a neatly organised reference book for characters within a comic universe. If you find yourself confused about a character in a 2000 AD comic, all you need to do is look up their name and jump to their page and you will learn about them, where they fit into things and which comics they show up in. Each character gets a general over view (their Situation Report) and then some bonus information, trivia type morsels (the Supplemental Report). I would have been just happy with the information about who the characters are, but the extra information both about the characters and or the how they came about, who was involved and other additional snippets of background are icing on the cake.

Not too surprisingly given the vast number of characters here and the vast number of comics they come from, there are many different art style present here. From simple black and white images, to bold line work with vibrant colour to beautiful painterly images, there’s arguably something for everyone here. Even just within the first few pages, we have the energetic and vibrantly cover art followed by a highly detailed painted image with a fantastic sense of lighting. Obviously these images are plucked from a multitude of comics and don’t guarantee that the run of any one character will be consistent to that quality or style… but by flicking through this entire collection you should get a decent idea of the overall quality and styles of 2000 AD artists and whether they are likely to be to your taste or not.

It really is a fantastic idea to compile a list of all the characters that have shown up in the pages of a publishers comics and to not only give details about the characters themselves but some of the “behind the scenes” that brought them to the pages. An easy choice for fans of 2000 AD, it simply must be in the collection. For anyone else, it is a high price for the lovely hard back… but it is a fantastic reference for anyone who wants to explore the worlds of 2000 AD!