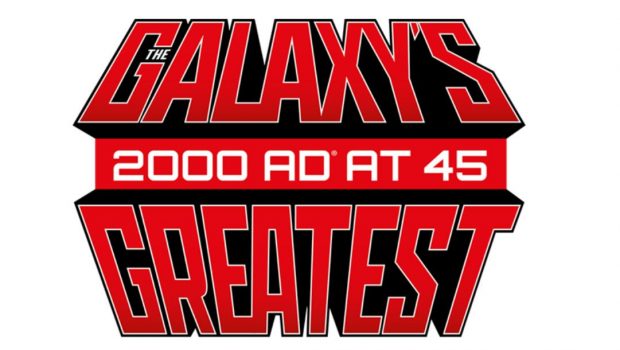 Rebellion is delighted to announce The Galaxy’s Greatest: 2000 AD at 45 – a star-studded online convention celebrating four and a half decades of the groundbreaking British comic!

Featuring celebrity fans and legendary creators, The Galaxy’s Greatest will stream online and for free on 26 and 27 March on 2000 AD’s social media channels and YouTube, and Rebellion’s dedicated Twitch stream.

The two-day show will feature top flight guests on more than a dozen panels, all discussing the impact of 2000 AD on comics and culture over almost half a century, as well as announcements and new merchandise.

Guests from the world of entertainment will include award-winning comedians Robin Ince (The Infinite Monkey Cage), Desiree Burch (Taskmaster, Unf*ckable), Dane Baptiste (Mock the Week, 8 Out of 10 Cats Does Countdown) and Mitch Benn (The Now Show), scientist and broadcaster Adam Rutherford (BBC Radio 4’s Inside Science), bestselling authors Ian Rankin OBE (Rebus) and Louie Stowell (Loki: A Bad God’s Guide to Being Good), and political commentator Ian Dunt (i newspaper, How To Be A Liberal).

The event will throw a spotlight on the people who have helped make 2000 AD the galaxy’s greatest comic, with creators both new and legendary sharing their stories and insights on the comics-making process — including a feature interview with the co-creator of Judge Dredd and Strontium Dog, John Wagner, as well as panels with Garth Ennis (The Boys, Preacher), Rob Williams (Suicide Squad), Alex de Campi (Archie vs Predator), Sean Phillips (Criminal), Anna Morozova (Judge Anderson), John McCrea (Hitman), Dan Cornwell (Rok of the Reds), Aleš Kot (Zero), and more to be announced.

The next 45 years of 2000 AD will also be discussed with owners and publishers Chris Kingsley OBE and Jason Kingsley OBE, and current editor Matt Smith – now the longest serving editor in 2000 AD history.

And with many, many more creator and celebrity guests yet to be revealed, The Galaxy’s Greatest promises to be an unmissable experience befitting such a milestone for Britain’s most groundbreaking comic!

Jason Kingsley OBE said: “This is such a landmark anniversary for 2000 AD and I’m looking forward to hearing from this fantastic line-up of guests just how it has had an influence far beyond its pages.

“When Rebellion saved 2000 AD back in 2000, many people had long predicted its demise – but over the last two decades it has truly gone from strength-to-strength and is now back in its true place as one of the pillars of British culture. As the custodians of its legacy and guardians of its future, we’re proud and delighted to celebrate four and a half decades of Thrill-power with The Galaxy’s Greatest.

Ben Smith, head of Rebellion Publishing, said: “With the pandemic continuing to make in-person events difficult and prone to cancellation, we’ve decided to move our event marking 45 years of 2000 AD online – but it does mean that fans all over the world will be able to join in and celebrate the comic’s creators and legacy.”

The first issue of 2000 AD landed on shelves on 19 February 1977 – a brand new science-fiction title created by Pat Mills that would go on to redefine not just comic books, but become a genuine cultural force in Britain and abroad. Its blend of violent sci-fi action, grim anti-heroes, and anti-authority ethos made it a massive hit, delighting, inspiring, and influencing generations of children and young people.