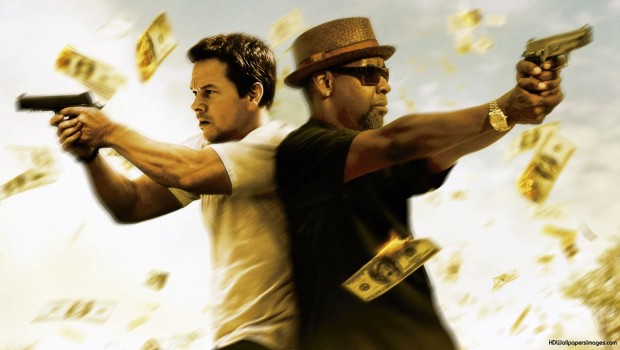 They say to never judge a film by its trailer. However, with 2 Guns, you’d be forgiven for doing just that. This film is exactly what its trailer touts it to be – a bro-friendly buddy comedy where cleavage and bare breasts are inevitable and genre experimentation is almost non-existent. So it’s rather perplexing to hear Steven Grant, the writer of the original comic-book series, describe 2 Guns as an anti-buddy story. Did something get lost in translation?

The plot revolves around Bobby Trench (Denzel Washington), a calm-and-collected DEA agent, and Stig (Mark Wahlberg), a malapropian navy intelligence officer. Initially, their backgrounds are unknown to each other. Under the orders of their respective – and questionable – superiors, they are to team up and rob the Tres Cruces bank to retrieve the safety deposit box of Papi Greco (Edward James Olmos), a Mexican drug lord. It’s all part of an investigation apparently. However, when Bobby and Stig take more money than needed, including the CIA’s $43 million, things get a bit convoluted. In swoops Earl (Bill Paxton), some CIA official, fixated on only one thing – getting back what’s rightfully his, the good ol’ American gun-wieldin’ way.

Of the two leading men, Wahlberg’s is more memorable. He’s a fast-talking jester, a charmer. He’s that stray pup who needs an alpha to show him what’s what, and that excitable pup with no filter when it comes to conversation. So it’s satisfying to see his trickster ways have purpose in the film’s finale, when he outwits the enemies. It’s also nice contrast to the lengthy parts of the film that were torturously boring, with dialogue that didn’t seem to go anywhere. 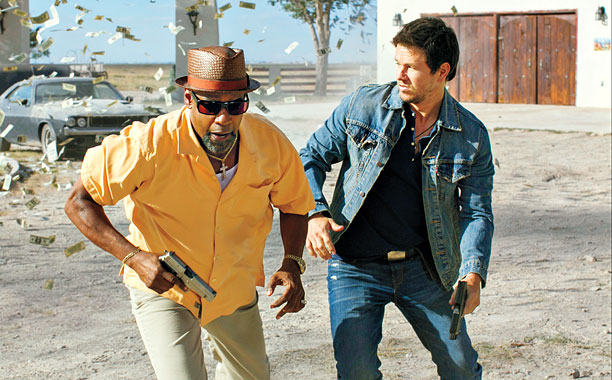 But the standout performance is from Bill Paxton. Is this really the same guy who played that placid treasure hunter from Titanic (1997)? As a tobacco-chewing, Russian roulette-loving villain, he’s downright nasty. The CIA never looked more evil. Paula Patton’s character, Deb, Bobby’s colleague, was disappointing. As the only main woman in the film, she’s more femme fatale than heroine. She’s prevented from gaining any real upper hand in the narrative, and that’s a shame. And the romantic relationship between Bobby and herself just isn’t believable – even if there is some daddy-issue thing going on, as Stig suggests.

In fact, frustratingly, most of the female characters in 2 Guns are relegated to the background. Apart from Deb, they play only supporting roles – bank tellers and waitresses, the gold digger, the petrified veterinary assistant, the carjacking victim. They’re voiceless onlookers and space-fillers. With the recent string of fist-dodging, weapon-trained heroines – the survivalist Erin in You’re Next, the mobster-bashing Hit Girl in Kick-Ass 2, and archer Katniss Everdeen of The Hunger Games trilogy – it’s hard to not see this film as being a bit “out of touch,” as politicians would say. Let’s just hope the sequel, 3 Guns – if there will be one – will patch up that problem.

Even after all the plot twists and revelations – the true reasons behind the bank robbery, the identity of Deb’s ex-boyfriend, the extent of corruption within law enforcement and defence – 2 Guns still falls flat. I wanted so desperately to be proved wrong, that this wasn’t just another one of those buddy-cop-type movies. But in the end, it kind of is. In a round of Russian roulette, this movie would be something along the lines of an empty chamber – much hype, little delivery. I’m just lucky to make it out alive – a silly metaphor, I know.

Summary: It’s rather perplexing to hear Steven Grant, the writer of the original comic-book series, describe 2 Guns as an anti-buddy story. Did something get lost in translation?