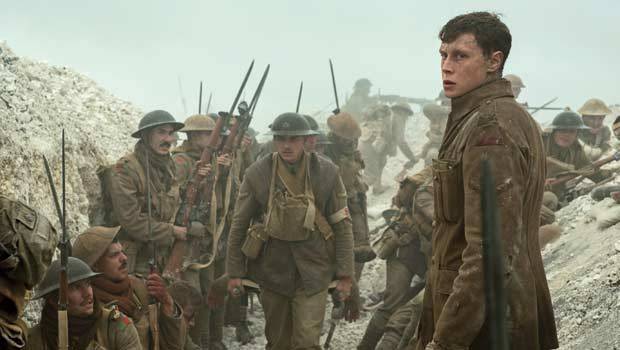 1917 must be experienced on the big screen. Its cinematic form is essential due to an incredible combination of beautiful cinematography, amazing acting, and a brilliant music score that truly separates movies from cinema. Director Sam Mendes (American Beauty; Skyfall) successfully fulfils his aim of honouring his grandfather, who served in World War I, with this masterpiece.

The film is disguised as being filmed in a single take (courtesy of Lee Smith’s sly editing work). It tells a simple story of a journey faced by two baby-faced British soldiers. They are sent on a suicide mission to carry a message across the scorched battlefield of France during the First World War.

Dean Charles-Chapman and George MacKay triumph as the two boyish soldiers. Charles‑Chapman plays Lance Corporal Blake, a cheeky and passionate soldier who has the moral compass of Mother Teresa, while his mate, Lance Corporal Schofield (MacKay), is equally golden hearted but more subdued.

Their message is that an upcoming British attack on the German army is a trap and that thousands of British soldiers will die. Both are given the near-impossible task of delivering the message by their General (a cameo appearance from Colin Firth). The plot thickens because one of those thousands in danger is Blake’s brother (a great performance by Richard Madden).

Before further describing the plot, we must acknowledge the mind-blowing visuals crafted by cinematographer Roger Deakins (Fargo; Blade Runner 2049). The visuals are palpable as the camera follows the two young men throughout an entire journey across country. When the camera is focused on the soldiers in narrow trenches, we feel the discomfort and horror of the tight, grey spaces. In contrast, a shot of the wide‑open French countryside, lush with green grass and flowering trees, would make any sufferer of hay fever sneeze.

The stylistic choices achieve 1917’s goal of immersing the audience into the shoes of soldiers experiencing war. Even with bombs and bullets flying, the violence isn’t glorified, and it remains impossible to detach from the screen. One scene features Schofield running for his life while German soldiers shoot at him. Instead of the audience being fearful, there is complete admiration for everyone involved since the visuals are so beautiful. The film’s visual urgency and beauty further stresses its necessity to be seen on the big screen. 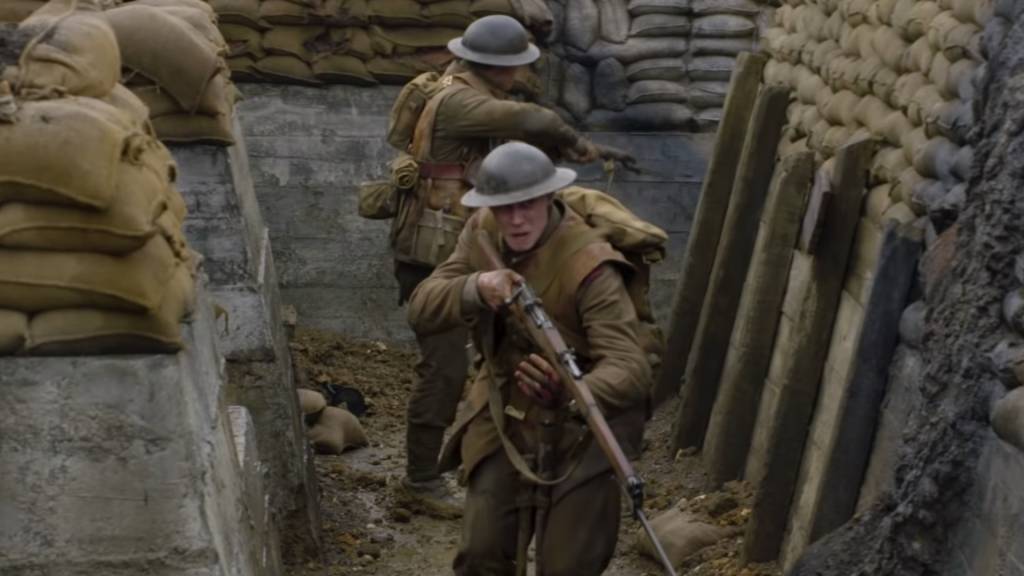 Additionally, the score by Thomas Newman (Wall-E; The Help) is praise-worthy. It rounds out this perfect movie by beautifully complementing the visuals. However, it is not only the technical feats that make 1917 victorious. Co-writers Mendes and Krysty Wilson-Cairns show what masterful storytelling looks like by revealing character through action.

A limited interaction between Schofield and a French girl (a very impressive debut from actor Claire Duburcq) tells us more about their characters through body language rather than dialogue. They speak to each other in broken English and French as they hide from the Germans and try to comfort one another.

When it is revealed that the girl is hiding a baby that isn’t hers, Schofield’s warmth and kindness is illustrated by offering his last rations to the infant. Moments like this make 1917 an incredibly humane film that is driven by amazing acting and unbelievable behind-the-scenes work. It also refuses to deter from showing the physical and mental horrors that war imposes on people.

The violence is not over-the-top or excessive. It is dramatised in what can only be imagined as a realistic balanced portrayal of brutal warfare. Unlike the coldness of Dunkirk (2017), 1917 embraces its characters’ motivations and morals by juxtaposing them against an amazing visual backdrop.

Summary: 1917 must be seen on the big screen. It embraces its characters’ motivations and morals by juxtaposing them against an amazing visual backdrop.