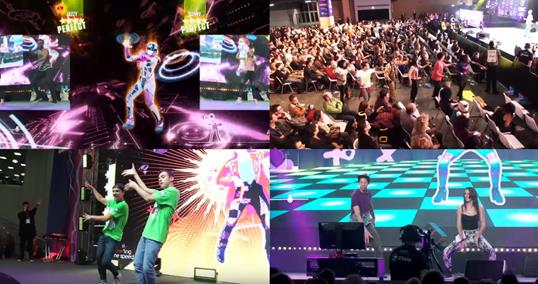 SYDNEY, Australia. February 9, 2016 —Ubisoft® has revealed the latest details on the Just Dance® World Cup (JDWC) 2017 Finals, occurring February 17-19, 2017 during the eSports World Convention (ESWC) Winter) in Paris*. For the third year, Ubisoft is partnering with ESWC, a pioneering and leading international eSports event organization, to welcome the 18 worldwide Just Dancers who won the qualifying rounds of JDWC 2017. Finalists will perform choreography from Just Dance® 2017 and Just Dance® Unlimited, including party favorite tracks like “Single Ladies (Put a Ring on It)” by Beyoncé, “Hips Don’t Lie” by Shakira Ft Wyclef Jean, “Bailar” by Deorro Ft. Elvis Crespo and classics like “Don’t Stop Me Now” by Queen or “Walk This Way” by Run-DMC & Aerosmith.

The Just Dance World Cup 2017 winner will have a rare opportunity to visit the Ubisoft Paris studio for one week, to meet the team and work with the developers, costume designers, choreographers and dancers on a special song that will be created and integrated into the game through Just Dance Unlimited for the next JDWC.

With ages from 13 to 31 years old, participants hail from different countries around the globe including Australia’s very own entrant Just Denz “Denzal”, but are united in their passion for Just Dance. The two-time World Champion Diegho San, from Brazil, will defend his title in front of thousands of live spectators and fans and millions more online. During the three days of the JDWC, players will face off in a series of best-of-three matches to advance to the next round. Both the player’s game score and a jury of Just Dance and choreography experts will ultimately decide who takes the trophy home this year.

“The JDWC is the opportunity for everyone, regardless of where they come from, to come here to compete and that’s awesome. It brings people from all around the globe, only connected through JDWC and it allows the Just Dance family to grow even bigger,” said Diegho San, Just Dance 2014 & 2015 World Champion.

“The JDWC fulfills our ambition to make the whole world dance,” said Marine de La Seiglière, Just Dance Executive Producer. “The JDWC brings a unique touch to the world of eSport competition: not only is this the perfect match between video games and physical activity, but this is a really entertaining spectacle! We managed to make the activity of dancing accessible to all, and I’m proud that we are on the way to doing the same with eSports.”

This year, the online qualifiers in the World Dancefloor mode on next-gen consoles reached a record with an 83% increase in online participation compared to the 2016 Just Dance World Cup[iii]. This promising participation rate supports Just Dance’s ambition to unite worldwide competitors with Just Dancers, in an effort to democratize eSports for all.

* The ESWC Winter Edition, will take place in the Hall 5 of the Parc des Expositions, Porte de Versailles in Paris.

[ii] According to the official Swiss-System Round Mode