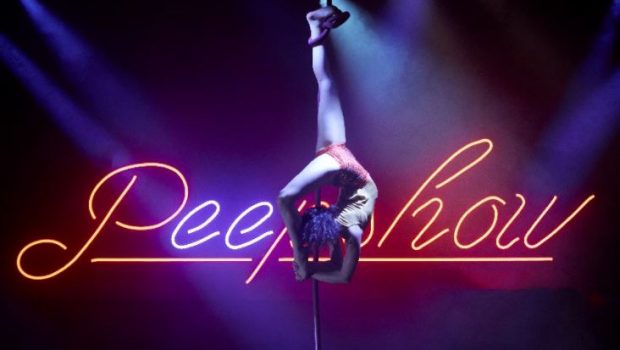 Circa, in an exciting new partnership with GWB Entertainment and Trafalgar Entertainment are thrilled to announce its premiere season at Theatre Royal Sydney 20-24 April.

Tickets on sale now for the strictly limited season www.theatreroyalsydney.com

The internationally successful contemporary circus company based in Brisbane will present two of its incredible shows during the strictly limited season in Sydney. The masterful Wolfgang’s Magical Musical Circus will entertain our youngest circus fans during the day as they enjoy school holidays, whilst Circa’s Peepshow will bring the intensity to the evening when the sun goes down.

“I love that we are presenting two complimentary but different visions of Circa’s work in the same week. Peepshow is hot, sweaty, sexy and tough. Moving from cabaret to nightclub it is full of high energy acts and muscular acrobatics for adults who want to laugh, gasp and feel the burn. Wolfgang’s Magical Musical Circus is a chocolate coated Brussel sprout of a show – an hour of Mozart’s music children love to experience. It’s a hilarious madcap ride crammed with acrobatics and skills and lots of surprises.” said Yaron Lifschitz, Circa Artistic Director

“The Theatre Royal is an iconic piece of the Sydney theatre landscape and its refurbishment is stunning. We are thrilled to present these seasons of Circa’s Peepshow and Wolfgang’s Magical Musical Circus in this special venue with world leading partners GWB Entertainment and Trafalgar Entertainment.” said Shaun Comerford, Circa Executive Director

Richelle Brookman, Director, GWB Entertainment said, “We’re absolutely thrilled to partner with the one of the world’s leading performance companies. What Circa brings to the professionalism of contemporary circus in Australia and the world, is phenomenal. They’re really leading the charge in this space.

We can’t wait to share these two performances with Sydney audiences. If you think you know circus, just wait until you see these spectacular shows – there’s truly something for everyone.”

Straight from the score and onto the stage, the man known as Mozart appears amid a storm of powder, tumbling and twirling, as musical mayhem and movement fuse in this family show with a circus twist.

To those who know him, he is Wolfgang, the dart-playing ratbag. To those who are watching and listening, he is the wigged genius Mozart. Come and discover his irrepressible spirit and vibrant compositions through physical comedy and mischievous antics.

Designed to amaze people from the age of three and upwards, Wolfgang’s Magical Musical Circus reinvents the composer’s magical music in a skillful and illuminating show featuring Circa’s dexterous daredevil artists and a live accordionist. Watch as the notes are physically lifted off the page as performers bring the renowned compositions to life under the eccentric swirl of the conductor’s baton.

★★★★ – “The show is gilded with comedy that had all ages laughing with raucous enthusiasm, and the music keeps the carousel turning at a frenetic pace.” – BRISBANE TIMES

“World-class acrobatics bring to this musical fantasia the high wow factor we’ve come to expect, with the direction tailoring the spectacle into elegantly orchestrated hilarity, performed with an infectious sense of joy.” – SYDNEY MORNING HERALD

Circa’s Peepshow turns cabaret on its head, literally. Join Circa as they embark on a seductive dance through the hall of mirrors that is your imagination, Circa’s Peepshow lurches from the thrillingly acrobatic to the comically playful. Expect teetering towers of balanced bodies, extreme bending, beguiling burlesque, and devilishly precarious aerials.

Under the direction of circus visionary Yaron Lifschitz, Circa’s Peepshow combines some of the finest acrobatic talent on the planet to create a playfully exhilarating ride into the beautifully bizarre recesses of your mind.

Come to Circa’s Peepshow and see the world from the other side of the mirror.

“This is saucy circus that morphs into cabaret and performance art with a killer soundtrack.” – COURIER MAIL