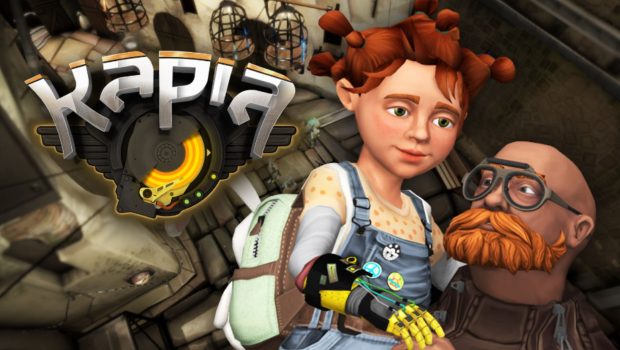 KAIPA is the mysterious adventure of a small girl and her grandfather in the funky apocalyptic world of KAPIA and is developed by 2FOR2, a husband and wife duo who have slated a January 2022 launch for this game. The story of KAIPA follows a retired pilot and a strong-willed grandfather Stefan, who takes on the responsibility of ending the conflict. Little does he know, his most powerful ally will be his small granddaughter, Reny.

Following the collapse of the World Union, the war has struck that divided the planet into coalitions representing “The West” and “The East”. To avoid a mysterious intelligent infection, people are living under lockdown in the protective domes.

Solve the mystery of dome survivors, dive into unique universe of KAPIA to help Stefan and his granddaughter end the ongoing war. Play for both characters in different locations, speak to the peculiar dome inhabitants, join the investigation, discover clues and testimonies to uncover the origin of the violent tragedy, that divided the world.

A traditional point and click flow with an easily accessible drop-down inventory. To make things more exciting we also added a first-person close-up menu where you can interact with various items.

Play for both characters

People have different sides to them, and the same goes for characters in KAPIA. Discover the story from different perspectives as you play for both Stefan and Reny. Follow their own unique paths to achieve a common goal.

Logic and diversity was the key to our work on this most significant aspect of the game. Just like in traditional point-and-click most puzzles are tied up with objects, but there are also conversational puzzles and a whole bunch of logical mini-games.

We selected voice talents from all over the world based on their acting skills and they didn’t disappoint. Each actor brought to the game a part of their own experience making the world of KAPIA truly multinational.

There isn’t much to it–the game is both serious and comical, making it seriously comical.