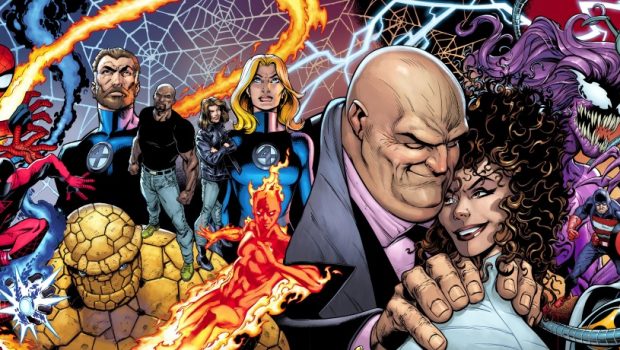 This past week, fans watched as Kingpin unleashed his vicious plan against Marvel’s super heroes in DEVIL’S REIGN #1! Spinning out of Chip Zdarsky and Marco Checchetto’s acclaimed run on DAREDEVIL, DEVIL’S REIGN sees Kingpin, now mayor of New York City, bringing his full criminal and political power to bear down on everyone from the Fantastic Four to the X-Men. And Fisk’s endgame is just beginning. Seen on Mark Bagley’s connecting covers for each issue of DEVIL’S REIGN, Kingpin’s vicious plans are far-reaching and with some of the deadliest villains in the Marvel Universe at his side, he may just be unstoppable.

For years, Fisk has waited for his time to strike, and YOU WON’T BELIEVE the aces he’s got up his sleeves! Check out Mark Bagley’s epic connecting cover below and collect all six over the next few months!