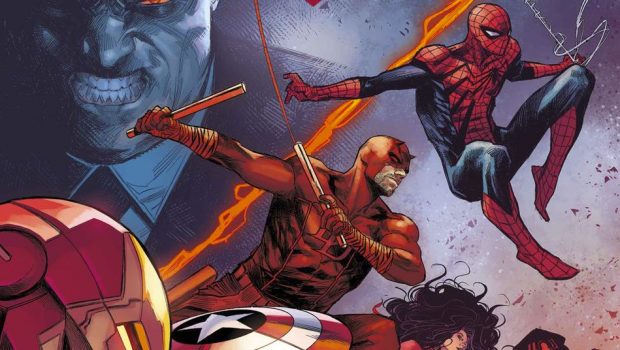 DEVIL’S REIGN, the upcoming Marvel Comics event spinning out of writer Chip Zdarsky and artist Marco Checchetto’s Eisner-nominated run on DAREDEVIL, begins on December 1! The exhilarating climax to years of buildup and developments such as Kingpin’s ascent as Mayor and Elektra taking over the mantle of Daredevil, this far-reaching saga will impact every corner of the Marvel Universe as Kingpin targets the Avengers, the Fantastic Four, the X-Men, and more in his greatest scheme yet. Using his position to outlaw super heroes, willing to expose long-hidden dark secrets about your favorite characters, and equipped with a deadly new team of Thunderbolts, Kingpin has everything he needs to come out on top! Get your first look at what’s to come in the all-new DEVIL’S REIGN #1 trailer, featuring never-before-seen artwork!

“He’s trying to sway the public using cherry-picked examples of various incidents, Matt’s recent troubles being one of them. He’s a politician and he’s actually pretty good at it, which is a problem for our heroes. But, beyond that, he has some aces up his sleeves that are definitely not about politics,” Zdarsky told IGN about his take on Kingpin. “What makes Fisk an elevated threat is his mind, not his fists. That’s always been the case. Sure, Thor could turn him into paste, but Fisk knows that and has planned for it. And Marvel super heroes aren’t about to overthrow democracy.”

Be there for the start of Kingpin’s crusade when DEVIL’S REIGN #1 arrives on December 1!

Art and Cover by MARCO CHECCHETTO