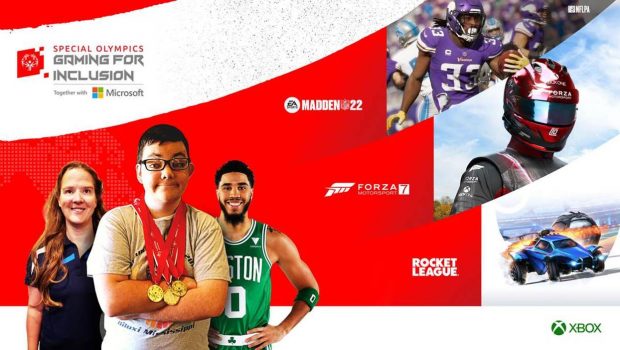 The COVID-19 pandemic has had a profound impact on the world of sports. Many athletes, including those with intellectual disabilities, have been unable to compete due to the cancellation of in-person events. Now, a virtual eSports tournament will unite Special Olympics athletes to compete in a new way, all while experiencing the joys of gaming.

Earlier today, Microsoft and the Special Olympics announced they will partner to host the inaugural eSports tournament, Gaming for Inclusion:

The Gaming for Inclusion tournament provides a meaningful and new way for Special Olympic athletes to compete, and its also a way for eSports to be more accessible and inclusive. For more information on Microsoft’s partnership with Special Olympics, please click here.

From September 12-14, Special Olympics athletes and Unified partners will compete in Rocket League, Madden NFL 22, and Forza Motorsport 7 on Xbox for the chance to play alongside celebrity supporters of Special Olympics, including NBA superstar Jayson Tatum, NFL legend Jamaal Charles, and WWE Superstars on September 18.This experience is the next evolution of the award-winning Xbox Virtual Gaming Event hosted in May 2020, when Special Olympics and Microsoft collaborated on a virtual esports tournament to combat the effects of loneliness and isolation brought on by the pandemic. The event won Microsoft the Corporate Community Impact Award at the 2021 Sports Humanitarian Awards presented by ESPN for using its platform and the power of sport to create meaningful social change.

“COVID-19 and the suspension hundreds of thousands of annual in-person events worldwide meant Special Olympics had to pivot to supporting virtual experiences,” said Prianka Nandy, Chief Information and Technology Officer at Special Olympics. “Our digital transformation partners at Microsoft brought their expertise in developing scalable and accessible digital platforms that allow people of all abilities to build connections with others through the universal language of gaming. Together, we’ve shaped an innovative program that will last well beyond the pandemic.”

Special Olympics and Microsoft are teaming up to host the inaugural Gaming for Inclusion esports experience to showcase the power of inclusion through gaming. The virtual multi-day, multi-game esports tournament will engage and connect people of all abilities from around the world.

“We’re ecstatic to build upon Microsoft’s partnership with Special Olympics, which first began in 2014, to further focus on gaming and host Gaming for Inclusion,” said Jenn Panattoni, Head of Xbox Social Impact. “At Xbox, our goal is to make gaming inclusive and welcoming to all players so that everyone can experience the joys of gaming. This tournament is a meaningful and important step in making esports more accessible and it empowers Special Olympics athletes with a new way to compete.”

All gaming competition will be hosted through Microsoft’s esports platform Smash.gg via a bracket-style tournament that will crown champions for each title. Spectators can live stream the events on the Xbox Twitch channel and the Special Olympics YouTube channel:

After the inaugural event, Special Olympics Programs will have training on how to set up local tournaments through Smash.gg, allowing for year-round gaming practice and competition in preparation for the next Gaming for Inclusion experience in 2022.

Stay tuned to Xbox Wire for more information about Gaming for Inclusion and the athletes who will compete.