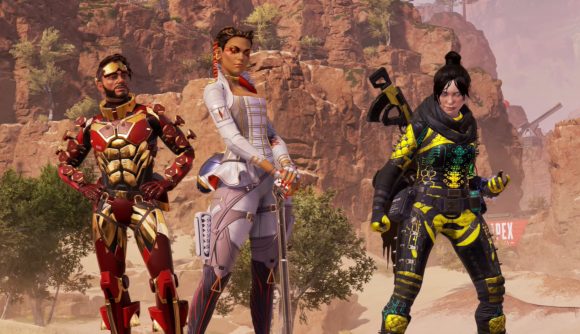 Respawn Entertainment, a studio of Electronic Arts Inc (NASDAQ:EA), is releasing Apex Legends™ on the Nintendo Switch™ today, bringing the revolutionary character-based battle royale experience to even more gamers and those looking to compete away from the big screen. Players on the Nintendo Switch can jump right into the action along with players on PC and consoles in the latest limited time event, the Chaos Theory Collection Event, also available starting today. This event ushers in a brand new town takeover featuring fan favorite Legend Caustic and the introduction of the Ring Fury Escalation Takeover mode for the duration of the event.

“It’s been two years since we launched Apex Legends and we have continued to push the genre forward in meaningful and innovative ways season-to-season with new Legends, maps, weapons, unique modes and much more,” said Chad Grenier, Game Director, Respawn. “We’re also continuing to bring the game to more players on new platforms and with the Nintendo Switch launch, being able to drop in during the current season is a huge win for us. We’re excited to give players a chance to suit up as their favorite Legend even if they are away from their living room. We’ve got a lot of exciting surprises in store this year and we’re going to continue giving players even more ways to compete and for those new to the game more reasons to come play.”

Apex Legends on Nintendo Switch is developed in collaboration with Panic Button, a team known for their best-in-class ports to the platform. Now playable on its smallest screen yet, Apex Legends will feature gyroscope aiming using the platforms controllers and smart optimizations that provide gamers with a target performance of 30fps at 720p resolution when docked or 576p resolution in handheld mode. The game will receive dedicated live service support and will receive simultaneous content updates, limited-time modes and in-game events aligned across all platforms. To get Switch players right into the action, all players on the device will be granted a Legendary Pathfinder skin, 30 free levels for the Season 8 Battle Pass, and double XP if they login during the first two weeks after launch†.

Nintendo Switch players will drop into Apex Legends during Season 8 – Mayhem, which introduced the game’s 16th Legend to the arena, Walter “Fuse” Fitzroy. Along with Fuse’s explosive brand of fun, Apex Legends competitors can also find and equip the new 30-30 Repeater lever-action rifle and Gold Magazine, as they traverse a completely overhauled version of the iconic Kings Canyon map.

Players can download Apex Legends for free* on the Nintendo Switch and enjoy the competition with players across PlayStation®4, Xbox One, or PC via Origin™ or Steam. The game is playable through backwards compatibility on the PlayStation 5 and Xbox Series X|S.