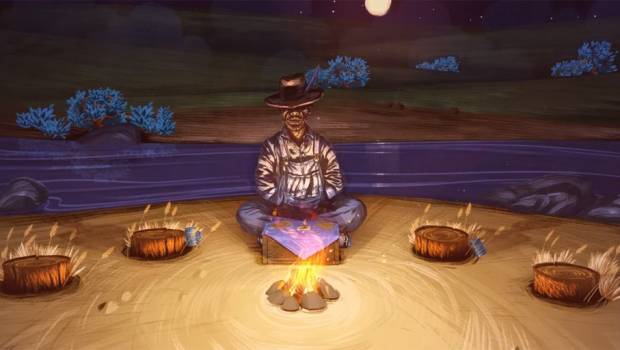 AMSTERDAM – January 10, 2018 – Good Shepherd Entertainment has released a new trailer for Where the Water Tastes Like Wine, the upcoming adventure game from co-developers Dim Bulb Games and Serenity Forge. This latest video reveals the title’s principal voice cast, including renowned singer-songwriter, musician and actor Sting, who voices one of the game’s main stories.

“Where the Water Tastes Like Wine is a unique storytelling experience,” said Sting. “I’m happy to be a part of this visionary collaboration.”

Where the Water Tastes Like Wine is a wistfully imaginative American folklore game about sharing stories and traveling while surviving manifest destiny. Wander through a century of American history, encountering and exploring an eclectic variety of people, perspectives and personal tales along the way. The surreal journey features truly gorgeous illustration from Kellan Jett, combining dramatic 2D visuals with a 3D overworld map of the United States.

Other notable cast members voicing stories are Dave Fennoy (The Walking Dead: A Telltale Games Series), Cissy Jones (Firewatch), Kimberly Brooks (Mass Effect) and many more. The full list of voice talent within the game can be found here.

Where the Water Tastes Like Wine is expected to launch on Windows PC in early 2018.