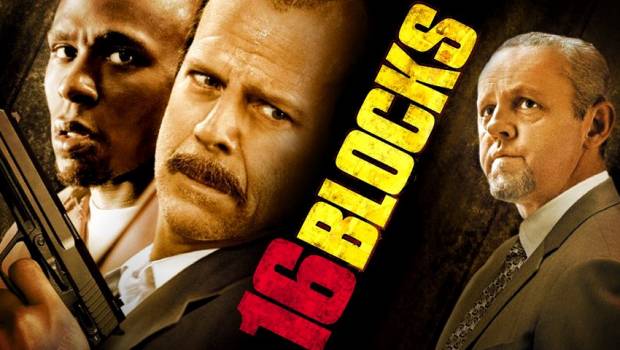 Summary: Willis and Def race across New York city with its less than finest snapping at their heels. A fun ride through a forest of cliches to a touching finish.

Over a career spanning more than 50 years, Richard Donner has proven to be one of the great and bankable Hollywood directors. The Omen, Superman, Ladyhawke, the Lethal Weapon franchise, The Goonies are just a few of the movies he has directed. His producing has similarly been impressive, from the X-Men movies to (err) Free Willy.

All that said, while 16 Blocks is certainly very well directed, with a great sense of pacing and a terrific performance from Bruce Willis, it is Donner in a minor key. The stakes seem so small (get Mos Def’s mumbling character Eddie Bunker to the courthouse) that you wonder at all the high stakes drama injected into it.

That moaning aside, the heart and soul of the movie belong to Willis’s Mosley, a completely burned out and likely alcoholic cop, and the well intentioned Eddie Bunker, who wants to do the right thing by appearing in front of a grand jury and testify. To watch Willis in the early scenes is to observe an actor completely invested in the character – tired, defeated, not willing to do much more than occupy a couch in a run-down apartment while two corpses are cooling in the next room. And yet…

Mosley sees something in Eddie Bunker, perhaps a little of himself before he lost his way. Because Bunker is being hunted by corrupt cops, one of whom was Mosley’s long time partner, played by David Morse. Morse does well in this role, initially playing the steady hand, before his true intentions and desperation are unveiled.

Movies like 16 Blocks, with a tight narrative focus and a lean and propulsive plot, are a great deal of fun to watch. Essentially a chase movie, it brings in New York as a another character, with its crowded streets, run down tenements and the general vibe of a metropolis adding depth and heft to the story.

There are clichés aplenty, of course. Bad cops wanting to silence an informer, a washed out cop who decides to give himself another chance, the criminal with the heart of gold. Chase movies are a dime a dozen, and 16 Blocks is no different, being replete with last minute escapes, fortunate coincidences, and a couple of twists that are believable once, but probably best not to try it on a second time, just to sustain audience believability.

But at the end of the day, 16 Blocks is about one man’s journey towards redemption. One could never say that Willis is a nuanced actor, and occasionally he sleepwalks through a paycheque role, but in this movie, he does run the gamut with his acting performance. It is no mean feat to transform a character from a red-eyed shell of a man to someone who finds himself again while saving the life of someone he has never met.

Special mention should go to Mos Def’s performance. As mentioned before, he does mumble his way through the script. Like Benecio Del Toro in The Usual Suspects, this only draws the audience closer to the character, rather than repelling them. Full of good intentions and a plan for the rest of his life, Def’s Eddie Bunker is the everyman for who we can all root.

There is only one special feature on this disc, which is the alternative ending. Without giving too much away, it is amazing how the exact same words, shot differently with different performances, can result in a wholly different ending. An interesting curio, you can understand why the ending as screen was retained.