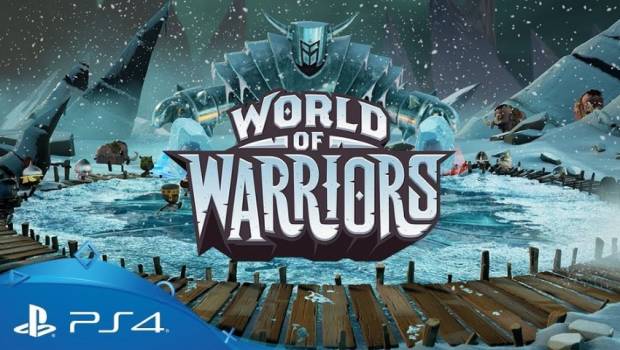 Summary: World of Warriors may look great on the PS4 but it become tedious...

World of Warriors is a Playstation 4 port of the very successful free to play mobile game released in 2014 and will set you back $40. Yes, that’s right. A port of a free to play game that is over 3 years old currently costs more than Horizon: Zero Dawn, Wolfenstein: The New Colossus, Batman: Arkham Knight and many other critically adored AAA titles released in the last couple of years. A string of highly successful indie titles including Gone Home and Stardew valley can also be purchased for a fraction of the price of World of Warriors. So what does it do to justify this price tag? Unfortunately, not a whole lot. Let’s start with the positives. The art style is gorgeous and translates perfectly to a home console. World of Warriors conceit is that a number of different historic warriors have been gathered to do battle across a number of arenas, while you collect an increasing number of unique characters. Think Pokemon meets an elementary school history class. The warriors themselves are adorable chibi like figures that fight in a number of quirky and colourful arenas. You will not be seeing a gruesome representation of combat here; this game is squarely marketed at families with young children. The art is certainly charming and goes a long way towards maintaining interest in seeing new arenas and unlocking new warriors to do battle with.

Speaking of unlocking new warriors, there are no microtransactions in the game! Everything is gained by progressing through the game, which is refreshing for a mobile port that encourages unlocking new characters. Now, on to the meat of the game. The single player mode mostly involves a series of battles that you repetitively grind through to level up your warriors and gain new ones. The different arenas all have different features and add a few gameplay quirks to try keep things fresh. Unfortunately, combat is simple and worst of all dull. There feels like there is very little weight to your warriors mechanically and it very quickly turns into spamming the two attack buttons until you can unleash your special elemental attack. All warriors have one of these, and a weakness that works like rock, paper scissors. If your enemy is weak to your elemental attack, you will bring the pain down upon them. Battles can be livened up by local co-op, but even with a friend by my side we found ourselves very bored very quickly. This doesn’t help when this is essentially all the game is. Grind, repeat. After a couple of hours getting used to the mechanics it just becomes a chore to keep sitting through. Perhaps in the hands of a younger audience the thrill of the battle wouldn’t fade, but I can’t see any adults begging for just one more round.

There is also the option for PvP multiplayer, except so far the audience base is ridiculously small. I was unable to get a match. Perhaps against other players the mechanics of exploiting weaknesses would become more strategic and the battles would become more frantic and fun, but there’s really only so much it could do to paper over the rather thin and repetitive combat. Even for young families, I could not recommend dropping the amount of money World of Warriors is currently advertised at, not when there are so many more child friendly games sitting on the shelves and the PSN Store for a fraction of the price. It looks great, but the game underneath it is so slight that anything more than a few hours of play time becomes tedious.