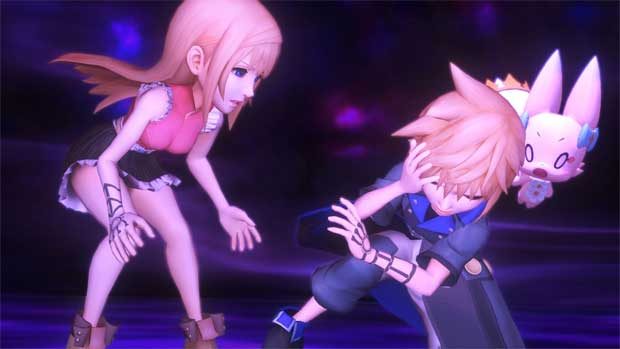 Summary: World of Final Fantasy embraces weirdness and silliness to further itself from its more serious counterparts, while simultaneously revisiting the franchise’s classic roots to create something special.

World of Final Fantasy is the love-letter to Final Fantasy fans I never knew I would enjoy. As an on-and-off follower of the JRPG superstar franchise over its 29-year run, WOFF’s quirky upbeat tone and colourful chibi-stylised aesthetic isn’t something I’d usually be drawn to, and it can’t be more tonally different than the upcoming Final Fantasy XV. However, while WOFF may seem to service a specific type of crowd on the surface, it’s absolutely a faithful tribute to all long-time fans of the series, and one which even does a great job entertaining casual followers like me. World of Final Fantasy is heavily centered on classic linear story-telling, a ton of good old turn-based Active Time Battle (ATB) combat and a whole heap of throwback fan-service packaged in a 40-hour package. It revives monster designs from the course of the series run (Behemoth! Chocobos! Cactuar!) and features appearances and interactions from franchise favourite characters like Cloud and Tifa (FF VII), Squall (FFVIII), Vivi (FF IX), Lightning (FF XIII) – all in cute chibi-form. In between battles, you’ll be exploring the fantasy world of Grymoire, inhabited by NPCs and locations fused from past Final Fantasy entries, and completing side-quests for past FF heroes. But WOFF also introduces new ideas of its own to refrain from relying too heavily on just nostalgia factor. The core gameplay involves battling chibi-sized monsters of classic FF games in turn-based combat, which is customisable to suit casual or veteran JRPG players (ATB or classic turn-based). You then capture and level them up like Pokémon, and either have them act as additional party members for your human characters or “stack” these monsters, called “Mirages” onto the heads of the game’s two main leads for maximum tactical benefit. This manifests in the form of additional abilities in combat, increased stats and higher survivability, but carries with it the penalty of also sharing the Mirages’ weaknesses. Your stacks can be toppled by enemies, and enemies can also form stacks of their own to use against you. The stack mechanic is totally bizarre and silly, but for some reason it really just clicked for me even after the first hour or so of gameplay, and added additional strategy to the standard turn-based battle. The aforementioned Mirages run wild across Grymoire and in order to capture them you need to use fulfill specific requirements for each one before you can use Prisms (pretty much Pokéballs) on them. But they first have to be weakened: If successfully captured, they become part of your party and can be improved by unlocking abilities and passive buffs with each new level, cleanly displayed on an interface not unlike Final Fantasy X’s grid sphere. Mirages can also “Transfigure” into more powerful forms, and learn new abilities for use outside of battle and generally help your human characters (who unfortunately have limited customisation for themselves) progress in the various levels of dungeon-crawling and capturing that form the core of World of Final Fantasy.

For instance, chocobos have the Stroll ability which lets them walk alongside your human party members in the field and detect certain items. Such maps also have obstacles such as ice which need to be melted by Mirages with fire-based abilities like Fira, which can lead to mini-bosses of additional secrets. The extensive level of abilities and customisation coupled with the many different Mirages available in-game to capture helped attach me to my party of cute chibi companions, though it’s clear much more attention was placed on their stats progression than the protagonists. The story is equally as goofy as the stacking mechanic and chibi aesthetic, but in a good way. Twins Lann and Reyyn are an amnesiac brother and sister with strange tattoos on their arms, and awaken to discover their world is devoid of anyone living but themselves. A mysterious figure with god-like abilities appears and informs them they were once masters of taming Mirages, creatures and beasts inhabiting another world known as Grymoire. With their memories of these achievements and their powers lost, they are told they need to travel to Grymoire to re-learn their skills in taming Mirages and use their skills to save the other world from the clutches of the evil Bahamut Army.

It’s all predictably cliché and the whole massive invading army and under-equipped but destiny-bound cast of heroes is all-too familiar. But the leads are infectiously bright: Lann may be the stereotypical doofus brother who says ‘dude’ too much and Reyyn the level-headed foil, but the developers have managed to make both of them bubbly and full of personality. Instead of brooding brats or melancholy warriors, we get a pair of fun and energetic heroes whose reactions to every plot point and new curveball are highly exaggerated and complete with light-hearted cheesy banter. The less-serious flavour of Final Fantasy presented here grew on me quick when it became apparent how much effort the writers put into making you care about them and dialling things down into something more serious when the story called for it. Even through all the high-pitched exclamations and very quirky Japanese-localised-to-English humour, I immediately connected with the core cast and narrative in a way that surprised me – and I’m way more into grimdark than chibi cute-ness. The English voice-acting of the main cast is, in my opinion, excellent and it is evident from the get-go a lot of love was put into the package overall. It made the compelling and zany story which accompanied the core of the game – the enjoyable Mirage capturing and turn-based battling – all the more fun. World of Final Fantasy embraces weirdness and silliness to further itself from its more serious counterparts, while simultaneously revisiting the franchise’s classic roots to create something special. As a casual fan of the series who might not have recognised every single reference, it was still an extremely fun standalone entry. The addictive Pokémon-like monster capturing and training, combined with classic turn-based combat systems (which I love compared to real-time combat), was fun and in-depth, and complimented by a refreshingly upbeat and zany narrative which grew on me the more I played.

So long as you have an open mind to experience something a little less serious than mainline Final Fantasy games and love a ton of fan-service, World of Final Fantasy is worth checking out, even in the wave of holiday games currently flooding the market and its big brother Final Fantasy XV about to launch in the wake of 10 year development cycle.