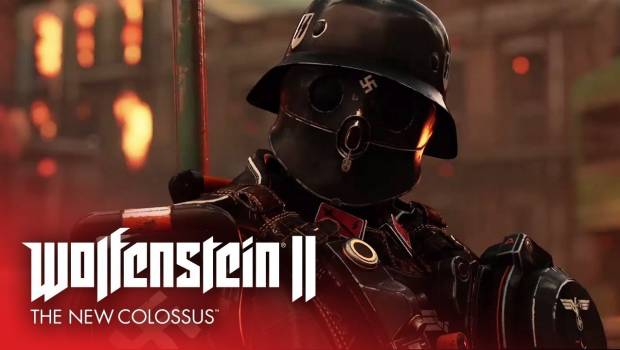 Summary: Wolfenstein 2: The New Colossus on the Nintendo Switch works really really well on this console.

Digressing slightly… I wasn’t a huge fan of the new Doom port for the Nintendo Switch as it just seemed off. So when I was given the opportunity of checking out Wolfenstein 2: The New Colossus on the Nintendo Switch, I was apprehensive, however I can safely say that this game is thoroughly enjoyable on this portable console. Even though this port of Wolfenstein 2: The New Colossus is by the same developers of Doom, Panic Button have managed to create an experience that almost mimics the high-end consoles and more importantly is fun to play in both tablet and TV mode. The only issue while playing this game in the tablet mode is that the text is very and I do mean very small which is a shame. I believe that my eyes are good but I do need to squint.

This game is also the sequel to the 2014 game, Wolfenstein: The New Order, however the developers cleverly add a recap for those who did not play the original in order to bring them up to point. Needless to say, our protagonist William Joseph ‘B.J’ Blazkowicz has had it really tough and after almost being killed in the previous game, he awakes from a coma and is now wheelchair bound.

To make matters worse, their stolen U-Boat has just been attached by the Nazis led the truly evil and psychotic Frau Engel who decapitates a key character before everything once again hits the fan for B.J. as he takes matters into his own hands and uses what means are at his disposal, especially the firepower which literally blows his enemies to smithereens. So once he has the powersuit which allows him to walk again, it’s time for payback in classic Wolfenstein fashion as you fight yourself through post-nuclear Manhattan, occupied Roswell, New Mexico and New Orleans as you attempt to free America from the Nazis. The gameplay works quite well on the Nintendo Switch and the controls are relatively flawless as you explore this detailed environment. Developers Panic Button also implement the motion controls from their Nintendo Switch Doom port which work well, however being an old-school gamer myself, I did prefer the buttons and sticks. However to go full on gamer, a Pro Controller and your TV is a must! Although level design is quite detailed, the game does contain you to certain parts of the map at times which does make it feel a little forced. So while there are numerous ways of taking down your enemies, the silent method is sometimes required as you sneak up behind your enemies and take them down violently in order to prevent alerting your enemies. You also need to stick to the shadows at certain parts in the game that as a result does have some parallels to the Metal Gear Solid franchise or you can just engage in some very brutal melee attacks. So as you explore the various environments, using a plethora of guns to kill the plebs, you also fight some tougher enemies, including bosses which does require you to find their weak spot. Depending on what level you play there are four… the game can be brutally tough, especially when your health and armour is low but this is all part of the charm. The story and supporting characters are great, including the cinematics and of course the villains who are literally to die for. As a result, this game has some great gaming substance. Graphically, Wolfenstein 2: The New Colossus is nowhere as detailed as its high-end consoles, however it does look more detailed then Doom and it runs at a very smooth 30 frames per second, even with so much happening on screen at once. Thankfully at 720p, the difference is minimal while playing in tablet mode and this only becomes noticeable via the TV. Complementing at the graphics is the excellent audio from the sound effects, music to the professional voice acting which really helps immerse you into the title from the get go, especially from Brian Bloom who voices our tough as nails hero. If you played this game on another console, there’s probably no real reason to revisit the title again, unless you’re a die-hard fan. However if you’re looking for a well-made first person shooter with plenty of action and soul, Wolfenstein 2: The New Colossus ticks all the right boxes on the Nintendo Switch as developers Panic Button have successfully ported this game onto a far less powerful console that works like a treat, even with the slight graphical hit!