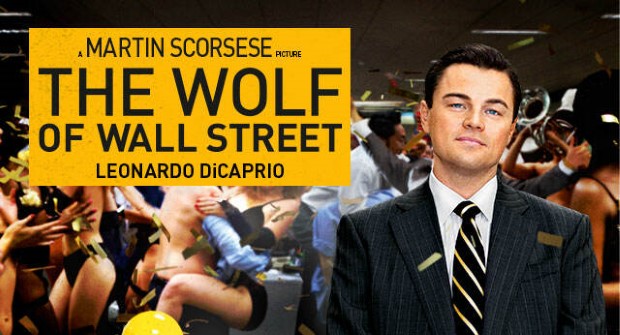 Summary: Easily one of the best films from the crop of best picture nominees for the year, The Wolf of Wall Street is an easily digestible but thought provoking experience that is one of the most entertaining films Scorsese has made to date.

The second collaboration between Terence Winter and Martin Scorsese, after the pilot for Boardwalk Empire, The Wolf of Wall Street ranks among the upper echelons of Scorsese’s esteemed body of work and features a career defining performance by both Leonardo DiCaprio and Jonah Hill.

It seems as if some of Scorsese’s finer works have been coming throughout the latter half of his career and The Wolf of Wall Street continues this trend, following such accomplished efforts as Hugo, Shutter Island and The Departed and standing shoulder to shoulder with earlier classics like Goodfellas and Taxi Driver… Seriously, it’s that well crafted. Based upon the memoir of the same name, The Wolf of Wall Street charts New York stockbroker Jordan Belfort’s (Leonardo DiCaprio) rise to power. Starting tentatively as an underling for a major firm, Belfort is quickly taking under the wing of ruthless and charismatic stockbroker Mark Hanna (Matthew McConaughey) and has his eyes opened to the true purpose of working in the financial sector – To make as much money as humanly possible, often at the expense of the client. After imparting the sage advice of using Cocaine and to constantly whack off in order to take the edge off, Hanna grooms Belfort to embrace his animalistic side and take his place at the top of the food chain.

Unfortunately for this apex predator in training, Belfort finally raises up the ranks to becoming an official stockbroker before watching everything crumble before him on his first day, which just happens to be the infamous Black Friday stock crash of the late Eighties. Left floundering and without the backing of a large firm, Jordan finds himself forced to take a job with a much less reputable (And lucrative) firm located in a strip mall. But circumstances don’t negate talent and Belfort displays an ability to sell penny stocks that is unparalleled, his affluent lifestyle soon catching the attention of his neighbour Donnie Azoff (Jonah Hill), who promptly quits his job in the furniture industry to join Belfort once he catches sight of the latter’s hefty pay cheque.

Teaming up to start their own brokerage firm with the professional sounding name of Stratton Oakmont, the duo slowly expand the business until they’re among some of the richest people in the business, with much of the film showing the extravagant and hedonistic drug fuelled lifestyles they quickly adopt as major power players in the financial world.

This life of excess soon takes its toll on Belfort’s marriage as he leaves his first wife Tessa for trophy wife Naomi Lapaglia (Margot Robbie) and discovers that his taste for money is more insatiable than that for any drug, leading him and his friends to branch out into the world of insider trading. This puts Stratton Oakmont on the radar of FBI agent Patrick Denham (Kyle Chandler), forcing Belfort to look into moving all of his money into a Swiss bank account in anticipation of having to quickly flee America at a moment’s notice.

Pretty soon the overwhelming greed and partying lifestyle inevitably comes to a head and Belfort quickly finds everything he holds dear being put at risk by his voracious greediness. The Wolf on Wall Street is one of the longest film in Scorsese’s oeuvre but also one of his most engaging, with nary a dull moment throughout the entire captivating depiction of a life of excess so bizarre and frenetic it could only have been sourced from real life. The bombastic tale of Belfort’s ascension is as excessive as the lifestyle on display, and all the more richer an experience for it.

The film spends a fair amount of screen time focusing on the debaucherous activities these young men take part in due to their new found wealth, but it also offers an insight into an industry that is alien to most viewers and takes place during an era where everything was up for grabs and greed was good, to quote that other famous cinematic look at Wall Street. The characters presented on the screen are morally reprehensible yet they possess a charisma and rakish charm that make you root for their success, particularly Belfort, which is a remarkable achievement for a film to pull off, especially during this time of economic upheaval and recession where unscrupulous money men are viewed as the enemy.

Showcasing Scorsese’s deft hand when it comes to maintaining narrative structure, The Wolf of Wall Street manages to craft a meaningful story from an ultimately meaningless life, although the lack of focus on the ramifications of his actions or any real major character flaws can kind of make the film come off as boastful rather than a cautionary tale. The Wolf of Wall Street completes Leonardo DiCaprio’s transition from heartthrob to accomplished actor, finally releasing him from the shackles of teen adoration that prevented him from being taken seriously for the first half of his career. Now nearly forty, the last decade or so have showcased the maturation and developing skills of an actor finding his niche, with DiCaprio often acting as Scorsese’s muse (This is their fifth collaboration together).

His commanding portrayal of Jordan Belfort is an award worthy portrayal that is bolstered by a strong supporting cast, particularly Jonah Hill, who shows that his Oscar nomination for Moneyball was no freak occurrence. The Wolf of Wall Street has an impeccable visual transfer, with the high definition 1080p picture resplendent in fine detail and with strong, consistent colours that come off as extremely natural. The film throws everything it can at the screen in terms of changing environments and lighting conditions and the transfer handles it all admirably, with rich, inky black levels and a fine grain to the image. There are no instances of banding or aliaising nor any other flaws with the picture presentation.

Audio is presented via an impressive DTS-HD Master Audio 5.1 lossless soundtrack that offers a precision unparalleled by many comparable releases. Boasting unrivalled clarity and dynamic spacing and directionality, the audio levels are a fine example of technically proficient mastering finesse. The standout scene is the storm scene near the end of the film, with the shifting sound of the waves and the battering wind replicated perfectly in regards to speaker directionality; the less intense scenes are also handled superbly, with crisp and cleanly delivered dialogue rounding out this dynamic audio transfer. There are three featurettes included upon this release; The Wolf Pack is a behind the scenes look at the inception of the story and features countless interviews with cast and crew as they explore the crux of the production, the process of translating the story from the page to the screen and the stylistic choices that helped shape the tone of the film. Also included is Running Wild, another brief look at the process of pitching and making the film, covering the issues regarding getting financing, finding the right crew to accurately realise their collective vision verbatim and much more.

Finally there’s The Wolf of Wall Street Round Table, which is exactly what it says on the tin, giving viewers the pleasure of sitting down at an intimate round table chat with DiCaprio, Scorsese, Jonah Hill, Terence Winter and other cast members as they discuss various aspects of the film, from production design, directorial decisions and their memories of the production process. Overall, a nice collection of extras that enhance the main feature and the Blu-ray release also includes an Ultraviolet copy of the film. A riotous examination of the dangers of giving into the temptation of excess at the cost of your moral core, The Wolf of Wall Street is equal parts hilarious and an astute dissection of the attitudes behind the men who flourished and then dive-bombed spectacularly when the bottom fell out on the market they were taking advantage of and their duplicitous and criminal activities came to the fore.

Easily one of the best films from the crop of best picture nominees for the year, The Wolf of Wall Street is an easily digestible but thought provoking exercise in examining a life of decadence due to unscrupulous means that lingers long after the credits roll and is one of the best films Scorsese has made to date, which is saying something when one considers the calibre of his filmography. Some may find the relentless portrayal of debauchery exhausting and as vapid as the lives of those the film’s portraying, but that’s kind of the point and acts as a commentary on the essentially empty pursuit of happiness through materialistic means.