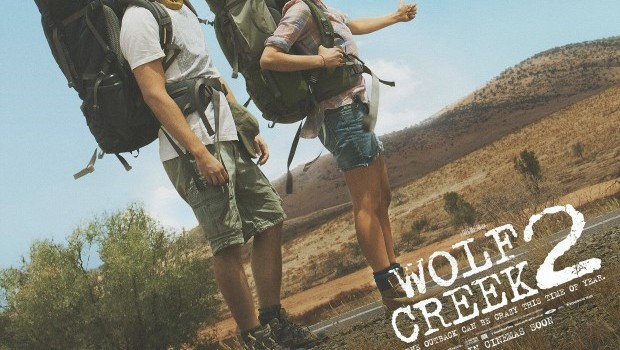 Summary: Wolf Creek 2 is bigger, bolder and bloodier, but not necessarily better.

Head on a Stick It’s this potential that Greg McLean has jumped upon for this much more action packed sequel; as with most horror film sequels, the film becomes less about the plight of the victims and more about the appeal of the antagonist, basically turning him into the main star and draw of the film. Wolf Creek 2 seems to have been made with the explicit intention of turning the series into a franchise, but also inadvertently gives viewers a Mick Taylor that borders on being a xenophobic caricature.

Gone is the glacial pace and effective characterisation in order to make you empathise with the characters – Wolf Creek 2 hits the ground running and only really slows down after an explosive opening sequence to introduce us to German backpacker couple Rutger and Katrina (Shannon Ashlyn and Philippe Klaus) as they travel around the countryside by hitching rides until the finally arrive at Wolfe Creek Meteorite Crater National Park, Mick’s preferred hunting grounds. The film allows us to get to know the characters for a while before they encounter Mick, who casually drives up to their campsite and informs them that camping on National Park property is an offence before offering to take them to the nearest town.

Of course, this being Wolf Creek, things aren’t going to work out very well for the happy couple. The film also introduces some more cannon fodder for the wisecracking Ocker serial killer to toy with, including a British tourist named Paul (Ryan Corr) who stumbles upon the carnage and inadvertently finds himself hunted across the harsh desert landscape by a frenzied and maniacal Mick when he stops to assist one of the tourists. The film then becomes a high octane game of cat and mouse, with Mick commandeering a truck, Duel style, to pursue the panicked Brit; this leads to one of the film’s most memorable scenes (And one that feels like a little nod towards Ozsploitation classic “Wake in Fright”) involving the truck and a pack of Kangaroos who make the mistake of attempting to cross the road, inadvertently getting between Mick and his Quarry.

One aspect of the film that surprised me was the opening sequence where Mick is pulled over and terrorised by some bored Highway Patrol Police despite not having actually done anything wrong. As the officers take sadistic pleasure in being denigrating towards Mick, the viewer actually starts to feel a bit of sympathy for the spinal cord severing bushman. McLean also tries to lend a bit of insight into why Mick does what he does – His rationale is that he’s cleansing his beloved countryside by ridding it of foreign trespassers who have no respect for Australian history or its pristine natural beauty. He’s an exterminator and the tourists are merely vermin that needs to be eradicated.

This xenophobia ostensibly fuels his murderous desires, but one gets the feeling that the true reason he hunts and slaughters tourists is much more simple… He genuinely enjoys it. When the full extent of his twisted desires is shown to encompass rape, forced sodomy and torturous games involving bandsaws and trivia about Australiana, it’s hard to believe that his only intention is keeping out foreign invaders.

One of the biggest problems of Wolf Creek 2 is that Mick spits Ocker quips like a sadistic Australian Freddy Krueger, utilising every cliché quote in the book. The character is played for laughs a lot more in this instalment, so much so that much of the menacing vibe that permeated the first film is not evident here; Mick is now just some cartoonish Boogeyman that has a one liner for every situation. The faster pace robs the film of the eerie and measured build-up of the first Wolf Creek, although this may not be viewed as a bad thing for those who felt that the first half of that film dragged. John Jarratt chews the scenery as the disarmingly amiable pig hunter, clearly enjoying being back in the role that brought him to the attention of international audiences and exaggerating the character’s uniquely Australian traits and attitude to almost absurd levels yet remaining one of the best things about the film. The cinematography and directorial style is also quite accomplished, with still, lingering shots that fully evoke the austere beauty of the Australian outback.

Still, Wolf Creek 2 feels as if it’s lacking something, with the frantic first half of the film paling in comparison to the more intense latter half despite having a majority of the over-the-top action sequences. Indeed, it’s the more intimate scenes that work the best, showing the true lengths of Mick’s depravity whilst moving away from the chase formula which makes up two thirds of the film. Wolf Creek’s visual quality is of the utmost quality, with the arid Australian landscape portrayed in vivid detail; the colour palette is naturalistic, darker scenes don’t suffer from any banding or aliasing at all and the overall image can only be described as flawlessly crisp. There’s a fine grain to the image that adds a gritty aesthetic to the film without compromising the picture in any way and the disc seems to be free of any evidence of sub-standard or maligned authoring processes such as artificial smoothing, sharpening or filtering.

The audio is presented with a lossless DTS-HD 5.1 track that offers a robust and dynamic experience when coupled with a decent sound system. Dialogue is clear and always at the front of the mix, with the audio span across the speakers serving to provide immersive atmospheric effects that seem to envelop the viewer with their realistic speaker placement. The bass heavy scenes rumble admirably and the volume mastering ensures that the dialogue is never drowned out by the incidental effects; overall, the sound design is reference quality. Wolf Creek 2 is relatively light on the supplemental features, including only a commentary track with Director Greg McLean and a handful of deleted scenes. The deleted scenes include an alternate opening sequence that is far better handled in the finished film, a few more scenes fleshing out the characters of Paul and the German backpackers and some grisly shots of Mick doing what he does best. Ultimately though the film left these scenes out for a reason or changed them for the better.

The commentary sheds light on the inception of Wolf Creek 2, detailing how it was written almost directly after the original film and was subsequently put on the backburner and continually revised whilst McLean struggled to find funding and directed Rogue, the surprising revelation that the pair of actors who portrayed the German Backpackers were actually Australian and packed to the brim with a stack of anecdotes regarding the production and stylistic choices and influences used throughout. McLean is a joy to listen to, although like many single person commentary tracks there are a few instances of dead air. Wolf Creek 2 is bigger, bolder and bloodier, but not necessarily better. It really depends on where your preferences for horror films lean. The film is well shot and intelligently made, although the ending is a bit of a cop-out that will leave a bad taste in the mouths of many a viewer.