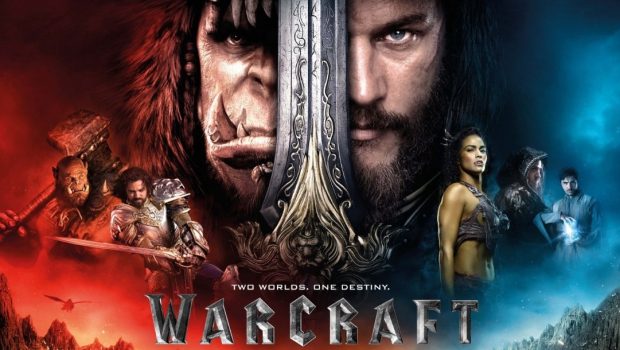 Summary: From humble beginnings the legend finally makes its way to film.

Everyone knows the bad luck that follows the attempts to bring gaming franchises to the big screen… there are some exceptions but usually in a “that’s so cheesy it’s good” style. Warcraft had the pedigree… Blizzard have been known almost as much for their fantastic cutscene cinematics as for their games themselves. So the question naturally started rumbling “when are they going to make a movie?”… well now they have and it’s good! It’s been a long time since I entered the world of Warcraft (and I mean both World of Warcraft and the original RTS games). So some of my knowledge is a little rusty… possibly because of this I was a little hesitant when the film started and all I saw were fairly young faces… I was sure there was some more maturity to some of the key players… but I think my memory may be a bit off on that… or at the very least I was not concerned about it for long. The world that Duncan Jones has built for his film is fantastic! There are some lovely nods to the games, such as the Murloc in the River or the birds eye view of settlements as the camera goes from orc to human to orcs attacking humans. But the CGI department (and the performers who worked with them) is probably where the majority of the praise belongs. Motion capture has come a long long way in the last few years and performance capture is no longer simple limb tracking… we now have the detail of facial expression tracking and it shows so beautifully in Warcraft. There are a number of scenes in which we just have a more or less still shot on Durotan the Orc and you can practically see the thoughts running through his head as he face changes subtly while he survey’s the world before him and what is happening to it. There are scenes in which I wasn’t sure who or what was CGI and what was real. Dwarves and other non humans populate the kingdom and do so seamlessly.

Now I’ve read and heard the “general consensus” on the film and many people didn’t like it. A lot of critics tore into it as they tend to do these days regardless of merit. I don’t know if being a fan of the franchise helps with the enjoyment of the film… or perhaps just a love or enjoyment of sword and sorcery type stories… but I actually felt quite happy with the end result. If memory serves there were concerns from people when the publicity images started popping up about how the orc males are giant and yet the orc female just looks like a normal woman with green skin and some outward jutting teeth… I can say that was one character and they are actually not entirely an Orc… so that got explained acceptably fairly early on.

The main crux of the story is that the Orc world Draenor is dying and they need a new world to move to… their warlock Gul’dan using powerful fel magic opens a portal to the lands of Azeroth. Gul’dan only had enough magic to open the portal for a short while and needs prisoners to sacrifice in order to open the portal and bring the rest of the Horde through to Azeroth. Naturally the people of Azeroth do not take kindly to these invaders and set about trying to stop them. While armies wage war, mages battle to achieve their own goals.

Given the mixed reviews it might be best to see if you can rent this first… I enjoyed it far more than I thought I would but I’ve been playing warcraft since the old days when people would set up a LAN in University computer labs and muliplay before it was cool. If you like the mythos you should find a lot here to enjoy. If you’ve never immersed yourself in Warcraft before… it shouldn’t be hard to pick up and is a fun Sword and Sorcery movie anyway. I think it’s well worth a watch.